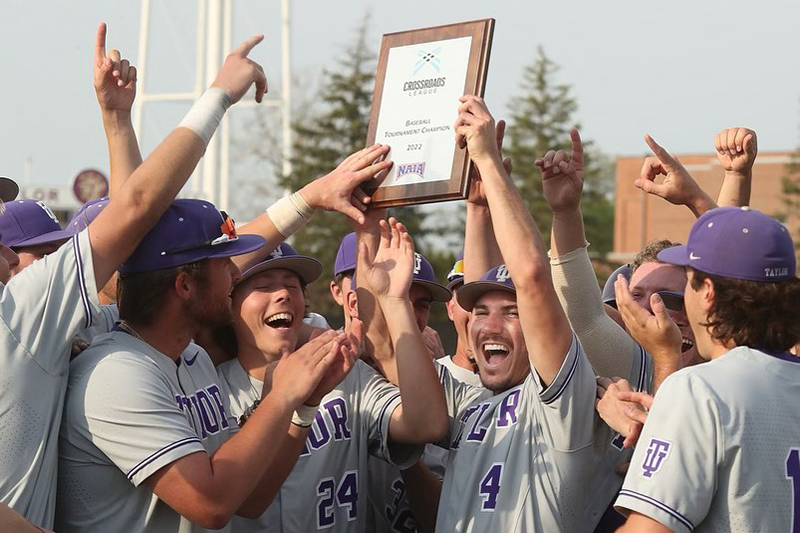 With a longstanding tradition of athletic excellence and academic rigor, Taylor University closed out the 2021-22 school year with six of its seven spring sports teams qualifying to compete in their respective NAIA National Championship Tournaments, along with an extensive list of awards and honors.

Across the six qualifying teams, 91 athletes in total have represented and continue to represent Taylor University in postseason competition this spring. The baseball, softball and men’s golf teams went down fighting at NAIA Nationals last week, and men’s and women’s track and women’s golf will continue their battle for a title in the week to come.

It should also be noted, Taylor’s men’s and women’s cross-country teams both went to nationals in the fall.

Beyond their high athletic performance at the national level, Taylor University scholar-athletes continue to aim just as high in the classroom. While the total number of all-league academic honors will not be known until later this summer, currently 41 academic all-league awards have been collected from MSFA (Mid-States Football Association) and the WHAC (Wolverine-Hoosier Athletic Conference) alone. In addition, to date, nine CoSIDA Academic All-American awards, and 46 CoSIDA Academic All-District honors have been earned by Taylor student-athletes making Taylor University one of the leading universities in the nation on any level (NCAA DI, DII, DIII and NAIA) within CoSIDA’s Academic-All America program.

“These students beautifully represent Taylor, and the Lord, on and off the field,” said Dr. D. Michael Lindsey, President of Taylor University. “I am proud of the tremendous work each scholar-athlete has put into pursuing excellence in their sport, while maintaining a commitment to their academics and community life as well.”

While Taylor continues to celebrate an incredible year for its athletic community, success at this level is not foreign to the school. For nine consecutive years, each of Taylor’s varsity sports has earned NAIA Scholar-Team honors, an award recognizing teams with grade-point averages of 3.0 and above on a 4.0 scale. This accomplishment was achieved by only five other NAIA institutions with at least 18 Scholar-Teams for the 2020-2021 year. Taylor is expected to earn the same honors for the current 2021-2022 year.

“We are thrilled by the outstanding achievement of our athletic programs and the academic recognition awarded to our scholar-athletes, but it doesn’t come as a surprise to us,” said Natalie Young, Associate Athletic Director at Taylor University. “Year after year we are blessed to work with student-athletes who embrace the hard work and dedication it takes to be both highly competitive in their sport while also excel in the classroom. It is truly a unique student who strives for that level of excellence in both realms.”

Taylor University is the number one Best Regional College in the Midwest according to U.S. News & World Report’s America’s Best Colleges annual report. For 175 years, Taylor University has combined challenging academics with the Christian faith and remains the oldest non-denominational school in the Council for Christian Colleges and Universities (CCCU). The University’s graduation rate is the fourth highest nationally among regional institutions, and ninety-nine percent of Taylor’s 2021 graduates were employed or in graduate school within six months of graduation. International study and service are also longstanding hallmarks of the Taylor educational experience, ranking the University sixth nationally for study abroad internships and travel opportunities.