It is an amazing ongoing phenomenon: though dying of a respiratory illness while attending Taylor in the late 19th century, Liberian student Samuel “Kaboo” Morris’ story continues to touch lives as one of the most significant individuals to have influenced the institution since its inception in 1846.

We invite you to learn more about Morris' remarkable life, the people he personally touched, and his impact still today.

A Life Dedicated to God Over 130 years ago, in a small Liberian village in West Africa, Samuel Morris was born Prince Kaboo, the eldest son of a Kru tribal chieftain. While still a child, a neighboring clan defeated his people and demanded Kaboo’s father pay a hefty ransom for his son’s return.

The conquering chief subjected Kaboo to terrible treatment and cruel labor. During one of many intense whippings, Kaboo said he saw a bright light and heard a voice from Heaven telling him to flee. Kaboo recalled the rope binding him fell to the ground; he gathered his strength and ran into the jungle.

Traveling at night and hiding in the hollow of trees by day, Kaboo navigated blindly through a jungle dominated by jungle law. Eventually he arrived at the capital city of Monrovia, the one modern city with thousands of Liberians under governmental law. There, a young boy invited Kaboo to church where Miss Knolls, a missionary and graduate of Taylor University (then known as Fort Wayne College), spoke on the conversion of the Apostle Paul. Kaboo immediately saw similarities between his story and Paul’s. Shortly afterward, he accepted Christ as Savior and was baptized under the name of Samuel Morris in honor of the missionary’s benefactor.

Faith to Move a Mountain

Morris spent the next two years painting houses in Monrovia. He became a zealous member of the Christian community and displayed a fervent desire to learn about the Holy Spirit. Lizzie MacNeil encouraged him to travel to America and seek the instruction of her mentor, Stephen Merritt, former secretary to Bishop William Taylor. With no money or means of transportation, Morris began his journey on foot.

From Liberia to New York

Sleeping on the beach at the Robertsport harbor, Morris waited several days before finding passage on a ship in exchange for work. The journey was difficult; Morris was often beaten and assigned to the most dangerous tasks. However, by the time the ship docked in New York in September 1891, the captain and most of the crew had accepted Christ because of Morris’ witness.

Once he arrived in America, Stephen Merritt warmly received Morris. He contacted Thaddeus Reade, then president of Taylor University, and requested to enroll Morris at the school. Due to Taylor’s financial debt, Reade personally started a fund for Morris. Reade’s effort would later be known as the “Faith Fund.”

In December 1891, Morris arrived on Taylor’s campus (then in Fort Wayne). When asked by Reade which room he wanted, Morris replied, “If there is a room nobody wants, give that to me.” Morris’ faith had such a profound impact on the Fort Wayne community he was frequently invited to speak at local churches. At night, he could be heard in his room praying, which he simply called “talking to my Father.”

President Reade once said, “Samuel Morris was a divinely sent messenger of God to Taylor University. He thought he was coming over here to prepare himself for his mission to his people, but his coming was to prepare Taylor University for her mission to the whole world. All who met him were impressed with his sublime, yet simple faith in God.”

The writers of the 1898 yearbook wrote, "In a little while, every one in the school came to look on Samuel Morris with reverence; all felt that he had an unusually close walk and open communion with God. His insight into the scripture was perfectly marvelous."

On May 12, 1893, Samuel Morris died after contracting a severe cold. His death inspired his fellow students to serve as missionaries to Africa on his behalf, fulfilling his dream of one day returning to minister to his own people. Hundreds of spectators lined the streets of Fort Wayne as Samuel Morris’ body was carried to Berry Street Methodist Church.

Lindley Baldwin, author of Samuel Morris, writes, “The burial ceremony in Lindenwood cemetery, his last earthly resting place, was attended by a multitude such had never before accompanied there.” Morris’ untimely passing prevented him from participating at the laying of the cornerstone at Taylor’s new Upland campus, where he was scheduled to speak and sing.

Morris’ burial at Lindenwood Cemetery in Fort Wayne drew hundreds from near and far. The location of his original gravesite, however, remains unknown. In 1928, Taylor’s senior class had Morris’ grave relocated to a more prominent place in the cemetery and dedicated a new monument. It remains one of the most frequently visited graves in the cemetery. Within months of Samuel Morris’ passing, his incredible story began a journey around the world continuing far into the next century and beyond with a voice that could not be silenced.

Beginning as early as 1891, when Jacob Kichler offered President Thaddeus Reade a five dollar bill marking the first contribution to the Samuel Morris Faith Fund, Taylor has sought to aid others like Morris around the world.

In 1996, after receiving a $3.15 million grant from Lilly Endowment, Inc., Taylor established the Samuel Morris Scholars program. The endowment awarded approximately 125 Indiana high school students with amounts ranging from $2,000 to $6,000. It ended with the 2003-2004 academic year.

When Lowell and Virginia Hatfield learned the original Faith Fund had been inactive for several years, they took action to ensure Morris’ testimony would continue by establishing a scholarship for international students.

Taylor’s connection to Liberia continues through the Sinoe County Association in the Americans (SCAA) and the Samuel Morris Educational Resource and Conference Center in Greenville, the capital of Sinoe County in Liberia.

On a number of occasions, groups of Liberian-Americans from SCAA have visited Taylor to learn more about Samuel Morris and raise awareness of his legacy within the Liberian community. Dr. Charles Kirkpatrick, Taylor University Professor Emeritus, serves as the official University liaison with the SCAA, attending their annual conventions, speaking for their gatherings, and hosting guests to the Taylor campus who express a special interest in the Morris story.

In 2010, plans began to form for the Samuel Morris Educational Resource and Conference Center. Members of the SCAA and Dr. Charles Kirkpatrick traveled to Liberia to meet with key stakeholders and the Samuel Morris Legacy board of directors, the official trustees of the incorporation under which the Morris interests are managed.

They also had a special meeting with Liberian President Ellen Johnson Sirleaf, who was moved by the Morris story and gifts received from the group. President Sirleaf promised to expedite the finalizing of the deed for the land where the Morris center will be built. In March 2013, ground was broken on a 30-acre parcel of land for the multi-purpose complex, named in honor of Samuel Morris.

The following year, a team of Taylor University students and staff, along with SCAA member Elijah Tarpeh, held a 3-day KA-Lite mathematics workshop near Greenville. KA-Lite is the offline version of the popular Khan Academy program. Seventeen laptops with the KA-Lite software were set up in two classrooms. The 64 participating students, ranging from grades 5 to 12, had never used a computer before. The workshop was an overwhelming success, demonstrating that computer-based learning could be effective for students in this challenging environment. 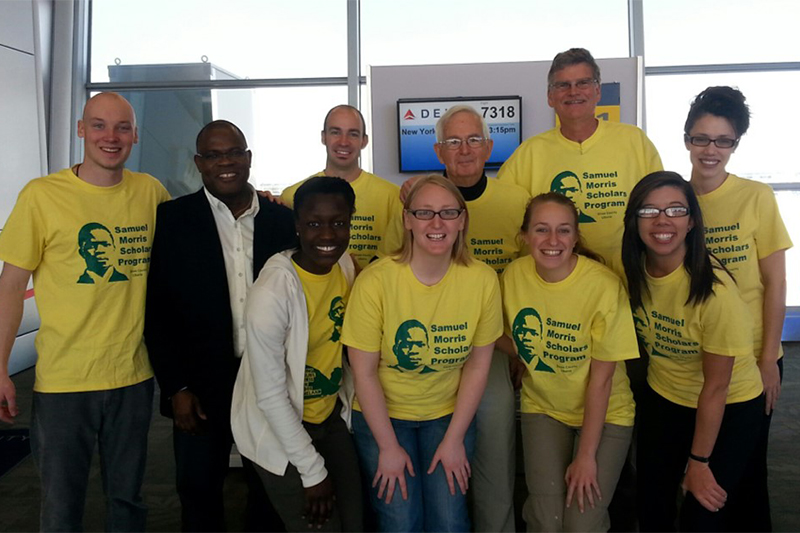 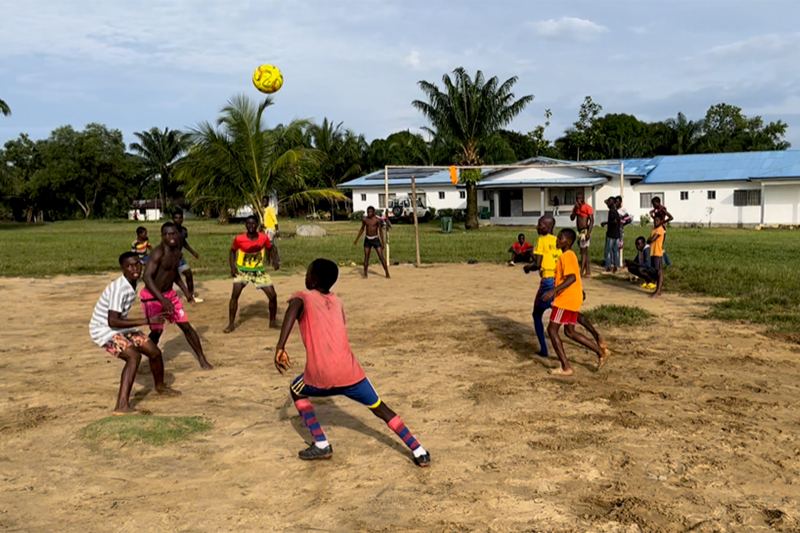 In 2015, Ambassador Enterprises in Fort Wayne assisted Gary Friesen in establishing the nonprofit Innovative Education International (IEI) to launch the Samuel Morris Scholars Program in Liberia. Elijah Tarpeh was hired and deployed to Liberia to run the program. Tarpeh established Innovative Education Liberia (IEL) as the local nongovernmental organization and was appointed as IEL’s first national director. In September 2015 a two-year pilot was launched in eight Sinoe County schools to further study the effectiveness of KA-Lite for learning mathematics. Several hundred laptops were taken to Liberia, along with servers, headsets, flashcards, Samuel Morris biographies, and other teaching materials.

In March 2016, an early prototype of the SmartBox was deployed at St. Paul School in Greenville. Within a year, the traditional laptop computer labs were all replaced with portable SmartBoxes that could be carried into any classroom and securely stored each evening. Smartboxes function for hours without electricity or Wi-Fi, making them ideal in areas with problematic infrastructure. The program became known as the Samuel Morris Scholars Program and the laptop trunks were branded “Sammy’s SmartBox.”

In May 2016, a distinguished delegation from the SCAA and Taylor University, including TU President and Mrs. Eugene Habecker, flew to Greenville for the dedication of the yet-unfinished Samuel Morris Center. It was a joyful and emotional event, featuring the rededication of a life-size sculpture of Samuel Morris that had been flown in from the US a few weeks earlier. By early 2018, the Morris Center was completed and the IEL team was invited to use the Center as its national headquarters and center of operations.

In July 2017, national news services reported that Sinoe County had placed #1 out of the 15 counties on the West African Examinations Council exam for 12th grade students, moving up from #11 just three years earlier!

Since Smartboxes proved to be such a good solution for Liberian students, EIL wanted to see if these successes could be replicated. AcousTech, Inc. was contracted by IEL to begin manufacturing the SmartBoxes. AcousTech is a small Fort Wayne-based engineering firm whose co-owner and CEO is TU 1985 alumnus Jon Roth. The SmartBox has caught the attention of schools and orphanages in developing countries around the world. Today, there are more than 50 SmartBoxes deployed in 19 countries on three continents. Twenty-five of these SmartBoxes are spread across nine of the 15 counties in Liberia.

Today, the Samuel Morris program includes Gospel Y-Clubs in nearly all the Greenville area schools, Bible quizzing, an annual county-wide sports tournament for boys and girls, and a Saturday vocational program where students learn skills such as block-making, gardening, sewing, and cooking.

Everyone in Greenville knows the name “Samuel Morris” as do growing numbers throughout the country, including the highest levels in the Ministry of Education and Liberian government. It’s been more than 130 years since Samuel Morris dreamed of returning to his homeland to teach his people the ways of God. But his dream is coming true! 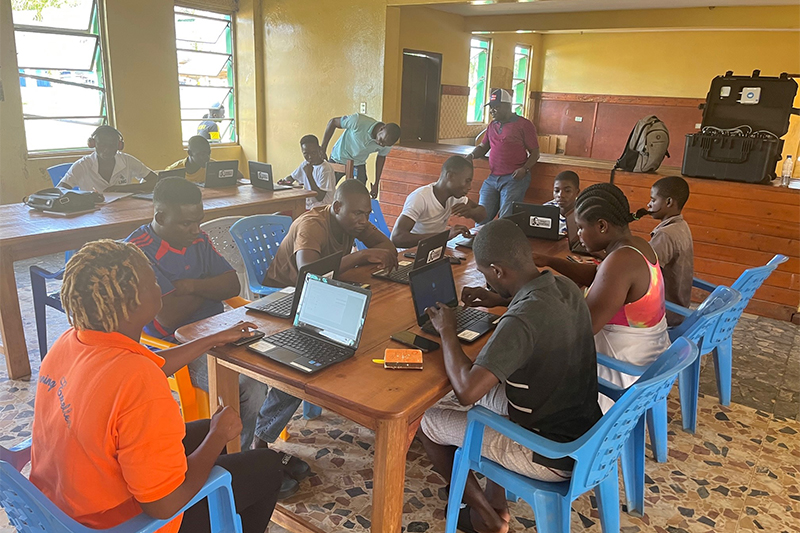 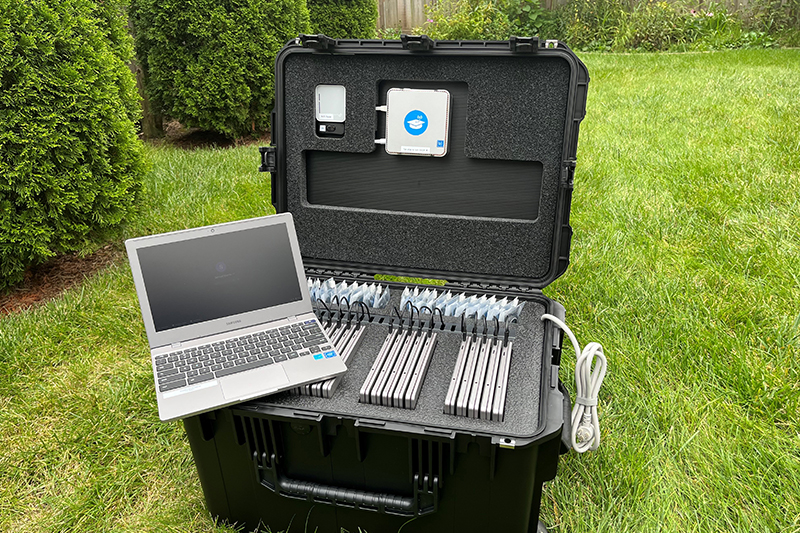 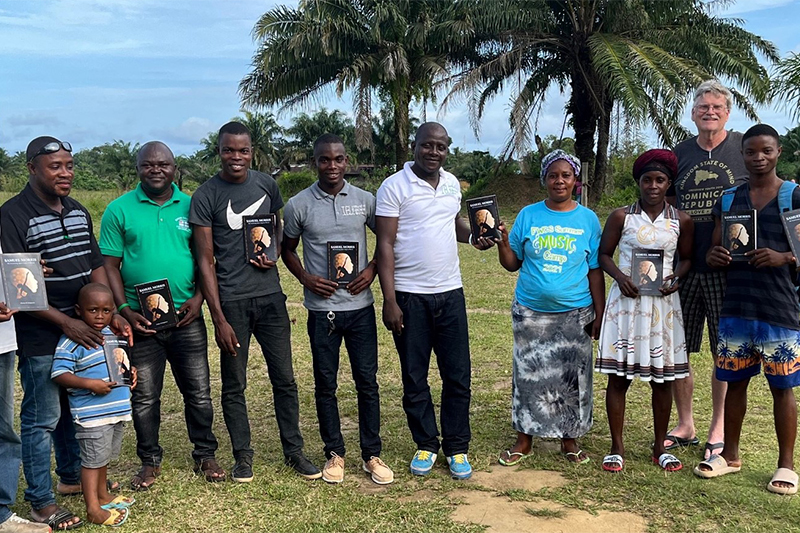 Over the years, Taylor has visually commemorated Morris’ life through the construction of three residence halls and several statues.

The larger-than-life-size statues, first conceived in 1988 by Jamey Schmitz ’88, a Taylor student at the time, were the culmination of a six-year effort by artist/sculptor Ken Ryden of Anderson, Indiana. Two of three statues stand in the midst of a reflection pool, which is in the shape of the Christian fish, Ichthus.

“The story of Samuel’s life deeply touched my own life, and my faith in God has been strengthened,” said Ryden. “I'm hoping the students will see these narrative figures as universal symbols that apply to their own lives.”

The statues, The Moment of Truth, Heeding the Call, and Sharing the Word, are located north of the Rice Bell Tower behind the Modelle Metcalf Visual Arts Center.

The Moment of Truth depicts Morris’ miraculous escape after being kidnapped by a neighboring tribe. In the midst of being tortured by the tribe’s Chief, Morris is seen looking upward where he sees a bright light and hears a voice from heaven telling him to flee. Heeding the Call shows Morris’ journey to freedom through the jungle and his unwavering commitment to obey God’s calling. Sharing the Word reveals Morris’ steadfast resolve to “go into all the world and preach the Gospel” and demonstrates his Christian witness as a Taylor University student. Morris’ life story has been retold in six books, almost a dozen booklets and translated into several languages, including Hindi, New Guinea Pidgin, French, and Chinese. Taylor University has reprinted Jorge O. Masa’s, The Angel in Ebony. This book is available at the campus store.