This project explored the application of chaotic circuits to signal encryption.

Chaos theory is a relatively new science that has gained popularity among people ranging from scientists to the common person.  In everyday usage, "chaos" translates roughly to "a state of disarray" or "madness," but in chaos theory the word has a more precise definition.  Although not everyone agrees on one definition, chaotic systems are characterized by certain qualities:

One incredible application of coupled chaotic circuits is to the field of cryptography.  Chaotic circuits evolve in seemingly random patterns but coupled chaotic circuits can tell the difference between two "different kinds" of randomness.  In one mode, the circuits can synchronize.  In the other they cannot.  Switching between these two modes can be a sort of message.  Because the circuit is behaving effectively randomly, one would not be able to tell the difference in the two modes, in principle.  Only with a particular coupled circuit could one determine the synchronous and asynchronous modes and thus, the encrypted message.

In this project, a simple electrical circuit that can exhibit chaos was built.  The circuit was modeled by a third-order nonlinear differential equation.  Two "identical" chaotic circuits were coupled in an attempt to hide binary signals amongst the chaos.  The speed and accuracy of the decryption mechanism was analyzed.

From different grounds and power supplies, our circuit accurately sent and reconstructed a message with under a 1% error despite an offset voltage of 3V.  Because of the chaotic "noise," coupled chaotic circuits have the potential to be a powerful encryption method.

We designed and build chaotic circuits that can send and receive messages even when the transmitter and
receiver are connected to different power supplies.  The transmitting and receiving circuits can synchronize and desynchronize their chaotic modes to send a binary code.

Chaotic circuits can provide a cheap and accurate glimpse of chaotic systems at an undergraduate level. 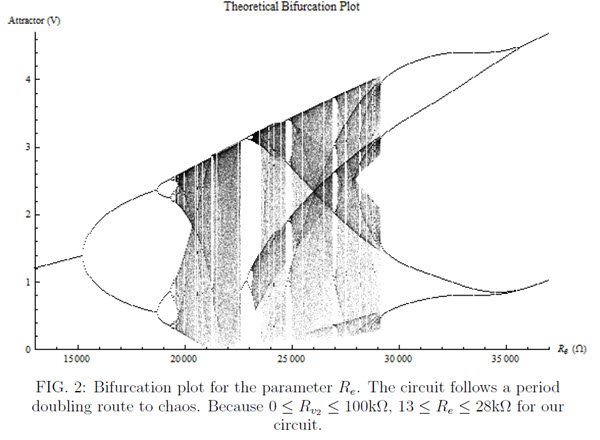 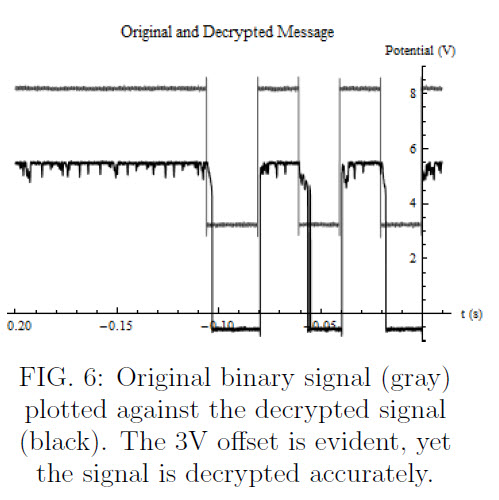