An alternative phase-extraction methodology is presented for high-resolution moiré analysis, in which the projected and imaged pattern is imaged by a charge-coupled device (CCD) array relatively spaced at three pixels per period. The profilometric method uses a photolithographically printed binary pattern with a 33.3% duty cycle symmetrically projected and imaged using telecentric lenses. The resulting surface height map reduces phase error by 33% when compared to conventional sinusoidal projection and extraction methods. The presented system has the ability to resolve surface features with a lateral resolution of <50 μm and a topographical resolution <10 μm.

Moiré interferometry is a well known and useful tool for surface profilometry. Moiré fringes result when two periodic fringe arrays are superimposed: one, a signal array (with period Ps), is associated with surface profile. The other, a periodic reference array (Pr), has a pitch that is unaffected by the surface.

The moiré pattern is of a much larger period; therefore, when Ps and Pr have fine pitches, the moiré pattern is more visible than either of the constituent arrays. However, its phase is directly linked to the phase of each of these arrays. Consider the event where Ps and Pr differ only minutely: in this case, the pitch of the resulting moiré pattern is very large. Therefore, a small change in the signal array relative to the reference array is “magnified” by the moiré pattern. This magnification is what simplifies the quantification of the phase variation and consequently, the surface height extraction.

First, we wanted to determine the relative error introduced by the cosinusoidal assumption of various sub-sampling rates as a function of the resolution of the imaging system (i.e., the quality of focus).  Second, we wanted to investigate an alternative mechanism for extracting phase information from the moiré pattern resulting from the interference of two binary fringe patterns (a projected binary pattern and the imaging CCD array itself ), and to compare the predicted error of this method to that associated with the cosinusoidal approximation.

A coin (US quarter dollar) was selected as the subject surface on which to demonstrate the effectiveness of this alternative phase extraction approach.  In the alternative binary method, the standard deviation of a 3025 pixel (∼2.5 mm square), nominally flat region in front of the chin on the coin was 1.93 μm. This means that the minimum detectable deviation for a single pixel in this 656 pixel × 491 pixel image (which would require 4.5 standard deviations) would be 8.7 μm. The standard deviation of the same region in the conventional cosinusoidal method (in which the projected fringe pattern was not binary, but an actual half-toned cosinusoidal pattern) was 2.85 μm, yielding a minimum detectable deviation of 12.9 μm for a single pixel. Thus, the alternative method presented here achieves a 33% reduction in the minimum sensitivity.

We have developed an alternative method for extracting the phase (and ultimately, the associated surface height information) from a projected binary pattern.  Theoretical models indicate that the novel phase-extraction method should outperform the sinusoidal approximation approach for any imaging system whose diffraction limit is 20% or less of the binary pattern period.  The experimental results support this prediction by indicating that this alternative phase-extraction method outperforms conventional sinusoidal analysis, even when the projected pattern is in fact sinusoidal, by achieving a 33% lower RMSE. 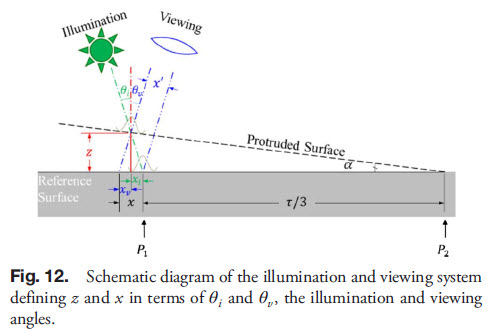 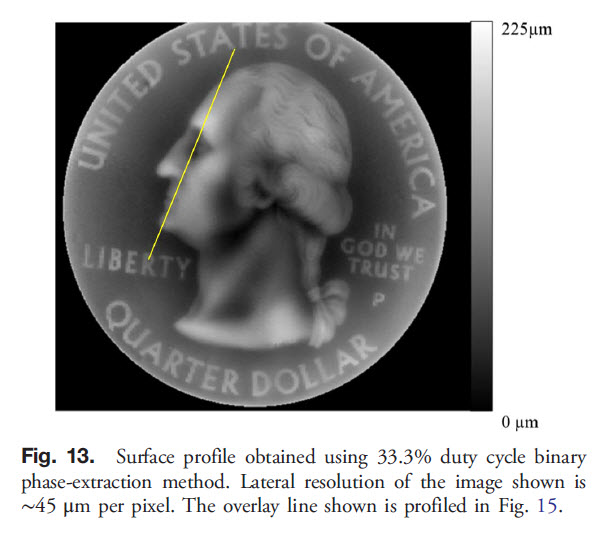 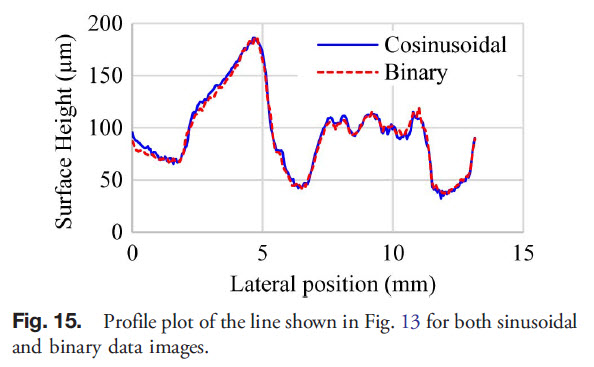