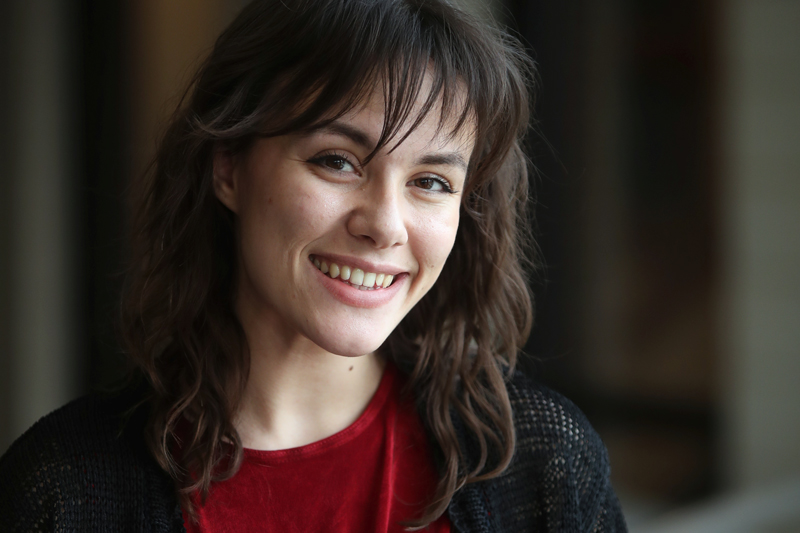 At Taylor, the liberal arts are a fundamental part of the ways students learn and grow to view the world. The integration of faith and learning across areas of study allows students to make connections between different subject matters and have a deeper understanding of the world around them.

For Musical Theatre major Hannah Embree ‘22, her work with liberal arts intersecting with the production of theatre led her to being awarded the Kennedy Center Literary Managers and Dramaturgs of the Americas (LMDA) Dramaturgy Fellowship.

Dramaturgy is the art of maintaining artistic integrity to the script of a play. The dramaturg’s role is to do extensive research on the play - its script, production history, reception, and the intention of performance. They work closely with the director of the play to ensure the vision of the production is seen to completion.

“It’s really a leadership position,” said Embree. “You’re working with both the artistic team as well as the actors and the audience, too. You know who you’re telling the play to.”

Because the role of the dramaturg requires a broad scope of knowledge, Taylor’s liberal arts program proved invaluable to Embree and her work. Being exposed to classes outside of her field of study helped her develop a wider understanding of the research that she did for her dramaturgy work.

“A liberal arts school is a really good place to do theatre,” Embree said. “Everything you do and everything you learn feeds your work as a theatre artist.”

Artistic Director of Theatre Tracy Manning chooses plays for the season at the beginning of the academic year. For the 2020-2021 school year, Student Body, a play that addresses sexual assault on college campuses, was chosen to be performed in the spring semester. Embree had been hoping to do dramaturgical work for a performance, and this was a perfect opportunity.

“Student Body deals with a lot of really heavy subjects and I really wanted it to be done with a lot of intention, safety, and and a recognition of the intimacy of the topic of sexual assault,” said Embree. “I went into the production with a lot of desire to speak truth about something that is often swept under the rug, especially in a Christian environment.”

Embree's role as the dramaturg for this production was unique, because the Theatre Department partnered with Student Development to incorporate the show into Taylor’s annual Sexuality and the Body week. This week offers programming that gives students a chance to grow in their understanding of God’s plan for our bodies. Chapel speakers and evening programs spark open discussions and insight.

This year, talk-back sessions were held after every show featuring Student Development staff and people who were involved in the theatre production. Student Body was performed for free in the Euler Atrium. Alumna Esther Neel was a guest director, so Embree was working for the first time with someone new.

Recognized by the Kennedy Center

Each year, the Kennedy Center sponsors the American College Theatre Festival, an event that strives to honor, recognize, and strengthen collegiate theatre programs around the country. Following the encouragement of Manning, Embree submitted her dramaturgy work with Student Body for consideration.

Embree’s case book for Student Body contained all of her research: statistics, psychological research, analysis of the play, previous production information, and anything else that informed the work that she did with the play. She included discussion guides that Embree developed with Student Development, notes from the talk-back sessions that followed the performances, and photos from advertising displays that she created. She sent an online version of her case book to the festival and presented it to a panel of professionals and answered their questions after her presentation.

Following virtual workshops throughout January where she worked with other dramaturg students and learned from industry professionals, Embree was selected as one of nine national finalists. Finalists receive an all-expenses paid residency at the National Theatre at the Kennedy Center and membership in the Literary Managers and Dramaturgs of the Americas.

“I now have access to jobs that I wouldn’t have access to before,” Embree said. “It’s a really big honor. That can open up a lot of doors for industry connections, apprenticeships, graduate schools, all sorts of things like that.”

Embree will be attending a residency in April for the National Festival at the Kennedy Center. She will be working with a Shakespeare festival in a performance role after she graduates in May, with rehearsals beginning before graduation.

Taylor’s Theatre Program gives students the opportunity to work extensively with their craft as a way to glorify God. Students of all majors can be involved in Taylor’s theatre productions.

“Taylor is a gem for theatre,” Embree said. “This is a place where we’re going to call you to a pursuit of excellence and a pursuit of beauty and truth. This is a palace where every play that we have is chosen has intention…we choose plays that meet needs in our community and address our own humanity in a really difficult and good way.”