The Eicher family: Four Taylor Generations Living For a Purpose 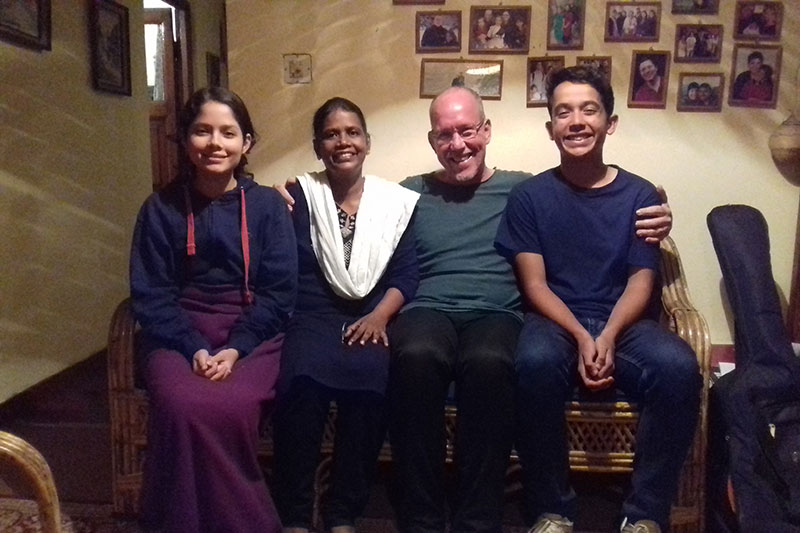 For a student from Mumbai, India in the late 1980s, the two pillars of light of Rice Bell Tower illuminating the night sky helped Andi Eicher (’92) see the possibility of living life as a Christian with his “eyes wide open.”

Andi arrived on campus as third-generation Taylor student. Grandfather Elmore (’26) was the first Eicher to arrive in Upland as a missionary kid from India, returning to serve in India after graduation. Andi’s father Raymond (’63) followed suit, leaving Taylor with a heart for evangelism in India. Now daughter Asha (’23) is on campus, arriving from India last summer, her first time in America.

Taylor’s commitment to spiritual integrity and academic quality—illustrated by the Rice Bell Tower’s two light pillars of ‘Faith’ and ‘Learning’—spurred Andi to see deeper that “all truth as God’s truth” and embrace a life lived for a purpose.

“Taylor allowed me to see that it’s possible to ask the big questions; that you may not have all the answers immediately, but God will push you through to get you to the right place,” says the fourth-generation missionary. “There was a further deepening and understanding that my faith and my vocation, my faith and learning, needed to be integrated—and that was the mantra of Taylor.”

After graduating from Taylor, Andi did graduate studies at Yale University and then returned to India to work in a village hospital. It was during this time that he met his wife Sheba, a family medicine doctor.  Early in their marriage they lived in Mumbai and worked with people with HIV and AIDS. A two-year commitment turned into 14 years of working with local churches to care for people living with HIV in their homes. From there, they were called back to northern India to work out of a mission hospital, Sheba in clinical and community palliative care and Andi in community health and development.

This year the Eichers sensed God calling them to take up a new responsibility in a remote part of eastern India, straddling the border where north meets south. An initial prayer survey journey was itself symbolic. “The tar road ended, and it was dirt roads; up into the hills we went, until we came to this hilly area surrounded by hills in all directions—with no sign anywhere of what is known as ‘civilization’,” says Andi.

“I looked around and sensed this is the end of the world, this is the place where God wants us to be. The village we were visiting was a tribal village. For the first time in my life, I saw men holding bows and arrows. But I also saw something remarkable. I saw an adolescent with a bow and arrow in one hand, and a cell phone in the other hand. And I knew, modernity is coming.”

This new assignment is in a place where each tribe has their own language, their own way of living, and where the Bible is slowly being translated in their native languages. With eyes wide open, the Eichers are asking: how can we help these people preserve their language and their culture, and help them flourish in a way that is honoring to the King of Kings and Lord of Lords.

“We want to see people love Jesus and form worshiping communities,” says Andi. “In our country today there is much distrust of Christians, of missionaries. But we believe that if God’s people follow His Word, live out His life, and speak about what they have experienced, that His wisdom and His glory can be seen right here, right now.”

Andi and Sheba have much hope for their daughter Asha (whose name means ‘hope’ in Hindi) as she concludes her freshman year as the fourth generation of the Eicher family to attend Taylor. Their hope is that Asha too will live her life for a purpose, speaking God’s truth into an often dark world. They know that Asha is able to attend Taylor—like so many students—thanks to generous supporters who made her scholarships possible. The Eichers are continuing to trust God to provide as she looks to begin her sophomore year at Taylor this fall.

This May, Taylor University is seeking 500 individuals to make a gift as the Lord leads. When you give, your donation will be matched thanks to generous lead donors.

Would you prayerfully consider making a gift in May?