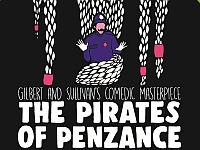 Taylor University Lyric Theatre will present Gilbert and Sullivan’s comic musical masterpiece The Pirates of Penzance in the Butz Carruth Recital Hall on February 2 and 3 at 8 pm and February 4 at 2 pm. The story follows a band of Pirates who clash with an English Major General and seek to marry his many daughters.

Librettist W. S. Gilbert and composer Arthur Sullivan collaborated on 14 comic music operas that included not only Pirates of Penzance, but also  H.M.S. Pinafore and The Mikado

Taylor University Lyric Theatre is part of Taylor's Department of Music, Theatre and Dance and was recognized in 2015 and 2017 with national awards for productions of Amahl and the Night Visitors and Gianni Schicchi.