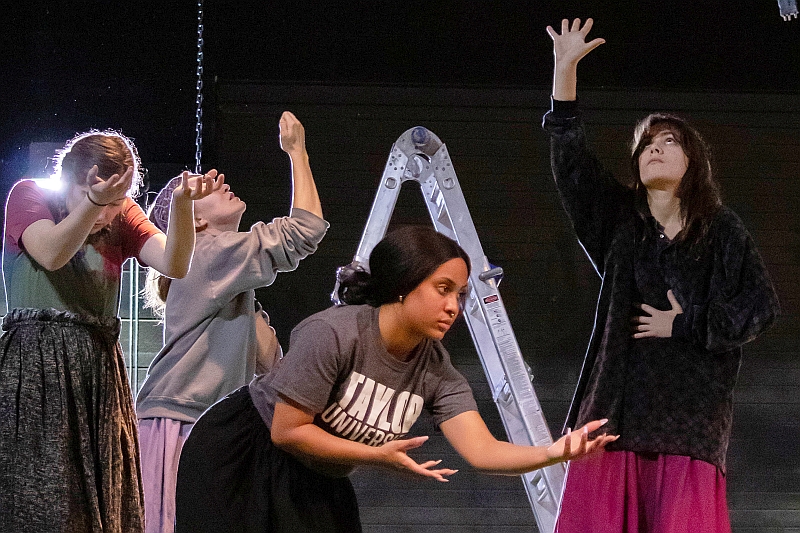 The Taylor University Theatre is presenting Deborah Baley Breevort’s The Women of Lockerbie.

The Women of Lockerbie is a poetic drama about the ultimate triumph of love over hate. The play is set in December of 1995, seven years after the terrorist bombing of Pan Am flight 103, which exploded over the small Scottish town of Lockerbie. Madeline, a mother from New Jersey, roams the hills looking for her son’s remains that were lost in the crash. Madeline and her husband meet the women of Lockerbie who are fighting the American government to obtain the clothing of the victims found in the plane’s wreckage and transform the tragedy into something redemptive by washing them and returning them to the victim’s families. The New Yorker calls the play “a moving, thoughtful exploration of how grief changes over time.”

Director Tracy Manning says, “One of the reasons that I chose the play is that I think we have a lot right now to grieve. Sitting in the middle of a pandemic, political divides, and health crises—I think we’ve lost some things that we’re trying to figure out how to grieve. And I think that we probably have found seeds of hatred taking root in our hearts. Perhaps we need a space to recognize things we’re grieving and find ways through toward healing and hope. We wander the hills of our own grief like Madeline does, but we can be called out into something that’s resurrection, that’s life giving.”

The Women of Lockerbie will be performed in Mitchell Theatre, on the Taylor University campus on October 29–31 and November 5–7 at 2 and 7:30 pm. Come and take part in what Variety calls “a stunning display of raw emotion, a powerhouse drama, a masterful and cathartic experience.”

The play is directed by Tracy Manning with choreography by Taylor alumna Suzie Quinn. The Women of Lockerbie performs October 29–31 and November 5–7 at 2 and 7:30 pm.

Audience members are encouraged to purchase their tickets in advance by contacting the box office: 765-998-5289 and boxoffice@taylor.edu.