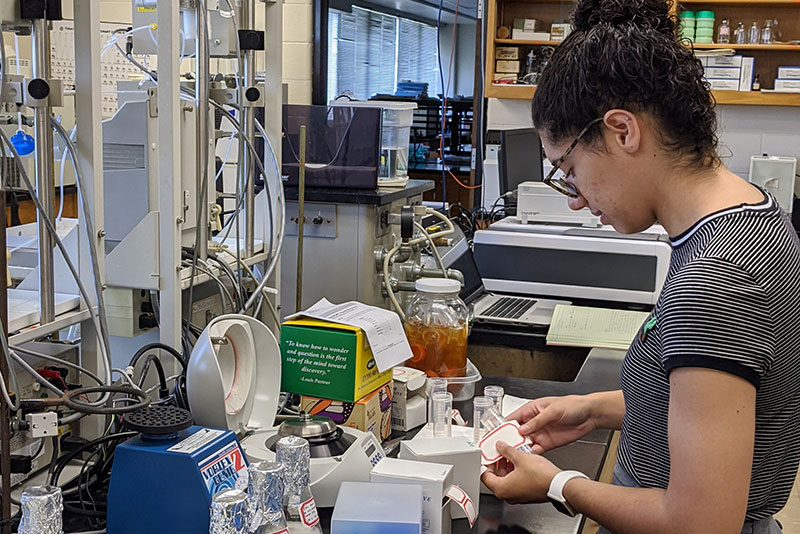 Malaria is a preventable disease that affects millions of people across the globe, the majority in Sub-Saharan Africa. For Taylor Professor of Chemistry Dr. Daniel Kaluka, researching the vulnerabilities of the malaria-causing parasite isn’t just a job: it’s personal.

Starting as an undergraduate student in his native Zimbabwe, Kaluka has studied the biochemical makeup of the parasite. In places like Zimbabwe that are especially prone to malaria cases, malaria accounts for between 30% and 50% of outpatient appointments. This mosquito-borne illness affects all ages, with young children being among the most vulnerable. Although malaria is preventable, many developing countries continue to struggle in their efforts to treat the disease in humans and stop mosquitoes from spreading it. According to the World Health Organization, billions of dollars are spent every year to control and prevent the disease.

Studying Hemeproteins in the Malaria Pathogen

Today, Kaluka is working on one piece of the malaria puzzle. Along with Taylor Chemistry and Biochemistry students, he’s conducting research on the structure of subcellular particles called hemeproteins.

"Hemeproteins have several important functions in the body including oxygen transport and drug metabolism," Kaluka said. “The malaria pathogen also contains hemeproteins, but we’re still learning about the structure and function of them. The structure of protein will give us an idea of the function of protein. If the function becomes clear, it may be a starting point to design drugs that can control or kill the pathogen.”

Here’s a quick primer on how the malaria pathogen works: when it enters a human host, it travels to the liver and reproduces itself. Once they start breaking down liver cells, they move on to infect red blood cells and eat hemoglobin. They use amino acids, which are located around the heme. However, they can’t eat heme because it’s toxic to the parasite. They detoxify the free heme by attaching them to each other in a string, or polymer. Drugs like chloroquine stop the chain from forming, and the parasite is then exposed to the free heme and can’t grow.

In 2002, the whole genome of the malaria pathogen was sequenced for the first time and could be studied. Within those genes, there are several heme-containing proteins. This begs the question: how does the pathogen deal with these hemeproteins within their own DNA structure? Kaluka is working to study those genes, express the protein that have no known or defined function, and then understand the biophysical character of the structure.

“If we understand the structure, we may understand what the function is, and then target it with drugs,” he said.

Kaluka hopes that his research will help the scientific community approach treating the malaria pathogen before it enters a human host. While insecticide-treated mosquito nets have been used, the problem is that the parasite mutates and the mosquito becomes resistant to the insecticide.

Instead, Kaluka wants to target the parasite, not the mosquito. If a drug can be developed that stops the parasite from progressing within a mosquito, the mosquito will stop spreading the disease.

“Heme plays a critical role in the mosquito stage of the parasite, therefore the hemeproteins-requiring processes of the pathogen are most vulnerable when it’s in the mosquito host,” Kaluka said.

Although the COVID-19 pandemic curbed his plan to conduct research with students during the past spring semester at Taylor, Kaluka plans to continue his work so that as soon as it is safe for students to return to campus, they’ll be able to be a part of this extremely important research.

“In our lab, we amplify the gene of the hemeprotein and clone it in a vector so we can make the protein in the lab. Once we make protein, we do biophysical characterization of protein. Do they bind heme? If they bind heme, what is structure? Do they have the function that we think they have? If they give us the function that we think they’re giving us, then we can document it.”

“If that’s different or essential for the parasite to survive, then we can target it for developing new drugs.”

Kaluka just joined the Chemistry department faculty at the beginning of the 2019-2020 school year, and is enjoying teaching and working with Taylor students.

“They want to learn! They are interested in what we’re doing, and that always makes it more fun.”

Study Chemistry and Biochemistry at Taylor