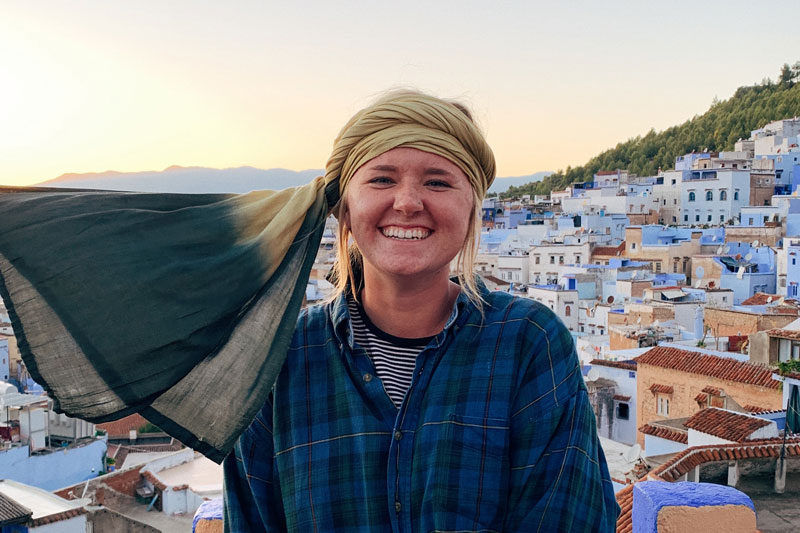 For Madeleine Burkholder (‘19), studying Biology Pre-Med provided her with the tools to discover her passion for helping vulnerable populations. She is now earning her master’s degree in public health at Saint Louis University and one day hopes to work with refugees—a passion she discovered during a Taylor trip that would change the trajectory of her life.

When Burkholder first arrived on campus as a freshman, she was pleasantly surprised to learn how deeply her biology professors cared about her. Looking back, the lessons they taught her about both biology and life remain with her today, and she is especially grateful for the perspectives they instilled in her.

Outside of the classroom, Burkholder played on the lacrosse team, took a job at Indiana University Health as an operating room assistant, and worked with Taylor’s InVitATION program for disease prevention.

While Burkholder’s hands-on experience was incredibly valuable to her, her biggest advice to students is to get to know Taylor professors as she did.

“They are some of the coolest human beings and I’m so thankful for them,” she said. “They are so intentional and some of the most genuinely kind, caring people. I challenge students to get to know them on a personal level and not just as a professor-student interaction. You’ll get so much out of it in ways they can challenge you in your faith and personal life and the way you interact with the world.”

Professor of Kinesiology and InVitATION program leader Erik Hayes was one professor who shaped Burkholder. Every week, they would have thoughtful conversations about current events, and he always challenged her to articulate and defend her opinions with facts. Burkholder said she learned to converse better because of his guidance and she believes her newfound passion for preventative health originated with him.

Burkholder also got to know Assistant Professor of Biology Jessica Vanderploeg through both classes and lacrosse, since Vanderploeg was the lacrosse team’s faculty sponsor at the time. Burkholder said she shaped the way she viewed herself and gave her the courage and determination to go after what she wanted. She assured Burkholder that if she worked hard she would succeed—so she studied hard and took the MCAT exam to begin applying for medical school as soon as possible.

Burkholder was certain she was in the right degree because she loved school. However, she began to feel uneasy as she prepared her medical school applications the summer before her senior year. She sensed reluctance in her spirit—something deeper than the typical anxiety that students experience as graduation approaches. Since she knew she loved biology, she wondered if she simply wasn’t searching for the right programs. She decided to look at options for a post-graduation gap year to help her determine her next steps.

Her search led her to World Race, a mission trip where young Christians travel to 11 countries in 11 months to serve and grow in their faith. During this season, Burkholder discovered what she believes the Lord placed on her heart to do with her health sciences degree—and reflected on how Taylor played a significant role in her journey.

“My goal in life is to go work in vulnerable populations around the world,” Burkholder said. “My heart is really with refugees—a passion I got from Taylor through Lighthouse—and working in refugee camps to combat preventable infectious disease.”

Taylor’s Lighthouse trips span the month of January (J-Term) and are service-oriented opportunities for students to engage in excellent short-term missions. Students study the cultural, historical, social and religious aspects of a host country and are equipped to carry out ministry among the local people.

When Burkholder was a sophomore, she was one of the first students to go on the Lighthouse trip to the island of Lesvos, Greece, to serve refugees. Her group expected to primarily focus on refugee children, so they packed plenty of games, crafts and vacation Bible school activities so parents could rest and take care of themselves.

However, upon arriving at the refugee camp, they learned a snowstorm had recently hit the island for the first time in decades. Areas of the camp were flooding and many tents were caving in from the accumulation of snow. Their plans to play games and do crafts were immediately set aside for disaster relief—the students found themselves passing out blankets and food while watching over the more vulnerable families of the camp.

At the beginning of the trip, Burkholder was placed outside of a gate separating families of mostly women and children from the rest of the camp. For four nights from midnight to 8 am, she and another student sat in the rain and snow to keep watch in case they were needed. It was this experience among many others that J-term that opened her eyes to concepts she would later take with her into her work in the health sciences.

Burkholder said. “Getting to experience people and see them for who they truly are, rather than just a refugee or just an immigrant, made me think, ‘You're a person just like me. You're actually smarter and more well-endowed in your society back in Syria than I am in America—why do I get the privilege of going to a private Christian university, while you as a lawyer now have to sit in this slumlike camp?’” Burkholder said.

Burkholder continued to process and wrestle with these questions both with her friends and mentors at Taylor, and later, while traveling with World Race after graduation.

She said all that she learned and witnessed during her travels—both good and bad—has enriched and refined her spiritual development.

“Taylor showed me my faith doesn't have to be what I've always been told it is,” Burkholder said. “I'm allowed to question, I'm allowed to talk to God like, ‘Hey, I don't understand this—maybe the church has always told me this or family's always told me this, but for some reason it's not clicking. Who are You and how can I experience You in a new way?’ I think that questioning ability definitely came from Taylor, and it has carried through even today.”

Now, as she works as a graduate assistant for the public health program at Saint Louis University, she feels this period of reflection, cross-cultural experience and Christ-centered service has prepared her for her next steps in her career in preventative care. She wasn’t sure if transitioning from biology to public health would feel like a natural fit, but the foundation she received at Taylor proved to be a valuable asset in her new path.

Lessons from the Great Physician

Before attending Saint Louis University, Burkholder was personally affected by the pandemic when it caused her mission with World Race to end prematurely. She found herself back in the States in March 2020 and moved back home to determine her next steps.

In this time of uncertainty, Burkholder said the Lord stepped in with unexpected blessings. A series of perfectly aligned circumstances took Burkholder from no concrete future plans to pursuing her masters’ and working as a graduate assistant over the span of three weeks. She is truly grateful for the Lord’s provision and seeks to honor him in her new roles.

“How I'm currently living my life, based on how I've seen faith interactions at Taylor and the World Race, is to be filled with His joy each and every day,” Burkholder said. “I never know who I'm going to meet—I don't know if they’ll be a fellow Christian or someone who despises all religion or thinks it's stupid. And so instead of carrying this mindset of, ‘Let me bring the Lord to you,’ I can just carry His presence and be joyful, loving and a safe place. The Lord's everywhere; I can just strive to show more of what He's like.”

She looks forward to using her gifts in the health sciences to be the hands and feet of Christ all over the world.

Interested in learning more about serving the vulnerable through the health sciences? See a list of our majors here.