Tag with a Twist: a Taylor Tradition 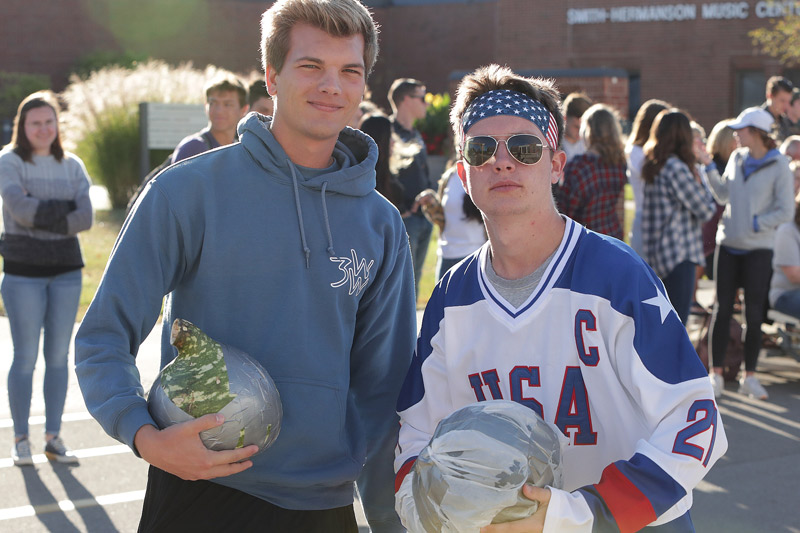 Taylor University’s history is filled with a variety of traditions such as Silent Night, pick-a-dates, Airband, and a unique game of tag. Called Melon and Gourd, this week-long tradition of tag with a twist started in 1994, and we celebrated it’s 25th anniversary this October.

What is Melon and Gourd?

During Melon and Gourd week, the men living on Third West Wengatz (3WW) run and hide from the two taggers who have to carry the fruit and vegetable around campus. Tagging can only occur outside, and as soon as a runner grabs a door handle, they’re safe!

On the first week of October, students gather at the entrance of Wengatz Hall on Sunday night at 11:55 pm to countdown the kick-off of the classic Taylor tradition. When the clock strikes midnight, the men have to run across campus and touch the Samuel Morris statues and make it back to Wengatz without getting tagged by the two guys carrying the melon and gourd who are released shortly after them.

The week consists of 3WW runners asking their friends to carry their backpacks for a quick escape plan, spending as much time indoors as possible, and keeping their running shoes on at all times because the taggers may be around any corner, ready to hand off the melon or gourd.

At the end of the week, the runners have to make it to 10 am chapel on Friday without getting tagged. The runners like to make a big scene of getting to chapel by dressing up, faking deaths, making distractions, or anything creative to keep them from getting tagged. By the time chapel starts, the two guys left with the melon and gourd are punished by having to eat parts of them at their Oktoberfest pick-a-date with the girl that they take. This part of the tradition is dreaded, hilarious, and has lasted for over 15 years.

Taylor University alum, Jeff Brooke ‘06, had much to say about Melon and Gourd week during his tenure at Taylor. “Melon and Gourd week was the highlight of the year, it brought people together and was exciting to be apart of,” explained Brooke. As the tradition has been  long-standing, it has changed slightly here and there.

Brooke shares that 15 years ago, the game started on Sunday with a wing meeting in the Third West Wengatz lounge. The PAs, who started as the taggers, explained the game to the guys living on the floor and notified them at that moment they would be at risk when they stepped foot outside. There was no countdown or statue run to start the week off like there is now.

What was difficult back then was there was no Twitter feed or group chats to track who had the melon or gourd when. Getting to chapel on Friday looked similar to the event today. The student body would be hovering throughout the student center for a spectacular show. As long as the runners made it through the front doors of the chapel, they were safe, but that looked different in some of the eyes of the 3WW guys.

Jeff Brooke remembers the intensity of getting to the chapel on the final day. During his time at Taylor, one guy shaved his head bald so that the taggers would not recognize him! Others made a scene, like a friend who was carried to chapel on top of a mattress as he read children’s stories to the spectators.

The guys living on this specific floor take a lot of pride being involved in the activity. Grant Bork '23, says of his first year doing Melon and Gourd, “this tradition influenced my experience at Taylor in many ways. It’s brought me closer to the guys on my wing and it has built bonds and memories that I will cherish forever.”

The impact of this wacky tradition lasts longer than a week. Bork lightheartedly explains the funny impact the game has had on him a month later, saying, “at random times throughout the day I now will glance over my shoulder to make sure that I’m not being stalked. Freely stepping outside is something I will never take for granted again.” The tradition is a hot topic on campus months after it has happened.

Melon and Gourd week will always gather a crowd on campus. The student body is highly invested in the game, even if they are not playing. The game is like Taylor University’s own reality TV game show. People take interest in the week and get updates from their friends, as well as social media that posts game highlights and news about who has been tagged. When Melon and Gourd concludes, our community starts scheming up fun for the next tradition (and next year's tag game!)