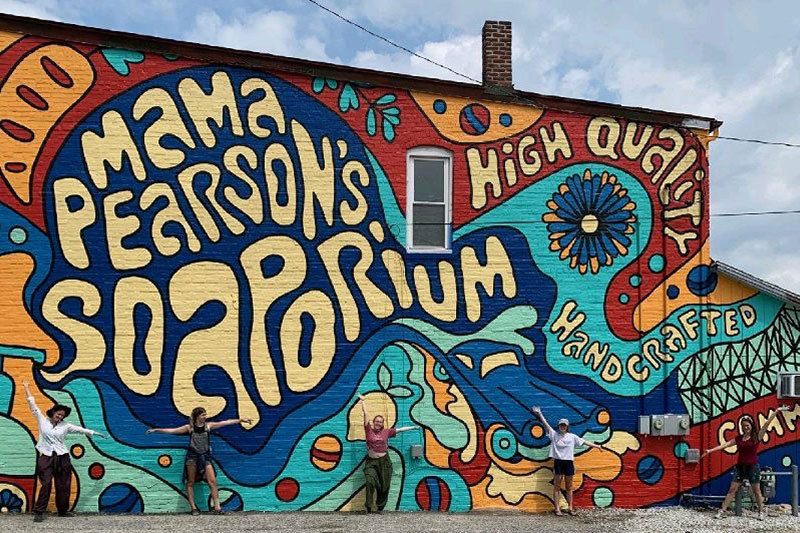 At Taylor University, students in the Art Department are encouraged to not only study their craft, but to use their talents to change the world around them. That’s why a group of students brightened up the nearby town of Gas City with a colorful mural on the side of a local business.

Every year, Professor Laura Stevenson pushes students in her Painting II class to reach outside their comfort zones. The class works on different projects, trying various types of paint and exploring what styles work for them. However, she also tries to take painting off the canvas and outside of the classroom.

Over the past few years, Stevenson has been cultivating a relationship with the Gas City Beautification Committee to partner with the town to create a mural. In January 2020, a local business stepped forward and expressed its interest in hiring Taylor students to paint a mural along the side of its building. This business was Mama Pearson’s Soaporium, a store selling soap, lotion, and other skincare products.

“The Pearsons are an amazing couple with a love for people and the community,” Stevenson said. “They also have really great products, and some of the soaps Amie makes are artworks in and of themselves!”

With a partnership established, the Painting II class was structured to not only accommodate the usual lessons, but also to work with a real customer.

In order to understand what the owners had in mind, the Painting II class visited the store to plan out the mural. The Pearsons wanted something that pointed to the products their business sold while also representing the history of their community. Each student spent time talking to the Pearsons and exploring their store, then created their own design for the mural.

“During the process of generating ideas, I remember having a lot of fun coming up with ideas and I remember even looking up music and similar artists that I wanted to pull inspiration from,” said Abby Braswell, a Graphic Arts major. “That was a lot of fun and I got to learn a lot about the artists I was pulling inspiration from.”

Braswell spent time researching the history of Gas City and thinking about what could represent Mama Pearson’s Soaporium, and she also drew inspiration from other classes.

“I took a History of Graphic Arts class, which went through the 1800s to present day, and that's where I learned about the different graphic styles throughout the times,” Braswell said. “I really enjoyed that class and was able to kind of pull from that, like, ‘this was a successful design style in the 80s—let's see if I can kind of draw from that.’”

When each student had created their design, the Pearsons went through them and chose the one they felt best fit their business. Braswell’s was chosen, and the group began to refine it into something they could all agree on. They spent time in class discussing what could be improved or changed to best fit with the Pearsons’ goals. Though the semester was cut short, the class still ended with a finished design that was ready to be turned into a reality.

Despite COVID-19 complications, four of the students from the Painting II class were able to return over the summer to complete the mural. Within two weeks, they transformed the plain white brick along the side of Mama Pearson’s Soaporium into a colorful series of swirls and bubbles.

None of the students had ever painted a mural before, so climbing on scaffolding and working in the summer heat were new challenges to the group. Even transferring the design was a new experience, as they had to project the design onto the wall in order to trace the outline. But support from the community encouraged the students to push through until the end.

Looking Toward the Future

After the project’s completion, the community’s responses remained overwhelmingly positive.

“The Pearsons have had many people interested in the mural, and they told us that multiple people have asked them if there could be a t-shirt designed after it,” Stevenson said. “So they have commissioned one of the students from the team to create a t-shirt design.”

Students have also taken what they learned from the mural to use in other projects. Sarah Brennan, one of the painters involved, has been commissioned to work on her own mural project in Fort Wayne, IN. Others have drawn from their experiences in working with a team to tackle large-scale projects, seek freelance work, and apply for jobs.