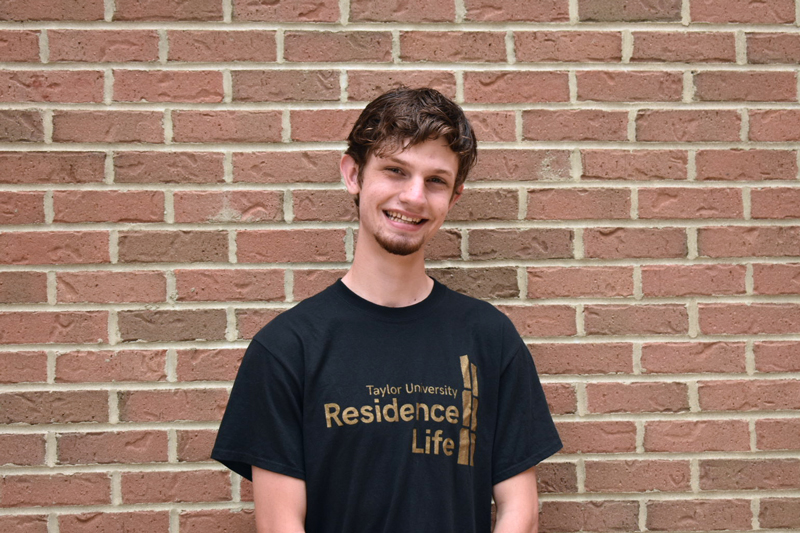 At Taylor, Computer Science majors learn to solve problems in all areas of life. Cybersecurity majors learn the skills necessary to protect those around them, and Digital Media majors are given the ability to combine computer science with creative and artistic abilities. Students can add Systems to any degree as well, which is a special program teaching students to think critically about the way the world works.

For senior Tim Swanson, these, in combination with Taylor’s liberal arts core curriculum, led him to develop his own software startup as a student.

Swanson moved between several majors as a freshman, finally landing on Computer Science–Digital Media with Systems. But after realizing that his goals went beyond the curriculum guide course material, he began manually sifting through degree documents and doing his own academic planning. While coding a simple algorithm to help him with one part of his spreadsheet, he realized the difference it made and the shortcomings of the current tools for anyone with an academic anomaly.

While working on Taylor’s Computer Science & Engineering Department site, he was tasked with making hypothetical four-year plans for prospective students. He ran into difficulties, and it became clear in Swanson’s mind that he had to do something to fix it.

He spent all of his sophomore January term working on coding the tool, taking what he knew to make a well-coded prototype that was user-friendly from a design standpoint. It was then that Envisage, his degree planning software, was born. After showing it to professors, the word entrepreneurship came up. Adjunct Professor of Computer Science Josh Hibschman and other professors put him in touch with people experienced in technical entrepreneurship as Sawnson had no background in business.

Hibschman became a personal mentor to Swanson, offering professional and coding skills whenever needed. He seeks to help students develop startup ideas they have and to help them network with career professionals in order to find jobs right out of Taylor.

“Students come to me with all sorts of ideas,” Hibschman said. “Three or four of (these ideas) a year are things that have a minimum of $10 million dollar potential, and I really encourage them to go after it. Tim (had) the first of those ideas in my time at Taylor.”

Swanson took a Redemptive Entrepreneurship class to learn more about what he could do with Envisage. He learned that entrepreneurship can be a positive tool in God’s Kingdom rather than just a money-making machine. Students in the class work on a major project for the whole semester, and Swanson worked on a pitch for Envisage.

With that pitch, Swanson ended up winning Shark Tank, Taylor’s yearly entrepreneurial contest. He realized his idea had the potential for success, and Swanson has considered each small milestone an affirmation to continue.

“As long as I have that validation, I will continue to pour my heart, body and soul into this because it's hard, and I only want to continue for as long as God has called me to,” Swanson said.

The Beauty of Collaboration

Shark Tank connected him with other entrepreneurial experts and mentors including Jamie Haenggi, chief customer officer of ADT Security. Over Christmas break, Haenggi helped Swanson create a year-long business plan. Together, they set the launch date for Envisage for August of 2021.

Computer Science students have the opportunity to do advanced projects, where they work on real projects for credit. Swanson gathered a group of students to help him prepare the rest of the programming needed. Other than periodic advising from professors, the project was entirely student-led.

“It's been cool to sit back and watch what they build,” said Hibschman.

Swanson, along with Liz Yieter, spent their J-Term working on wireframing; they took what he had from the prototype, sketched out the web app they wanted, and then started developing it again from scratch. Yieter particularly helped develop an interactive, human-centric design process.

He then received a generous gift from an anonymous donor who believed in Envisage and the students’ work on it and wanted to remove the financial barrier they were facing to continue development. With that funding, Swanson was able to hire two students and have a gradual onboarding process. With everything set up in advance, they could prepare in the time leading up to the summer and have a coding marathon after the semester ended.

While Swanson built the interface from the front end, coworkers Connor White built the back end, and David Chalifoux built the architecture. Together, their job was to build a ready-to-launch-web application from scratch in just three months.

“Each person had their spots to cover, but the great thing about small teams is that there's a very low communication overhead,” Swanson said. “Adding a feature consists of poking your head over your monitor and just talking to them (and) having a couple minute conversation. It’s beautiful.”

At the end of the summer, Envisage successfully launched their beta version and is now live for any student with a Taylor email address.

Helping students create good four-year plans is a need at almost every university, so the team has been structuring Envisage as a tool that any university can use. Some larger universities have just developed in-house tools, but smaller schools like Taylor have a harder time developing good solutions. Swanson hopes that soon a student from any school could enter their information to make a personalized plan.

In the spring of 2021, he met with Taylor’s senior leaders where he pitched what Envisage could do for this college. He's also been working to push Envisage at the student level, working to get in advising sessions and meeting with individuals to help them with their plan while also learning about how to make Envisage better.

“One thing that needs to happen this semester is for people to decide that they like it,” Swanson said. “If adoption takes place, I will think more seriously about getting larger amounts of investments, and I will continue to work on Envisage after college.”

For Swanson, being at Taylor made Envisage possible. The quality of education and the Foundations of Christian Thought class had a particular impact on him. Those experiences shaped his theology, faith, and what he does academically and professionally, and gave him the stamina to continue with Envisage.

“The ability to discover my own identity, find a family in my first week at Taylor, and to have all of my other needs met by being in such a healthy community made me a healthier person,” Swanson said. “I was then able to have the spiritual, mental, emotional, and cognitive resources to put into something as big as Envisage. I would never have created a startup and put this much energy into it if I was not able to integrate it with my spiritual energy and convictions.”

Swanson’s experience in Residence Life has also impacted the way he approaches personal projects. As a junior, he was a Personnel Assistant (like an RA) on his floor. The leadership and problem-solving skills necessary for helping 30 men during the Covid-19 pandemic was a trial by fire, but set him up well to lead the Envisage team.

Swanson encourages high school students to investigate all of their interests. In high school, he couldn’t see how making cinematic video game videos, coding, and interacting with diverse people could combine. At Taylor though, he was able to use his people skills to find out what others needed, code everything, use his film experience to make tutorials for Envisage, and build relationships with professors.

“Being a student was a really safe time to do something like a startup. If it fails, I still learned a lot from the process and that was what this education was for. It’s been a really beautiful way in which education has done its job equipping me well.”

Hibschman encourages future college students to not limit themselves to the first field they come in contact with, and to make use of the resources and support professors can offer.

“If your courses aren’t what you expected them to be, find a project to get hands-on experience with to learn. Billion-dollar companies like Facebook got started by college students,” said Hibschman. “I can see the magic with some of the students when they come in, they just have the energy. It's really fun to watch and encourage them so they can keep going.”

Taylor’s Computer Science & Engineering Department equips students to use their skills to better the world. Schedule your campus visit today to see it in action for yourself.