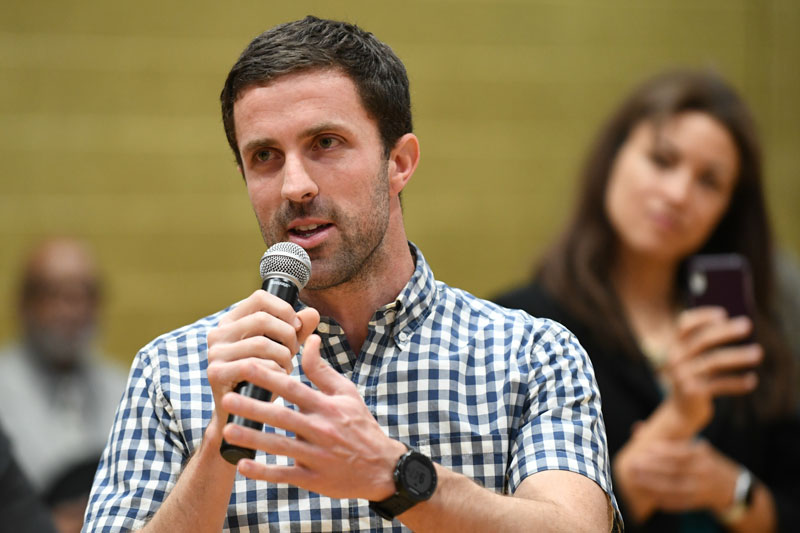 At Taylor University, Mathematics majors develop practical problem-solving skills that can be applied in a variety of fields and career paths. They explore mathematics from both analytical and aesthetic perspectives, learning to appreciate its beauty as well as its complexity.

This year, Kirsch won a prestigious national education award, an honor he received for the 2019-20 school year.

Surprised with a Prize

On January 8, 2020, Nate Kirsch picked up his classroom phone to answer a call. The assistant principal was on the line, asking him if he was coming to the gym for a school assembly.

Another pep rally? We just had one last week, he thought. We’re using up class time, what are we doing?

Kirsch confirmed he was on his way and begrudgingly left his classroom.

As he took a seat in the gym, he looked around at the scene unfolding before him. The band was playing, the bleachers were packed, and cheerleaders chanted, shaking pom-poms. Then, Tennessee Education Commissioner Penny Schwinn stepped forward to speak, and Kirsch figured the pep rally was meant to welcome her.

But Schwinn said she wasn’t the reason they were gathered there that day.

Schwinn gave a brief message, and another woman announced they came to Whitehaven to honor a teacher with an award and money. This woman was the Milken Educator Awards senior vice president, Dr. Jane Foley.

Kirsch’s mind started spinning. He made a mental checklist of other teachers who he thought would be worthy recipients, then wondered—could it be him? His suspicions were confirmed when his name was called. The gym erupted with applause and cheering as a giant check for $25,000 was brought out onto the gym court.

“The students went crazy, it felt like an Usher concert,” Kirsch said. “Everybody’s screaming, looking at me, all these cameras are in my face, it was overwhelming.”

That day, Kirsch became the first teacher in Tennessee to receive a Milken Educator Award, known in education circles as the "Oscar Award of teaching.”

That night, he spent over three hours reading and responding to texts and emails congratulating him with two words: thank you.

During his time at Taylor, Kirsch steered his efforts away from becoming a teacher. He switched his major from Mathematics Education to Mathematics with a Physics minor because he couldn’t envision himself waking up early to teach. He laughs at this irony in hindsight.

As his classes at Taylor grew more advanced, his appreciation for math increased exponentially. He enjoyed discovering connections in his work and seeing how everything fit together to form a larger picture. His professors at Taylor played a significant role in his story, as they introduced him to the idea that math could be beautiful, elegant, and bring him closer to the infinite God who brings order from chaos.

“Taylor fostered a love for math for me. It pushed and challenged me far beyond the level I had been pushed in high school,” Kirsch said. “The math department is rigorous but also supportive, so I felt challenged yet also equipped to take on anything.”

Originally, Kirsch thought he might want to use his skills in a missions context. After graduation, he spent six months with Youth With A Mission and thought he wanted to pursue clean water ministry, but it didn’t feel like the right fit.

Kirsch went home and got a desk job at a consulting firm as an actuary. Soon he realized the thing he looked most forward to in his life at this time was volunteering at his church’s high school youth group.

One evening, he called one of his best friends at Taylor who was teaching math at the time. Kirsch was curious about what teaching math could look like for him. His friend encouraged him to consider the Memphis Teacher Residency (MTR) program.

MTR seeks to help close the education gap by training excellent teachers equipped for under-resourced communities. The organization believes that educational inequality is one of the greatest social justice and civil rights issues in America today and they seek to combat this because of their Christian values.

Kirsch himself grew up in a successful high school. When he learned that schools in economically disadvantaged neighborhoods struggle to get scores that meet the ACT and SAT college readiness benchmarks, he was frustrated at this injustice.

“That always tugged on my heart—I thought it wasn’t fair that someone could be born in a ZIP code that could statistically predict their ACT score,” Kirsch said. “If they were born five minutes down the road, statistically their act scores could have been five points higher.”

The more Kirsch’s friend told him about the MTR program and transitioning to teaching math, the more excited he became. He thought it was a perfect blend of missions, math, and helping high school kids.

As soon as he hung up the phone, he told his mother he wanted to move to Memphis. He said he instantly knew this was what all the little pieces of his story had been leading up to.

“Being able to use the talents and passions I have to be a small piece of solving a major issue in our country was pretty exciting to me,” Kirsch said. “If I have a purpose I can get up and do just about anything. I can do something that’s hard if I think it matters.”

Kirsch was accepted into MTR’s competitive program, where he received continued education, valuable mentorship, and a master’s degree in Urban Education. His four years at MTR launched him headfirst into the career he has today.

Seeking the Positive through the Negatives

Kirsch’s week as a teacher is incredibly packed. He spends his days teaching and attending faculty meetings, some afternoons tutoring, his evenings coaching track and cross country, and his Saturdays are often spent at track meets. Despite his busy schedule, he said the hardest part of his job isn’t necessarily the long hours—it’s seeing his students go through difficult times. Coaching has been one of Kirsch’s biggest passions and spending thousands of hours with his kids has resulted in close-knit bonds.

“When you really care for your kids, it’s hard to see them go through hard things,” Kirsch said. “The best part is also the worst part—you fall in love with these kids and form these strong bonds, but that makes it hurt more when you see them dealing with all the challenges that come their way. You can’t be a good teacher if you’re not in the trenches, and if you're in the trenches you’re going to get hit with some shrapnel. But you'll also build deep relationships.”

Some of these trenches have included members of his team getting injured, disappointment when a student doesn’t pass an exam, or students not being able to secure transportation to school. The COVID-19 pandemic also canceled a national track meet in Florida that his team had looked forward to all semester. Currently, Whitehaven is doing online learning.

When Kirsch gets discouraged or exhausted while running the race of his faith, he relies on the Lord to help him cross the finish line.

“I’m reminded in those moments that these kids are created in the image of God and they deserve the best of me just as Christ gave all of himself to me,” Kirsch said. “As image-bearers of God, they deserve to be loved, seen, valued, challenged, pushed and listened to… My faith also gives me perspective and helps me realize what’s important, and then I can pursue excellence without feeling like I'll be defined by the results.”

Ultimately, Kirsch adores his job and said it combines all of his passions.

Kirsch said the contagious enthusiasm of Taylor’s math professors carried over into his own teaching style. He recalls his first year teaching AP calculus when a student asked him, “Coach, why are you smiling?”

Kirsch responded, “Because what we're doing today is so awesome. You're going to love it, I can't wait to share it with you.”

Kirsch loves to see when his excitement gets kids’ attention and believes that to be a good teacher, you need to love what you teach.

“When I’m teaching, I can authentically tell kids, ‘what we are learning today is really cool,’ and it doesn’t have to be a lie,” Kirsch said. “I don't have to trick them into thinking I like this stuff. I genuinely do.”

His Role in the Equation

Kirsch may be a national award-winning math teacher, but he considers his students to be the extraordinary ones.

He feels disappointed when people find out he teaches math in the inner city and the first questions he gets asked are about violent behavior or fatherlessness. He doesn’t want anyone to have a negative view of their community and describes his students as more respectful and more hardworking than he ever was when he was in high school.

“They care about their education and they are just incredible humans who have unlimited potential if Christians would be motivated to come and to teach them,” Kirsch said. “They would love to learn and would love to be prepared to change the world and their communities. There are so many dynamic leaders here in Memphis and it's a privilege to be their teacher.”

Kirsch joked that he doesn’t identify himself as a good teacher, but he identifies himself as someone who believes in kids and wants to give them opportunities to show how smart they are. He said these kids are often underestimated because of what they look like or where they come from; he raises the bar and they soar over it.

When reflecting on winning the Milken Educator’s Award, he admits he struggles with imposter’s syndrome. He considers himself a “normal guy” who shows up to work each day and does his best.

“These are kids with a ton of grit and talent and brilliance that can do anything if someone comes in to challenge them,” he said. “That's all I've done, is see them for who they are—that's what makes it look like I’ve done something amazing. It's them, they're the ones who make me look good.”

For more information about how Taylor’s math department equips students with the skills to change lives, learn more here.