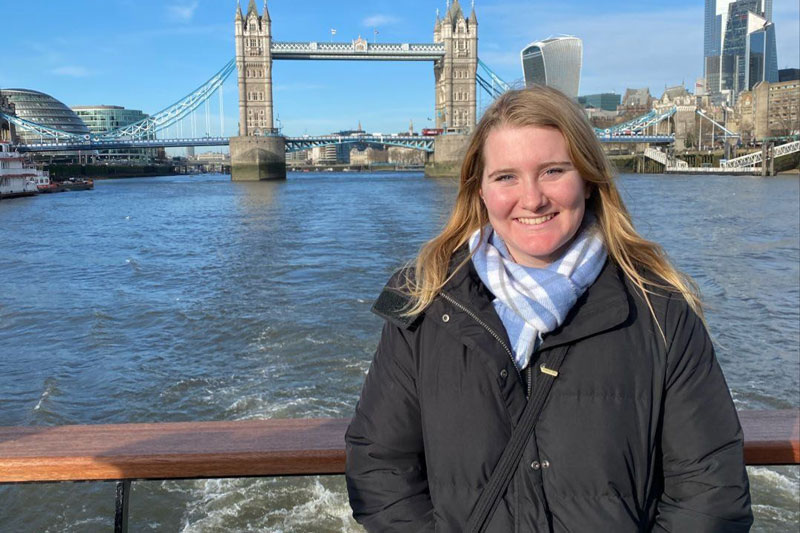 Taylor’s Math department equips students with the skills they need to thrive in the real world. From hands-on, collaborative work inside the classroom to preparations for practicums, students are challenged and given the space to grow they need.

For Jessica Doctor, a recent Mathematics—Interdisciplinary major and Finance minor graduate, those experiences were immeasurably helpful as she began applying for internships and post-graduation jobs, ensuring that she was prepared for whatever came her way.

Doctor has always loved math and grew that passion while at Taylor. While she planned to study data analysis, she found herself drawn to the business and finance elements of math. This led her to an internship as a Business Analyst at United Health Care, where she developed contracts and assessed risk management as well as data analysis.

“The Math department is really great because it does put you in a lot of teams early on… you get that experience of learning to work with all kinds of different people,” Doctor said. “Those are the people you’re going to be working with in real life.”

Throughout her last semester, she continued to intern remotely and plans to work full-time for United Healthcare in the Rotational Graduate Cohort program starting in August.

Inspired by her own experiences applying for an internship, Doctor worked with one of her professors to host a panel for all math majors and minors. The panel discussed applying for internships, preparing for interviews, and working remotely.

Taylor math students are required to conduct a semester-long research project on a topic of their choice. Doctor combined her work with her internship with her research project, focusing on the use of the Black Scholes equation in healthcare, a mathematical formula used for option pricing.

Doctor expressed great gratitude for the way that faith was integrated into the classroom, both in her math classes and in Taylor’s core curriculum. Her professors gave assignments about the relationship between probability and chance and God, as well as a Christian perspective on finance.

“Mathematicians would take the most beautiful approach to how the math works,” Doctor said. “Emphasizing symmetry and all of these other things they deemed beautiful and perfect. And often, I’d feel like in real life, the beautiful stuff doesn’t always work, like it’s not always the thing that’s right. In math, it seems to be, more often than not, in the way these mathematicians research, the beautiful way was the correct way. Just seeing how much symmetry and all of this stuff that exists in our universe? It so highlights an intelligent creator.”

Doctor’s favorite math course was Mathematics of Finance because it allowed her to see the way that math is used in the stock market and housing loans.

“The real world is so mathematical,” Doctor said. “There’s just so much that goes on in the every day and behind the scenes that you don’t even think about.”

Grading assignments for a foundational math course has been one of Doctor’s favorite things. She emphasized the community that she has found within the math department, and the ability to work with other students as well as see growth in individuals.

“It’s really fun seeing the growth of these people… really growing their critical thinking skills, growing in their math, growing in who they are,” Doctor said. “And even getting to know these students through their work and through talking with them, and through working on them with problems and seeing them struggle… and seeing them have almost like a light-bulb moment, that’s probably been one of my favorite things.”