Life in the Dome: Stories from Covid-19 Isolation 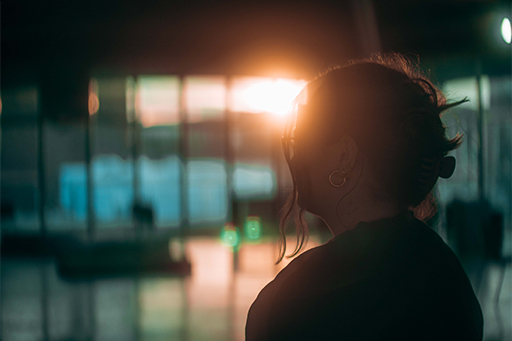 *photo above courtesy of Tim Hudson

Junior Grant Patterson was on his way back to his residence hall after dinner when his phone pinged an email alert. Two days earlier, he had participated in a voluntary coronavirus mass-testing program for students. His test result was positive.

The email instructed Patterson, a Professional Writing major, to pack belongings for 10 days and head to the Dome, an iconic building that has been repurposed as an isolation space for Covid-19-positive students. Because of the late hour, a campus police officer was there to let him into the building.

“When I walked in, I could see that all the extra beds were sitting straight up against the wall, apparently because some guy had gotten bored,” Patterson remembers “They said, ‘Oh, here comes a new one! Here, just pick out a bed and we’ll get it down for you.’ It was all very welcoming.”

Coping with Covid-19 on Campus

From the first day students began to return to in-person classes in August 2020, Taylor leaders knew the coronavirus would be close behind. Adjustments were being made to every part of campus to mitigate the spread, from changes in food service areas, installing plexiglass shields, seating capacity reductions, and classroom adjustments, just to name a few. For Residence Life staff, one of the biggest challenges was to create spaces and policies for students in quarantine (Covid-19 exposure) and isolation (Covid-19-positive).

Four locations were identified as isolation spaces: a former health center that provided individual rooms and bathrooms, two houses owned by Taylor near campus, and the Dome, a large, architecturally unique building built in the 1950s. Although it had previously served as Taylor’s cafeteria, student union, and bookstore, it was standing empty as the search for space continued. Seizing their opportunity over the summer, Taylor staff moved in basic furniture and added showers and bathrooms to set up separate living spaces for men and women.

For Kathy Chamberlain, director of the Counseling Center, and Lori Heath, Assistant for Campus Ministries, the concern was for students’ mental wellbeing during isolation. Knowing how negatively isolation can impact mental health, Chamberlain created some resources for students to use during isolation to help mitigate the negative feelings that could arise.

At the beginning of the fall semester, Chamberlain worked to call every student in isolation every day. As time went on and the number of cases grew, that became difficult to maintain. Even so, “those calls gave me a lot of good data that the mental health impact in the first 3-5 days was more than we’d hoped it would be,” Chamberlain said.

Chamberlain adapted again when she realized the sick students weren’t checking their emails. That’s where she had been sending mental health guidance, so she had posters made to put up throughout the Dome so students could be reminded of the tools and strategies to care for their mental health.

As with every other aspect of adapting our lives to the pandemic, Taylor’s isolation spaces evolved over time—posters going up was just the beginning. Jesse Brown, Dean of Students, began conducting post-isolation interviews with students to ask how Taylor could improve conditions in isolation.

“Anytime someone recommends something, we try to make it happen,” said Brown. From bringing in extra tables so all the students could eat meals together to setting out a guest book for each person to sign, student suggestions helped improve the spaces. The more extensive projects to make the space more comfortable were started after Thanksgiving when all students left campus for the extended holiday break.

Community Even in Isolation

Inside the Dome, Taylor’s culture of community still found its way in, even with the group of students constantly changing as students whose isolation periods ended could return to the general population.

When they felt well enough—or, as in Patterson’s case, were asymptomatic—they watched movies together, ate meals side by side, and played card games or four square. With no masks needed, students relished the chance to have some semblance of normalcy, having deep conversations face to face with people they may not have had a chance to meet otherwise.

“Being in the dome felt like Taylor again because there was such an aspect of intentional community, said Graley Walter, a sophomore Elementary Education major. “There was constant time for deep conversations, and we all knew we had to keep each other sane so we had a sense of normalcy in giving each day a routine.”

Patterson had plenty of energy to dive into class projects for his January term classes and his on-campus job, which allowed him to work remotely. He set up a work area in a well-lit corner of the Dome.

“I was actually able to be more productive than usual,” he said. “I did miss being in class and being apart from my friends, but it did give me some more time to get my projects done.”

Across all of Taylor’s academic disciplines, professors and academic support staff went the extra mile to help students in isolation and quarantine.

On Sunday during Patterson’s and Walter’s quarantine, an impromptu church service was conducted. One of the students had brought a large monitor into isolation, and another had a pair of speakers. With a laptop connecting to the screen that streamed a local church service, the students were able to gather together for worship and prayer.

“Our students are choosing to lean into God,” said Chamberlain. “They are finding ways to be resilient, even in such challenging circumstances.”

For Walter, isolation gave her opportunities for reflection and renewal. “I really really think that going into isolation was something that I needed, and that’s how I saw God,” she said. “Everyday is usually ‘go, go, go’ so finally you have time to breathe and focus on your relationship with yourself and with the Lord.”

Even if asymptomatic, dealing with the coronavirus is never fun. Besides the physical toll of sickness, the mandated isolation period is extremely disruptive, and to spend that time in a strange place away from the comforts of home adds an additional stress to students’ lives. “It was hard, it was challenging, and there were a lot of tears. We just really tried our best to make the most of it,” said Walter.

They weren’t alone in making the most of it, either. One of the bright points for students living in isolation spaces was the housekeeping staff who voluntarily served in those places. Several of them had already had the virus, and they willingly entered the places where sick students were living. Besides keeping the locations clean, housekeeping staff also served as a listening ear for students and a conduit for helping to meet practical needs.

“They’re straight up heroes,” said Patterson. “We desperately loved them. They genuinely cared about stuff that was going on.”

Student support came from all across the university, too. Students had access to telehealth services as they managed their symptoms, as well as residence life staff checking in. Friends bring snacks and puzzles, leaving them by the door for no-contact delivery. Extra WiFi receivers were brought in to improve connectivity. During a few days when there was just one student in isolation, her residence hall director brought her coffee regularly.

Early on, Chamberlain and Heath also asked Taylor’s Parents Council to consider helping with some morale-lifting treats. The Parents Council responded by raising funds to provide pizza to anyone in isolation on Fridays, as well as sending care packages and notes to the students.

The message? You’re not alone, even in isolation.

“Our students are trying to make the best of it, persisting and persevering,” said Brown. “Faculty continue to make accommodations and be creative in making classes accessible to everyone. The Dining Commons staff are learning to be flexible. Everyone has made adjustments.”

“That’s Taylor: people genuinely trying to care for themselves and for other people.”