Lessons from the Faith of Theodore Roosevelt, on the Centennial of His Death 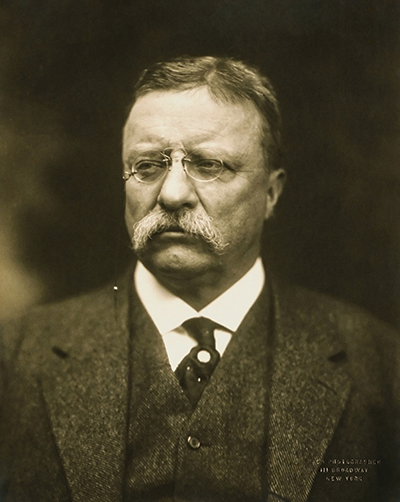 Early in the morning of January 6, 1919, former president Theodore Roosevelt died in his sleep at his home on Oyster Bay, Long Island. “Death had to take Roosevelt sleeping,” remarked Woodrow Wilson’s Vice President, Thomas R. Marshall, “for if he had been awake there would have been a fight.”

One hundred years after Theodore Roosevelt’s death, his shadow still looms large in American culture—literally at Mount Rushmore, where his visage can be seen miles away. Figuratively, he looms because Roosevelt serves as a touchstone for liberals and conservatives, militarists and environmentalists, big game hunters and those who admire his refusal to shoot a certain “teddy” bear in Louisiana.

Lost in all the material about Roosevelt, however, has been the place of his Christian faith. While Roosevelt’s faith was not that of contemporary evangelical Protestantism, it was nevertheless real. Indeed, despite a lack of evangelical bona fides, Roosevelt’s lifelong engagement with Christianity has lessons to teach believers today.

Roosevelt was born October 27, 1858, to a wealthy family in Manhattan. His parents were members of various Presbyterian and Dutch Reformed congregations. Emulating his father’s work with the indigent in New York City, the teenaged Teedie (as he was affectionately known) taught a “mission” Sunday School class for underprivileged children until he left for Harvard in the fall of 1876.

Harvard proved to be the pinnacle of Roosevelt’s pious, doctrinally-grounded faith. Although he was hundreds of miles from home, he nevertheless continued his Sunday School teaching at Christ Episcopal Church in Cambridge (until he was discovered to be a Presbyterian and subsequently dismissed). His diary entries from his college days reveal a young man taking in Harvard social life but also attempting to maintain a relationship with the Lord. The depth of Roosevelt’s faith became especially evident after his father, Theodore Sr., died of bowel cancer in 1878. Devastated, the young Roosevelt read passages of Scripture, copied a hymn in his diary, and confessed “nothing but my faith in the Lord Jesus Christ could have carried me through this, my terrible time of trial and sorrow.” While this testimony was significant, it would also prove rare: almost never in later life did TR mention Jesus Christ directly.

This absence certainly had something to do with the crushing tragedy Roosevelt suffered in 1884. The 25-year old Roosevelt received a cable in Albany, New York, stating that his wife was in poor health after delivering their first child. Panic-stricken, Roosevelt boarded the first train to Manhattan only to find his wife and his mother dying in the same house. While his infant daughter Alice survived, his wife and mother perished within a few hours of each other. Filled with grief, Roosevelt traveled to ranches he had purchased in the Dakota Territory.

After 1884, Roosevelt’s religious life is harder to track. His diary entries became much less revealing after his tragedy and then stopped altogether by 1887. His subsequent rise through political, administrative, and military channels left little time for reflection on his interior religious life.

All this, then, leads to at least two lessons 21st century Christians might learn from Theodore Roosevelt. Positively, believers can be inspired by Roosevelt’s stress on righteousness and morality. This emphasis, of course, is well in keeping with the biblical injunctions to live in a way that honors God. However, there is little in Roosevelt suggestive of grace, mercy, or redemption. “I am mighty weak in the Lutheran and Calvinistic doctrine of salvation by faith,” he once confessed, “[but] I do believe in the gospel of works as put down in the Epistle of James.” Roosevelt excelled at preaching law, but observers can wonder if there was any need for grace in his moral economy.

More negatively, evangelicals would quarrel with the breadth of Roosevelt’s ecumenism. It is one thing to treat all people with respect and dignity, and another to assert that their beliefs are irrelevant to their eternal destinies. Precisely because Roosevelt emphasized moral conduct so much, he minimized doctrines that are essential to orthodox Christian faith. Contemporary believers must resist the urge to downplay essential Christian doctrines in efforts to find allies in the culture wars.

While Christian historians can never know with certainty if people from the past were truly born again, they can point to patterns in people’s lives. From my vantage point, Roosevelt’s life of faith offers both encouragement and caution. People are complex—and contemporary evangelicals can appreciate aspects of Roosevelt without adopting his outlook wholesale.

Dr. Benjamin J. Wetzel is assistant professor of history at Taylor University. He is currently at work on a religious biography of Theodore Roosevelt (under advance contract with Oxford University Press). A version of this essay first appeared at The Gospel Coalition on January 6, 2019.