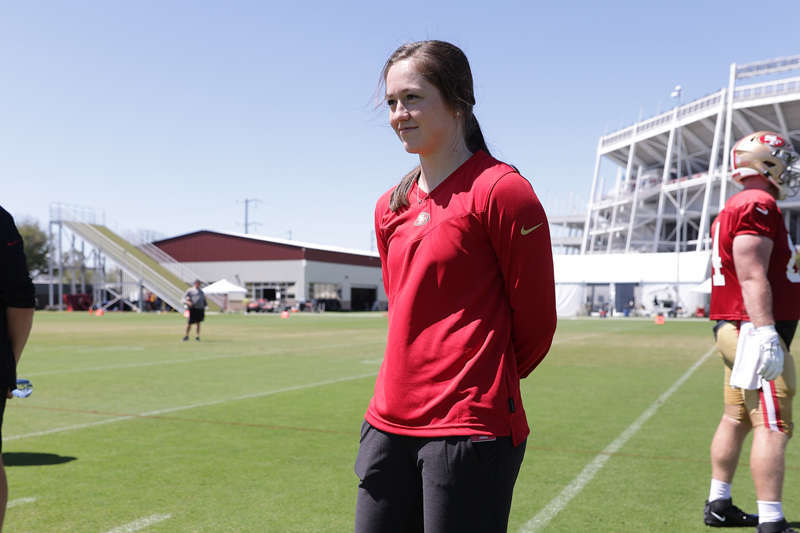 Editor's Note: Since posting this story, Lauren James accepted a full master's degree graduate assistantship in data analytics at Georgia Tech in the fall. She will be an assistant basketball coach for the women's team, in charge of their analytics and some team management.

The Taylor University Mathematics Department encourages students to pursue their passions as true mathematicians whether in education, business, ministry, web design, cybersecurity, or other pursuits. Students participate in career-prep opportunities, while also being challenged to explore the connections between mathematics and the Christian faith. Lauren James ‘22, double majoring in Mathematics-Interdisciplinary and Computer Science with a minor in Data Science, is just one of Taylor’s students living out this mission.

James is passionate about two things: sports and data analytics. At Taylor, she discovered the perfect integration of both when she completed an internship this past summer with the San Francisco 49ers as a data analyst for player positions.

Practical experiences through internships, research projects, and student teaching are a fundamental part of math degree programs, in order to prepare students for graduate school or career.

“When you are a math major, right off the bat, we want you to see yourself as a mathematician, a scholar, and a professional,” said Derek Thompson, Department Chair and Associate Professor of Mathematics.

In the past, the math students have interned for companies like NASA, NSA, Amazon, and Hershey. James applied to internships within the NFL and NBA exclusively, landing her an interview with the 49ers that turned into an incredible internship experience.

Internship with the 49ers

For six weeks, James lived in the team hotel and worked alongside the players, scouts, and managers. She worked directly with the Research and Development Department, which is in charge of working with the coaching, performance, and scouting staff through the use of analytics.

Along with another intern, she was tasked with leading a project that conducted a study on evaluating player positions. At the end of her time with the 49ers, James was given the opportunity to present her findings to the Vice President of Business, General Manager, and owner, as well as the full front office.

“The experience of being in the front office of a professional, well-led, and well-organized NFL organization was really awesome,” James said.

In addition to her time in the office, James got to stand on the field for two preseason games, as well as practices.

“You see these people on TV, but sometimes you forget  that they are actual people,” James said. “To see Patrick Mahomes warming up in person was surreal.”

Living in the same hotel as the team, James had other surreal experiences that are the dream of every sports fan, like going from watching players such as Ha'Sean "HaHa" Clinton-Dix return interceptions, to riding in the same elevator.

“Honestly, most of the players are really down to earth, which is really nice to see,” James said.

Whether it was a “hi” coming from kicker Robbie Gould or listening to Wes Welker’s talk about playing with Tom Brady over lunch, James was welcomed as one of the team.

The Influence of Sports

Sports have always played a significant role in James’ life. She played basketball in high school, and she is currently wrapping up her fifth year at Taylor on the women’s varsity basketball team. Statistically one of the strongest players on the team, James attributes her success both athletically and academically to her coach Jody Martinez.

After being redshirted due to a season-ending injury during her junior year, James immediately knew she wanted to extend her time at Taylor in order to play another season.

With the addition of another year at Taylor, James was able to add a double major in mathematics. As a freshman, James had come to Taylor wanting to focus on computer science, due to her interest in programming. Through her courses, she discovered a love for data analytics as it allowed her to pursue both sports and math.

“I didn't realize how much I missed math until I got back into the classes,” James said.

Data Science as a major is a recent addition to Taylor’s math department. Data Science is built on both mathematical and computational reasoning and relies heavily on multi-disciplinary thinking. Our program teaches students how to collect raw data and how to make the data useful, turning the information into insights and predictions.

James said that while she knew that the sports world was increasingly becoming more analytical, it was not until her internship that she discovered the amount of data involved.

“To combine my love for analytics, math, and sports, is perfect for me,” James said.

The possibilities for math majors are truly endless because companies are on the search for people well equipped to handle data and problem solving. Thompson says that companies actively looking for PhDs in mathematics to hire because they have so much information that they need help analyzing.

It is also not uncommon for Taylor math major graduates to pursue medical school and law school. Whatever your interests, math can be incorporated in any field through Taylor’s supportive professors, professional connections, and flexible courses.

James feels like she gained a lot of invaluable information during her internship, and that the Taylor Math department equipped her well for the position.

“There were a lot of math classes that I added, once I added my math major,” James said. “They equipped me really well for the work I was doing in my internship.”

James credits the personal growth she has experienced at Taylor beyond the educational preparation she has received.

“Taylor equipped me well to enter into a secular environment,” James said.

James said that she experienced a whole different environment during her internship that was in a lot of ways, completely contrary to Taylor.

“I thought it was really cool to be myself with the 49ers, because to be honest with you I don’t know if I worked with another Christian," James said. “I think it was a really cool opportunity to represent Jesus to others. I hope that they saw Jesus in me, either through how I worked or just how I approached everything.”

After she graduates in May, James anticipates pursuing a master’s degree coupled with a graduate assistant women’s basketball coach position as well. There is a huge government-led push to fully fund math majors in pursuit of graduate degrees, in order to put more people qualified for STEM in the workforce. Many math majors are able to pursue graduate school on full-ride scholarships, entering the workforce with little to no student loan debt.

Long term, James hopes to join the staff of an NBA or NFL team to work with data analytics. Her dream teams include the Colts or the Pacers because she has a heart for Indiana. This upcoming summer James gets to live this dream out as an intern with the Indiana Pacers working with data analytics.

Taylor’s Math Department prepares students to engage in problem solving that can apply to a variety of areas in the workforce. Schedule your personalized campus visit today.