From Internship to Career: How Networking Can Grow Opportunities 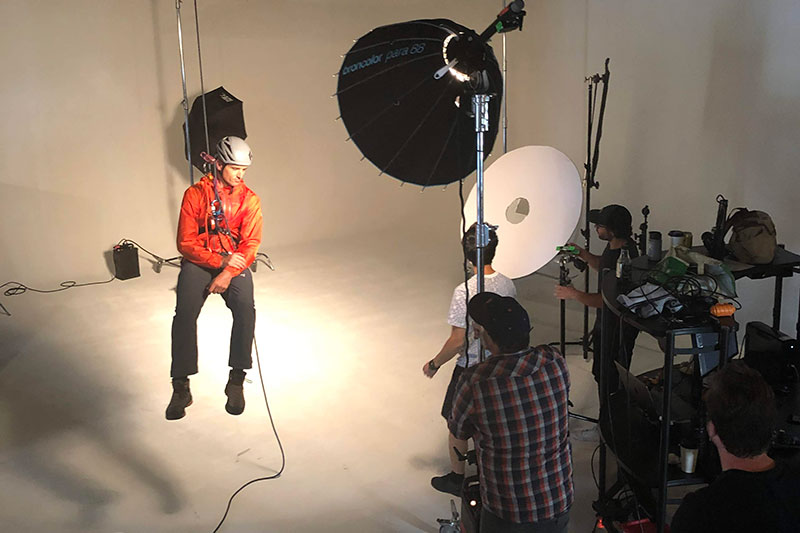 Internships and networking opportunities can make all the difference when looking for career experience and job connections. At Taylor, Art and Film majors can count on gaining real-world experience to expand their portfolios and professional circles.

The Art and Film programs bring in industry experts to provide insight and opportunities, top-notch facilities, and qualified faculty and staff to help students develop their skills, all while exploring how faith impacts their work.

For senior Graphic Art major Ross Kimbrell, developing his Photography concentration meant taking advantage of these opportunities to further his dream: a career in commercial photography.

Networking as a Student

Ross Kimbrell attended one of Taylor’s annual artist symposiums where Seattle-based photographer Brandon Hill spoke and answered students’ questions. After hearing about Hill’s experience with companies such as Disney, Nintendo, and Purina, Kimbrell connected with him in person following the symposium.

“Long story short, Brandon initially became an email resource for me after I went up to him and gave him my information in person,” Kimbrell said. “That was the key. I eventually just asked if he would like an assistant or an intern for the summer, and after deliberating with another photographer friend of his, they accepted my offer.”

At that internship at The House Studios in Seattle, Kimbrell spent his summer working alongside Hill gathering equipment, adjusting lighting, and assisting other photographers during photoshoots. Sometimes the work was exhausting, but he was so grateful for the experience that the highlights far outweighed the challenges.

One shoot that stood out to Kimbrell was for the Disney Villainous board game and puzzles. He felt it was incredible to work in the presence of such creative and influential individuals. But not every project was easy.

For a shoot for a water treatment company in San Jose, California, Kimbrell and Hill packed up all of their equipment for the plane ride and spent four days there, working early mornings and well into the heat of the blazing California sun.

At first, Kimbrell battled burnout and doubted if his contributions truly mattered. But eventually, he found unexpected beauty and blessing in toting 60 pounds of equipment all across San Jose.

“It made me stronger both physically and mentally, and made me realize that toting equipment is worth it as long as you keep a cool head—especially when meeting people who could change your life,” Kimbrell said. “Because of the San Jose shoot, I am now connected to a larger potential client base and thus a beneficial group of people. I encourage other students to not only put on a smiling face, but to genuinely try and enjoy whatever it is they're doing and learn from it.”

Not only did Kimbrell’s time in Seattle help him grow in his career expertise, it also helped him grow in his faith. Exercising independence in an unfamiliar place was a new experience for him and this stretched him spiritually.

“Once you go it alone, you begin to learn that you need to rely on God in new ways, as I did,” Kimbrell said. “The real world will have new ideas that you need to cross reference with God’s Word and find for yourself whether you agree with them or not. Altogether, Seattle was a classroom and I felt like a brand new student.”

Focused on the Future

Because of his initiative in cultivating relationships, Kimbrell built bridges that led him to return to The House Studios in Seattle in the summer of 2020—this time with a paid position instead of an internship.

He attributes his proficiency in Adobe programs, handling equipment, and the technical side of artwork to his time in the classroom at Taylor, and he is also grateful for the lessons he learned outside of his textbooks.

“I am a firm believer that no classroom, no matter how prestigious the school or its teachers, can teach a student what it’s like to really experience their real field of study,” Kimbrell said. “That’s the main reason why I love that Taylor requires some type of internship or practicum from practically all of its students.”

Kimbrell believes that one message, one conversation with a Taylor professor or professional, and one burst of courage could lead to an opportunity that changes the course of a students’ career path.

“All I did was send one email like a shot in the dark, and it worked,” Kimbrell said. “It could happen to you!”

For more information on how Taylor connects students to internships and professionals in their field, check out what the Calling and Career Office can do for you.