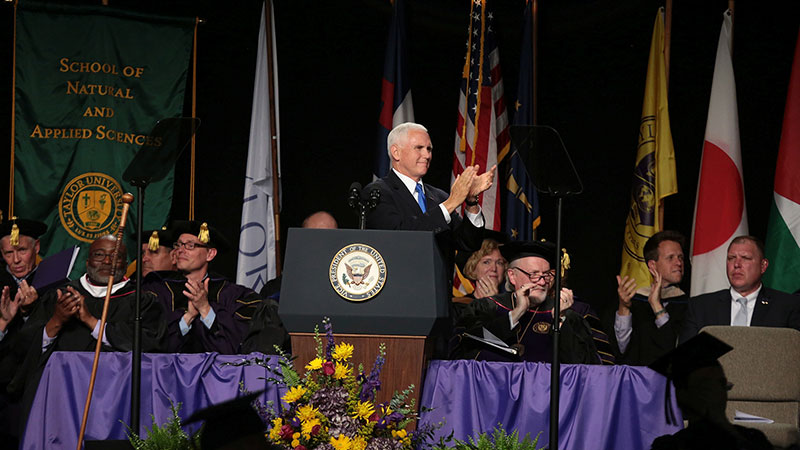 Upland, Indiana – A speech by Vice President of the United States Mike Pence and the awarding of a diploma to the 25,000th graduate in Taylor’s history were highlights of today’s commencement ceremony at Taylor University.

Four-hundred-ninety-four graduates of Taylor received diplomas, a servant’s towel, and a Bible during the ceremony.

Emily Calvani was the 25,000th graduate in Taylor’s 173-year history, dating back to when it was founded as Fort Wayne Female College.

Vice President Pence, the former Governor of Indiana and a six-term Congressman prior to his election as Vice President in 2016, addressed graduates, their families and friends, and stayed to shake hands with the graduates. As anticipated, an estimated 40 graduates and several faculty left the fieldhouse prior to Pence’s commencement remarks. The remaining crowd of nearly 6,000 gave the Vice President three standing ovations.

“I want to say, not so much as your Vice President or a fellow Hoosier, but as a brother in Christ: If what you’ve seen and heard and learned in this place has also taken hold in your hearts, I want to encourage you to go from here, and live it out, and share it, and put feet on your faith as you carry and minister over the course of your lives,” Pence said. “Because America needs men and women of integrity and faith now more than ever.”

“Commencement is a highlight of every academic year, and the culmination and celebration of each of our graduates as they leave Taylor and move on to lives of service marked by love for God and all people,” Taylor President Paul Lowell Haines, EdD, JD, said. “What a legacy we hold dear – an institution that has been educating young people with the integration of faith and learning since 1846, and today celebrating 494 new graduates, among them the 25,000th graduate in Taylor’s history.

“It was an honor to host Vice President Pence today,” Haines added. “We are grateful for him coming to campus, for sharing in this special day, and for his encouragement of our graduates to live lives marked by faith in God and service to others.”

The 494 graduates of Taylor University’s graduating class consisted of:

In addition, study abroad opportunities remain popular and important to Taylor students, with 65% of this year’s undergraduates having had at least one such experience. When other service and ministry-oriented trips are included, the percentage of students having international experiences is even higher, with many having two, three, or more.

About Taylor University: Founded in 1846, Taylor University is a premier, nondenominational, Christian liberal arts university and the number one college in the Midwest Region as determined by U.S. News and World Report’s survey of best American colleges. Located in Upland, Indiana, Taylor has achieved this ranking 11 of the past 12 years, and been ranked in the region’s top three for 22 consecutive years. Taylor has also received high regional and national rankings from Open Doors, a survey associated with the U.S. Department of State that measures study-abroad programs, as well as Forbes and Princeton Review. With more than 60 fields of major studies, Taylor University’s alumni serve in occupations ranging from medicine and computer programing to education and law.

Taylor University is a member of the Council for Christian Colleges and Universities (CCCU).