Filmmaking Through a Lens of Faith 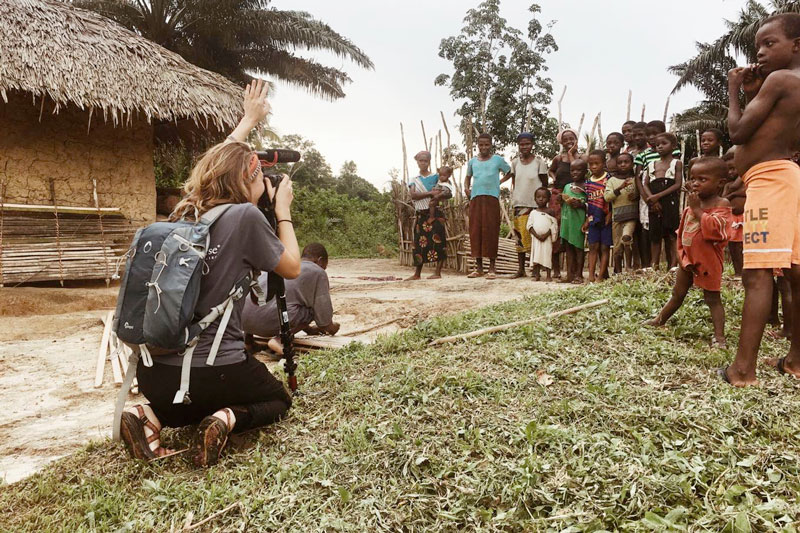 For alumna Olivia McCash (‘17), the film department’s hands-on opportunities equipped her to tell stories of God’s power and work around the world as a cinematographer and editor for The Christian and Missionary Alliance. Her classroom training, combined with study abroad experiences, provided her with a wealth of wisdom and preparedness for her career journey.

McCash's interest in camerawork was sparked at an early age, making home videos with her parents, siblings, and friends. When her elementary school teachers made recap videos for students at the end of the year, she recalls being drawn to the music, shot selection and cuts—the whole process. Eventually, she got her first camera in junior high and would beg her parents to drive her to nearby fields to shoot before school.

When she began high school, McCash took her first international trip to the Dominican Republic and brought along a tiny point and shoot camera to film her experiences. When she returned, she edited her first video on a rented computer while sitting on the floor in the school hallway.

“I thought, ‘This would be so cool if this was a job,’” McCash said. “The big realization I came to in sharing this video was the power story had to move people. I couldn’t believe that something I had created, though small, could still make others feel something enough to bring tears. I wanted to keep doing that in the kind of stories I told.”

McCash spent the last few years of high school making videos with whatever spare time she had, merging her love for photography with her interest in videography.

Upon arriving at Taylor for her freshman year, McCash majored in Film and Media Production and minored in Photography. She never second-guessed her choice.

“I can look back and see all these tiny common threads in my story that were all pointing towards where I am now,” she said. “Those small things really do matter.”

Storytelling in the Classroom and Cross-Culturally

Taylor Film and Media Production students not only learn the film fundamentals—such as screenwriting, cinematography, directing, producing, editing, sound design and more—they also practice how to step into a variety of contexts with professionalism and faith.

Two of McCash’s favorite courses were Producing for Clients and Narrative Filmmaking, which she said were incredibly helpful in giving her practical experience working on and leading a team as a producer. McCash learned how to communicate well, champion her team and make stories happen no matter what obstacles they faced.

While she said she was impacted by too many people to count during her time at Taylor, Professor of Film and Media Production Kathy Bruner was one of her biggest role models. McCash learned several valuable lessons about ethical storytelling and strong leadership from her mentorship. She said they often had valuable discussions on vocational calling, and even before committing to come to Taylor, Bruner was an encouragement to her.

Her time working with Bruner also prepared McCash for her job at The Christian and Missionary Alliance. Shooting a documentary together not only taught McCash the technical components of working in that genre, the experience taught her that mastery of these skills isn’t enough to tell a compelling story.

“You have to honor the individual above all else, knowing when to pull back and provide space and when to press in, constantly staying in-tune with your intuition,” McCash said. “It’s the balance between respecting a boundary and digging deeper into the story that needs to be told. It’s staying a safe space. It struck me how wild it was that we were even being trusted with this task—inserting ourselves right in the midst of these people’s lives, camera in hand, following along with every moment—every small victory and crushing moment. I don’t think you ever stop learning how to do this better.”

Getting to travel as a student was also a significant part of McCash’s journey. She quickly discovered her passion for intercultural experiences. She was able to integrate these passions into her film and photography work and continues to use and develop these skills now.

“My Taylor experience prepared me for my current role by giving me a tangible understanding of the entire process of seeing a project through,” McCash said. “Additionally, I was able to uncover the specific type of stories I care most about telling. I was able to take advantage of opportunities to study and serve abroad—which is a big part of my job now—all while incorporating my love for telling stories and growing in cross-cultural awareness.”

McCash spent a semester abroad in Greystones, Ireland and a January-term trip in Southeast Asia. After she graduated, she lived in Liberia for seven months, serving as a communications intern. She said each of these experiences introduced her to incredible communities and taught her how to better invest in and love the people around her, no matter how much time she had with them. She was astounded by having family through the body of Christ.

“Every time I found myself in a multicultural setting, it was that heart-about-to-burst out-of-your-chest feeling, that overwhelming love for people that literally brings you to tears—the feeling of being completely at home even when you’re in a place you’ve never been,” McCash said. “In each of these seasons, the Lord continued to pull me into deeper relationship with Him. Living cross culturally, though wonderful, still presented many difficult and lonely moments, and I learned how to rely on nothing but Him, sitting in His presence for longer than I ever have, praying messy, desperate prayers when darkness felt heavy.”

For McCash, a typical day working with The Christian Missionary Alliance varies. Oftentimes, she spends her day editing stories from domestic and international sites. Other days, she might be in pre-production: envisioning how a story may develop, writing a script or sorting through the details of an upcoming trip. Sometimes she’s on the road, traveling to U.S. churches or international sites to tell stories of God at work around the globe—though the spread of COVID-19 has limited her travels this year.

One of McCash’s most recent trips was to Cambodia, where she followed the story of a man whose life and heart were radically changed by a miraculous healing. When the man was injured and his eye came out of its socket after the walls of a brick kiln collapsed on him, the doctors did not know what to do. Fearful he had no hope of healing, he asked his wife to take him to her church. There, believers prayed over him, and when they opened their eyes, his own eye was restored.

The man was so overcome by this miracle that he dedicated his life to Christ, traveling far and wide to spread the gospel by bicycle and on foot to reach as many people as possible.

“I spent just one day with him, and it was like the book of Acts—people heard he was coming and would call to him, asking to learn about Jesus and receive Him,” McCash said. “We were pulling the car over on our drive to pray with people in their homes. It was just astounding. It was like a wildfire spreading.”

While McCash gets to witness to God’s presence and healing in her work, she is often also in close proximity to suffering and pain. In these moments she strives to love people well, holding their stories with grace and empathy. Her goal is to leave people better than she found them, even in the face of tragedy.

“Are there still questions of ‘why?’ Of course,” McCash said. “But because of my faith, I’m able to engage with brokenness and draw from my source of truth. I’ve learned how to sink deeply into the Lord’s presence for peace and strength. At the end of the day, it’s not about the final product, though that is important. It’s the privilege of being able to sit with people in the trenches, to comfort, to hold the broken in the midst of grief. To be able to do those things and glorify Jesus is absolutely the most fulfilling work.”