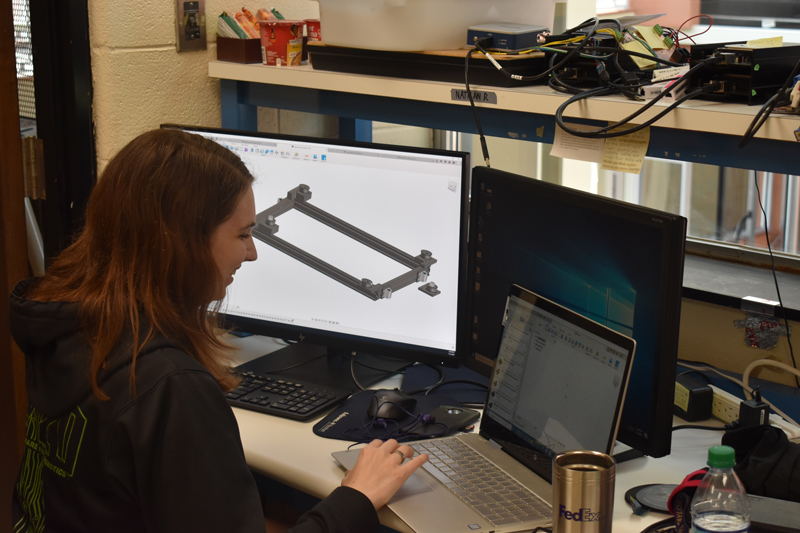 Every Engineering student wants to work on projects that have real-world impact. At Taylor, students are challenged to go beyond problem-solving for this planet alone. Drawing from knowledge of mechanical, electrical, and computer engineering, students are building a robot that has the potential to construct habitats for humans on the planet Mars.

Why Construct a Human Habitat on Mars?

Sending people to Mars might sound a little surprising, but the idea of human settlers on Mars has been discussed by major names in space exploration since the 1940s. NASA, Boeing, and SpaceX, among others, have created proposals for human missions to Mars. SpaceX, in particular, has proposed establishing a Mars colony consisting of thousands of people.

Despite its similarity to Earth, Mars is a really harsh place to live. The surface temperature averages about -80 degrees Fahrenheit, there’s essentially no oxygen, and radiation is high because of the lack of a magnetosphere. Also, the dust in the air is poisonous. Still, a strong presence on Mars means people could reach out to other parts of the solar system. The lower gravity of Mars makes getting spacecraft into orbit much easier and lower cost, thus enabling more bold missions to the far reaches of the solar system.

Transporting pre-constructed habitats to Mars for thousands of people isn’t feasible, because they would have to be small and lightweight to be transported from Earth. Such structures would provide insufficient protection from radiation and still be prohibitively expensive.

“We need buildings big enough for thousands of people to live and work safely. They must provide protection from the harsh Martian environment and allow people to thrive. Exercising, growing fresh produce, and fixing rovers takes space. You get there by making a structure from materials found on Mars,” said Dr. Peter Staritz, assistant professor of Engineering.

With the guidance of Taylor faculty, Engineering students are building a 3D-printing robot that’s up to the challenge of meeting these significant requirements. To print structures, the robot uses sulfur concrete, which is a mixture of sulfur and sand. These materials are abundant on Mars and will be easy to obtain. Once mixed, the materials are heated above the melting point of sulfur, extruded, and then allowed to cool. The resulting concrete-like material is strong, insulating, and efficient to produce.

To print this material, students designed a robot dubbed “Mud Dauber.” The robot has the ability to move and print at the same time, and because it can roll on its own printed structures, it can build structures taller than itself.

“The work our students are doing is masters-level graduate work,” said Staritz. “The questions we’re trying to answer are contributing to the actual body of knowledge. They’re designing things with no set or best answer, and blazing new ground every day.”

This semester, students are again working on this technology, developing new tools and methods to improve the quality of the printed product.

As part of the curriculum during their junior and senior years, engineering students at Taylor focus on a major project that applies engineering, math, and science knowledge to solve a multidisciplinary problem. For the last two years, various subsystems of the robot have been that concentrated project. Additional students have contributed to the work as participants in faculty-led summer research.

“I think the most rewarding part of working on the robot were those points in time when I struggled really hard with a difficult technical issue and finally solved it,” said Caleb Miller '21, who worked on the machine throughout his junior and senior year. “Some of my biggest takeaways were learning how to manage a project that takes over a year to complete.”

Funding from the Indiana Space Grant Consortium (a NASA program) and the dedication of Taylor faculty have enabled the Mars robot project to progress.

“As faculty, our purpose is to invest in our students,” said Staritz. “We put time and effort into our students’ experience. Our main goal here is to produce excellent engineers; we do this by focusing on projects that are challenging, relevant and inspirational.”

Schedule your campus visit today to see our students in action in Euler Science Complex and talk to faculty about your interest in engineering.