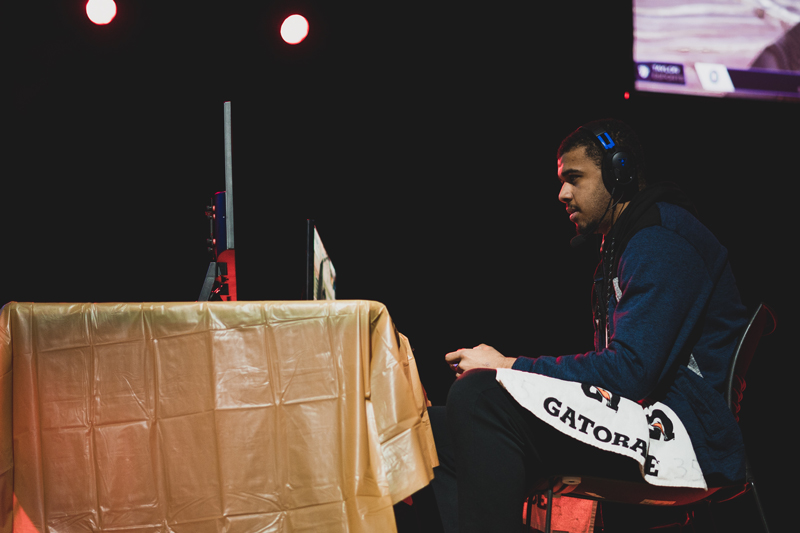 At Taylor, developing a strong community is one of the most vital parts of the university’s mission. Whether through student organizations, athletics, academic programs, or in the residence halls, students are always striving to connect with one another in meaningful ways.

For Cybersecurity major Matthias Dean (‘22), starting the esports club on campus was a way to combine his love of video games with his love for the Taylor community.

Dean started playing Rocket League, a vehicular soccer game, in 2015 and discovered the world of competitive gaming known as esports. When he arrived at Taylor and didn’t see an esports team, he decided to start one.

“I’ve always been into esports and I wanted to continue to play in college, but Taylor didn’t have an esports club,” Dean said. “It started with me finding a few people on campus who like to play Rocket League and then that turned into competing for the school and in other games. We didn’t have any infrastructure built, so I started working on creating Taylor’s esports club so that it’s not just competitive but there’s casual gaming as well.”

Organizing esports events and teams was not a new endeavor for Dean. In 2016, he began working for Ascending Champions Esports to organize tournaments. Within his first year, he helped grow the competitions from 40 players to 3,200 players.

Dean’s original intention for Taylor’s esports club was to create a competitive team, but soon switched the focus to creating a space for casual gamers to play together. The esports club is now the largest club on campus, boasting around 200 members. The club hosts events such as Call of Duty tournaments and Minecraft nights.

Even though tournaments are online, Covid-19 impacted the club’s ability to meet in-person during the 2020-2021 school year. The club was able to host some events, including broadcasting the intramural final for Rocket League from the Rediger chapel.

“It was really cool to do the intramural finals on stage,” Dean said. “We had close to 75 people cheering for their favorite teams to win.”

Being at Taylor encouraged Dean to claim his faith as his own, not just the faith of his parents. Growing up as a pastor’s son, Dean knew all the tenets and nuances of Christianity, but since attending Taylor, he has begun to personalize his faith. He found his trip to Israel with Taylor’s Introduction to Holy Land Studies program to be incredibly impactful.

“My freshman year, I really realized the importance of having that personal relationship with and dependence upon God,” Dean said. “It was J-term my sophomore year where I was rebaptized in Israel and that was the expression of the outward change I had been actively working to make in following Christ.”

Dean incorporates his faith into everything, esports included.

“There’s a definite need in the world of competitive gaming for Christ’s love and redemptive power to work,” Dean said. “By simply being in that environment and reacting to situations differently, you’re able to demonstrate the love that is within you and from Christ.”

The club uses Discord to host virtual events and provide a space for students to connect with each other.

“My hope is that anyone and everyone who plays video games is able to use Taylor Esports to find other students on campus that have the same enjoyment and are able to play together, as well as have competitive teams to represent Taylor University,” Dean said.

Interested in finding ways to get involved in the community as a student at Taylor? Learn more here.