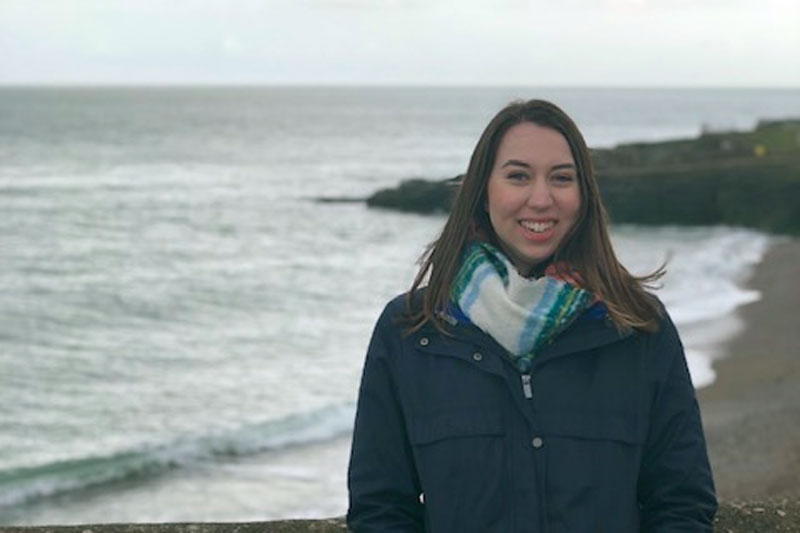 Taylor’s Political Science, Philosophy, and Economics (PPE) major exposes students to a wide range of topics, all while finding connections between each subject.

For Carlee Svec ‘20, the PPE major gave her a broad understanding of multiple disciplines that proved invaluable during her internship at the United States Embassy in Dublin.

As a student, Svec heard about the US Department of State Student Internship Program and was immediately intrigued, as she has an interest in diplomacy and public policy. After studying in Ireland during her freshman year and spending another semester abroad her junior year with Taylor’s Irish Studies Programme, Svec was eager to return to Ireland.

Working in the public affairs and press office at the Dublin embassy, Svec’s job consisted of “intern things” like making coffee and organizing offices, but she was also given top-secret clearance. She met with Americans working at the embassy on a weekly basis to discuss what each section was doing.

Svec helped plan and coordinate 15 events during her time at the embassy. Her favorite was the Fourth of July party.

“One of the reasons why it was my favorite is it was just a huge party, so it was a really fun event,” Svec said. “It also took a lot of coordinating. We were there for two or three days at the ambassador’s residence ahead of time setting up everything…I got to meet a lot of Irish government officials as well. It was a great opportunity for me to network and talk to a bunch of people who work for these American companies abroad and see how they’re doing.”

While her plans have been put on hold because of Covid-19, Svec hopes to return to Ireland and pursue a graduate degree in Public Policy.

Svec said that while PPE seemed daunting at first, she found that the broad nature of the major provided freedom for individual study and to explore other subjects. Incorporating that into a liberal arts degree was something she appreciated.

“Knowing a little about a lot of things and knowing a lot about my major was super helpful,” Svec said. “Learning about other things, like taking a psychology course and a computer science course and an art course, expanded my capacity to learn more about my major.”

Svec’s favorite course was American Foreign Policy with Dr. Nicholas Kerton-Johnson because of the background knowledge she had of American diplomatic relationships before working at the Embassy.

“I was really well-prepared going into that internship,” Svec said. “Because I already knew a decent amount about policymaking from my public policy classes that I’ve taken, as well as specific American foreign policy and understanding how the State Department works, I had a working knowledge of that before I got there.”

Svec found the Calling and Career Office to be incredibly helpful as she applied for internships and prepared for interviews. The CCO provided mock interview questions and gave Svec the practice she needed to feel confident.

While Svec said that she was grateful for the impact being a Taylor student had on her personal development while she was a student, she is even more aware of how her Taylor experience shaped her post-graduation.

“Taylor was a really good place for me to deepen my faith and extend my faith,” Svec said. “It also gave me a really safe place to ask a lot of questions through the extensive support that comes with being in a Christian community.”

Interested in a degree in Political Science, Philosophy, and Economics? Learn more here.