Elevating the Conversation Around Voting 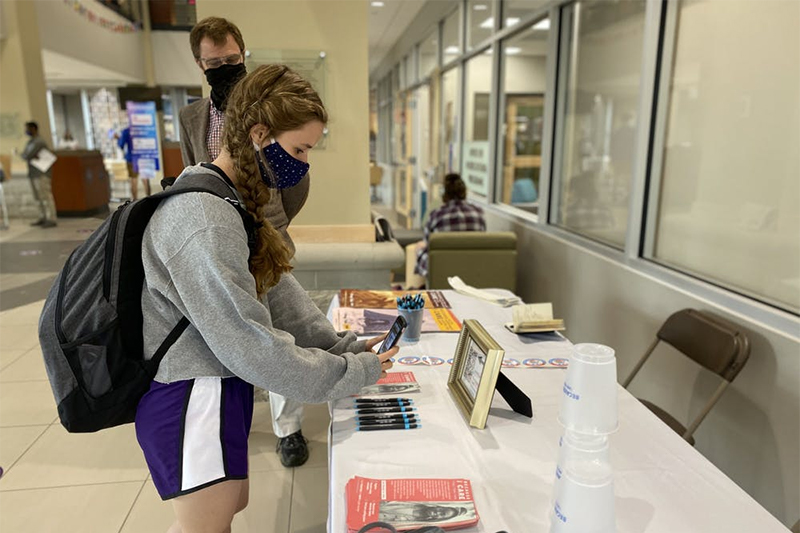 Election years have always provided opportunities for robust discussion at Taylor University. This year, a group of students have been leading the way in helping the campus engage in healthy dialogue and civic action. Their goal? To help their fellow students grapple with issues, understand why they hold particular values in politics, and take action through submitting absentee ballots.

“Politics and elections are really important, and how you vote reflects on who you are and what you believe,” said Maddy Miller, a senior Strategic Communications major from Finley, Ohio, who is in charge of communications for The Booth, the student-led election program.

“What I’ve seen on campus is that either people don’t want to talk about politics at all because it’s divisive, or they want to assert what they believe really strongly but are unsure how to do in a way that doesn’t offend anyone. This program is centered around helping students have good dialogue,” she said.

Miller’s involvement in election programming started last year when she needed to do a practicum for a class. She reached out to the Calling and Career Office (CCO) for help, and eventually got connected with a new program that centered around the election. Even when the campus shut down because of COVID-19 in the spring, she continued to meet with Taylor leaders to develop objectives for the program and recruit students to serve on the advisory council.

Miller took on the role of social media manager, and throughout this semester, she has been busy hosting watch parties for the presidential and vice presidential debates, scheduling events with speakers like author Andrew Whitehead, and helping students register to vote.

“When I first came to Taylor, it was fresh off the 2016 election,” Miller said. “A lot of people were talking about politics more than I’d heard in my life. For the first time, I started grounding in my own beliefs rather than just what my parents taught me.”

The more she engaged in the conversations around her, the more Miller saw strong connections between political and civic duties and her own faith. “As I thought about it, I realized that I really should care about what happens to my country. I needed to do my own research and understand what voting as a Christian really looks like,” she said.

Taylor political science professor Jakob Miller (pictured above) got the ball rolling on Constitution Day, which is September 17, when he organized a voter registration event for students, where they could scan a link that would allow them to quickly register to vote.

Addy Perry, a sophomore Finance and Management major from Toledo, Ohio, got involved with The Booth through a class project. Although she had enjoyed her high school class on American government, she hadn’t really been involved with anything political before. Her experience with the program has given her a deep desire to take initiative and make sure her views are represented.

The Booth is less concerned with specific views, though, and more focused on helping students develop the skills to ask good questions, engage in constructive dialogue, and become informed voters. “So many of us are wrestling with how to keep our convictions without offending or being inconsiderate,” she said. “How do we hold our beliefs and create space for compassion? It’s hard to do, but we’re working together to hold spaces for those conversations.”

"How do we hold our beliefs and create space for compassion? It’s hard to do, but we’re working together to hold spaces for those conversations." Addy Perry

Last week, Perry camped out in the Boren Student Union for several hours, helping students submit their absentee ballots. She and her team had laptops ready for students to use, then printed out the ballot and provided stamps and envelopes. “Our generation is being proactive about voting and taking civil duty seriously,” she said. “Our goal [at The Booth] is to make it easy for them to make their voices heard.”

The 2016 election season was difficult for the entire country, and Taylor was no different. Anticipating that the 2020 election might be just as polarizing, Jeff Aupperle, director of the CCO, and Steve Austin, director of Student Programs, decided to take a more preemptive approach in preparation, and recruited about 15 students, including Perry and Miller, to serve as an advisory council and manage events.

“We wanted to create an environment that reflected the Life Together Covenant and the community expectations we have together,” Jeff said. Taylor’s distinctive discipleship community focus is a key part of those messages. The mission of Taylor is to develop servant-leaders marked with a passion to minister Christ’s redemptive love and truth to a world in need, and there’s no question that the need is great.

“Rather than focus on who to vote for, we have tried to persuade students to think about why and how they vote. What are the motivations and values that inspire you to vote? By elevating the conversation away from an ‘us versus them’ mentality, we’re getting down to the roots about why we vote in the first place, and what motivates our vote. In pointing students to that kind of conversation, as opposed to one focused on candidates or parties, it’s helped them take a step back and look at the bigger picture.”

"Rather than focus on who to vote for, we have tried to persuade students to think about why and how they vote...By elevating the conversation away from an ‘us versus them’ mentality, we’re getting down to the roots about why we vote in the first place."

Aupperle is also preparing for how their team can help the campus respond to the election’s outcome in just a few weeks, making sure that all students are cared for well and equipped to process the results in a way that is honoring to God.

“I’m encouraged that we, for the most part, have a group of students on this campus who are not satisfied with the rhetoric and bickering that they see on the national stage,” Aupperle said. “There’s a desire on their part to do this conversation better, and to let the principles of our Christian faith guide us in these discussions. It’s really hard to do, but let’s not be afraid of the conversation.”