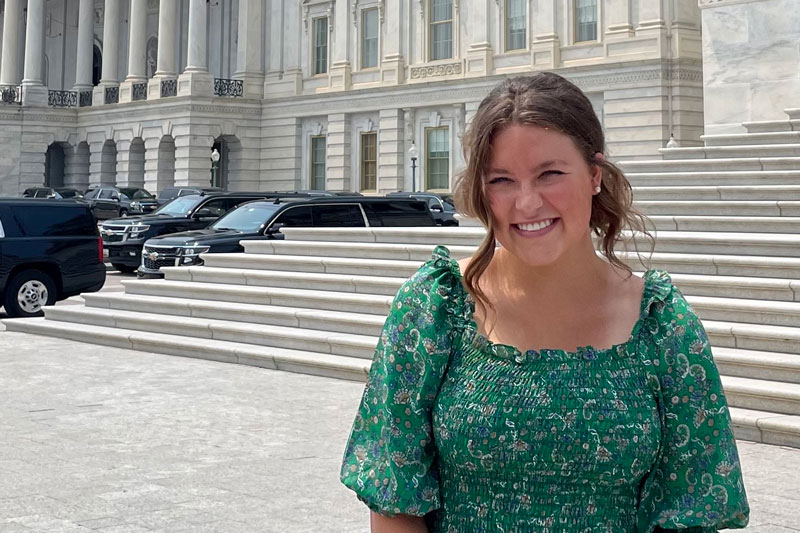 Taylor University’s small size and vast network gives students many hands-on career opportunities from the minute they step on campus. For sophomore Kyla Russell, she found that even in her first year, Taylor equipped her well for her internship experience in Washington D.C. press, and beyond.

Russell had a passion for telling stories from a young age, and has always loved the energy surrounding politics. She has applied her love for both into her Multimedia Journalism degree at Taylor, which had been her dream college since middle school.

Coming into college, Russell felt she needed to decide between being a press secretary or a journalist. She figured the only way to know was to get experience, so she applied to every internship she could find online. In the January 2021 interterm, she started an internship for Indiana Senator Todd Young’s press team. Just a few days into the internship, she found herself on Capitol Hill on the day of the January 6 insurrection.

“There was this pivotal moment when no one was allowed in the Capitol at that time,” she said. “Security was on insanely high alert, and I had to walk through bomb-sniffing dogs.”

She persevered through the tense atmosphere of that month and earned the respect of her co-workers. Senator Young’s press secretary encouraged Russell that she could do journalism with the goal of press secretary experience some day, as the two roles smoothly feed off of each other.

At the end of the year, she knew she wanted foreign policy experience. Although domestic policy is her passion, she recognized that one intersects with the other and wanted to make herself more marketable.

Through working with Senator Young in January, she became connected with The Turkish Heritage Organization, a think tank based in Washington, D.C., that focuses on NATO affairs and Trans-Atlantic alliances.

During the summer, she was the head communications intern. She partook in writing press briefings and meetings with foreign policy experts and ambassadors. During her time, the organization also hosted the Deputy Minister of Foreign Affairs of the Republic of Turkey, U.S. Ambassador James Jeffrey, and US-Turkey relations expert and professor Mark Meirowtiz. Her biggest accomplishment was establishing a podcast called “NATO Need to Know,” where she produced a weekly roundup of the biggest NATO-related stories.

“My goal was to make things really tangible for people in the Midwest who don't know anything about NATO,” she said. “I previously didn't realize these things are so important to our wellbeing, and that they impact everyone.”

At first, Russell thought that her goal was to work in the White House or on Capitol Hill, but she's now open to anything where she can speak truth in power. Today, Russell is practicing her skills through all of her involvements at Taylor. Her experience as the News Co-Editor of The Echo, Taylor’s student newspaper, has been her best Taylor experience so far.

“I feel that other school newspapers are probably bigger in staff,” she said. “Because of The Echo’s size, I've been able to explore so many areas of a newspaper, and it has allowed me to decipher so much faster than I think other students can to know what part of journalism I want to be in.”

Russell also greatly appreciates the mentorship with the upperclassmen on staff that The Echo has offered her, along with the opportunities Associate Professor of Journalism Dr. Alan Blanchard and other professors, have given her.

“I've never met someone at Taylor that didn't believe in what I could do,” she said. “I feel very strongly that Taylor creates this foundation in this platform for students to really thrive.”

Additionally, Russell is an Honors Guild cabinet member, and loves the deep-thinking peers she is surrounded with there. Students who are intellectually curious, and desire to understand the ways culture, ideas, and faith impact the world can apply for Honors Guild in their senior year of high school.

She cites the Honors Guild and her Media & Society class for shaping her identity and teaching her how to have conversations with those she disagrees with. She especially appreciates the worldview they gave her, and says that helped set her apart during her internship.

“I was expecting to go to D.C. and for no one to have heard of Taylor,” she said. “I met maybe five people who hadn't heard of it and that was astonishing. It made me realize the global impact that Taylor's having. I heard from several different people, including Senator Young, that Taylor students have the best workplace ethic. I wear that as a badge of honor.”

From Upland to Kabul

The mentorship from those she worked under in D.C., particularly her summer internship director, inspired Russell to push herself further in her world view and truth-speaking abilities.

“One day she looked me in the eye and was like ‘Do you want to cover global issues?” Russell said. “You're the only one that can make that happen, so take opportunities to hear other people’s stories.”

Inspired by the question, she turned to some Afghan influencers she followed as the U.S. military pulled out of Afghanistan in August. She reached out to a few people she had contact with in Kabul to see if they’d be interested in speaking to her, rather than an established journalist.

Russell connected with Fariha Easar, a female lawyer who works as an Islamic feminism and human rights researcher and activist, and Zia Majeed, a pediatrician and father to four children. They spoke over the phone several times, and she is still in touch with them. Moved by what they had to say, she wrote a story and shopped it around to local papers. The Marion Chronicle-Tribune accepted it without major edits.

“I do not feel worthy at all enough to tell the depth and the gravity and the levity of these stories,” she said. “But if I don't, who will? My goal was not to make some sort of global change. My goal was to make change in my corner of the world.  And my goal as a journalist is not to be an activist, but to bring awareness. And so, when someone's willing to tell their story, you jump on that.”

If you are interested in joining the Multimedia Journalism major, read more about our dynamic program and/or contact Dr. Alan Blanchard at: alan_blanchard@taylor.edu  To learn more about guidance in finding an impactful internship experience, check out the Calling and Career Office.