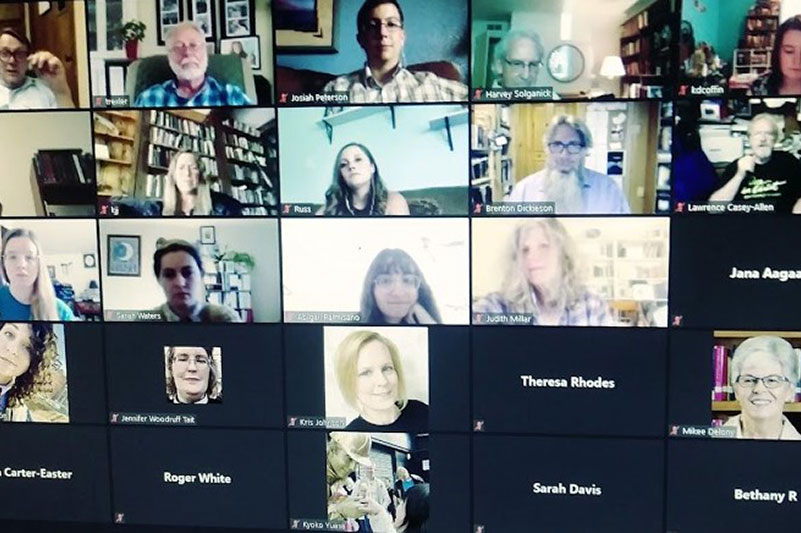 It’s 3:55 on Friday afternoon. Joe Ricke, professor of English at Taylor University, is at his computer, checking to see that the  Zoom meeting is ready to go. He’s got a stack of books and notes nearby, and a steaming cup of English tea is at his elbow.

It’s time for Lewis Tea at Taylor’s Center for the Study of CS Lewis and Friends. Within moments, Kendra Smalley, the Lewis Center assistant, is admitting guests, ranging from first-year college students to Lewis scholars in Japan to missionaries in Costa Rica. They’re all ready to discuss the week’s topic together, bound by a shared love of writers CS Lewis, JRR Tolkien, George MacDonald, and other imaginative writers.

Integrating Faith, Scholarship, and the Imagination

Lewis Teas started in 2016 when Ricke became director of what is informally called the Lewis Center. The Lewis Center promotes the integration of faith, scholarship, and the imagination as modeled by the Inklings, a group of British writers we identify as “C.S. Lewis and Friends.” The Center curates a world-class collection of books, manuscripts, letters, and other materials, as well as offering a rich program of events and outreach initiatives for Taylor University students, the local community, and a worldwide academic and lay audience.

Ricke wanted to encourage students of all majors to feel welcome and participate in discussions and scholarship through these writers, so he started these weekly gatherings. Before COVID-19, Lewis teas were held in the Zondervan Library, with tea and biscuits shared as attendees discussed and presented works of the authors. The Lewis Center also hosted other events, like an all-nighter The Lord of the Rings movie marathon.

“I think the writings of the Inklings and friends appeal to college students because they probe the deeper questions of life and explore many ideas many college students are thinking about from a wise and deeply Christian perspective,” shared Elizabeth Hartmann, a recently-graduated Professional Writing major/Bible minor. “There is something for everyone, from beautiful fantasy worlds like The Lord of the Rings and Narnia to more lesser-known but profound theological and philosophical works. The works of the Inklings and the Lewis teas seem to awaken childhood wonder and stimulate the intellect simultaneously.”

However, as with everything else in our lives, Ricke and the Lewis Center team had to make adjustments after Taylor went online in March following the onset of the COVID-19 pandemic.

“Once I started Zooming my classes, I realized we could still make Lewis Teas work, just, unfortunately, without the tea or the in-person fellowship,” Ricke said.

One of the first remote Lewis Teas was a Tolkien reading day, where participants shared their favorite passages from Tolkien books and writings. The response was overwhelmingly positive, so Ricke decided to keep the Lewis teas going every week through the end of the semester in May. Normally, Lewis Teas pause during the summer so the Center can focus on research and the biennial Colloquium, called “the premiere Inklings conference on the planet” by Devin Brown of Asbury University.

But with the Colloquium postponed to 2021 and 30-50 people regularly signing in weekly for the Lewis Teas, Ricke decided to continue to host them throughout the summer, still every Friday at 4:00.

“It’s important to me to not ignore what is happening in the world around us, but to engage in front-of-mind issues in the context of our specific mission, which is to integrate faith and learning and imagination,” Ricke said.

A recent tea considered the subject of creation in which re-tellings of creation were accompanied on the piano by Clifton A. Davis, director of Taylor’s chapel worship bands. In addition to passages from CS Lewis’ The Magician’s Nephew, and Tolkien’s Silmarillion, recent graduate Brielle Fowlkes read “The Creation” by African-American poet and civil rights activist James Weldon Johnson, a work that utilizes the African-American folklore tradition just as Tolkien used the tradition of Northern mythology and Lewis employed traditional children’s fantasy conventions.

Community Connected Through a Shared Appreciation

“Our goal is to accommodate more people in engaging the imagination in bringing together faith and learning. Everyone gets a chance to ask questions and participate,” said Ricke. That’s why we often end up talking until 6:30 even though the schedule says we are done at 5:00. We are filling a need, and we are glad to do it.”

Hartmann started going to the Lewis Center Teas after returning to campus from a semester studying abroad in Ireland. She’d heard about the teas in her emails from her friends and was eager to get involved after falling in love with Tolkien and Lewis in high school.

“I stayed involved because I loved the interesting scholarly discussions we had. I also discovered a community who loved the same books, authors, and ideas I did. It felt like home. Many of my best friendships are with those who also attended the Lewis teas during my time at Taylor,” Hartmann shared.

Join the Next Lewis Tea

The rest of this summer will feature some of the world’s leading Lewis scholars in a friendly and accessible format. To join the next remote Lewis tea, email the Lewis Center at cslewiscenter@taylor.edu and request to be added to the email mailing list. You’ll receive login information to join the Zoom meetings, which are held on Fridays at 4:00. Follow the Lewis Center on Facebook to stay informed on topics and upcoming events. And don’t forget the mug of steaming hot tea, preferably Twinings!