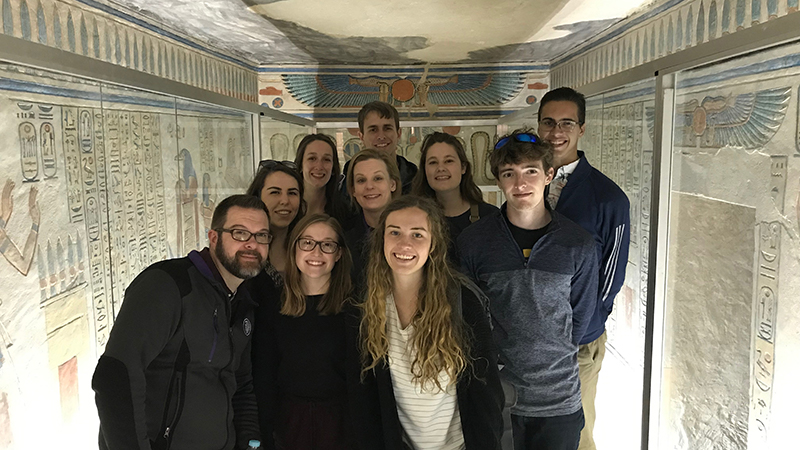 When Dr. Kevin Johnson came to Taylor a few years ago as a history professor specializing in ancient Egypt, he knew he wanted to take students to Egypt.

This January, Johnson, now Chair of the History, Global & Political Studies department, led a group of eight students to Egypt—the first J-term class to ever visit there. The group visited two cities—Cairo in northern Egypt and Luxor in southern Egypt—and focused on the ancient Egyptian civilization.

“[The class was] art, architecture, religion, even a little bit of language, to give [students] an intro into a holistic view of ancient Egypt and its culture,” Johnson said.

“The entire service was actually in Arabic, because they were local Egyptians that were a part of this church,” Johnson said. “It was an amazing experience, to just sort of sit and to hear the name of Christ being praised in Arabic, to see local Egyptians singing some hymns [that] were very familiar to them.”

The Egyptians were members of a small Franciscan Catholic church where Johnson and the Taylor group attended mass. The group visited on January 13, weeks after Christmas, and the small church in Luxor was still decorated with a tree, and lights were strung along the altar.

Some of the trip’s other highlights included a visit to the Great Pyramids, the Giza Plateau, and Saqqara, which is a massive necropolis that has royal burial sites. The group also toured Karnak, the largest temple in the world, and a number of old mosques in Cairo.

“Some of my favorite things were seeing the mummified pharaohs, where some are over 3,000 years old,” she said. “It is a mind blowing experience. Some even still have their hair and nails.”

The group was led by Muslim tour guides through the ancient religious grounds. One of the guides shared about her faith and how Islam impacts her life, specifically issues relating to being a Muslim female.

Being able to freely ask their Muslim guides about their religion had a big impact on the students, according to Johnson. “I don’t think a lot of them expected they would have access to ask questions regarding Islam and how that sort of affects people that are practicing that religion in Egypt,” he said.

Ward agreed, saying her trip was deeply impacted by the Muslim guides who were willing to answer her questions. “My experience would not have been the same had I not had the opportunity to develop a relationship with them,” she said.

The group saw a different side of Egyptian life by visiting the local village of the boat captain, who shuttled the group across the Nile every day to see ancient sites. The man showed the students around his village and invited them to have tea with him in his house.

Johnson recalled the moment when a group of excited local kids tagged along as the Taylor students walked through the village. “[The group of kids] started out like it was small in number and by the time we got halfway through their village, it had multiplied and they were like swarms all over the place—they were so excited to see us,” he said.

For the class, the students recorded each day in their journals, and a number of students wrote about how much they liked seeing an authentic Egyptian village, something tourists didn’t normally see.

“[The students] really enjoyed getting able to see ... how people live their lives and to see what a side of Egypt, that has nothing to do with tourism, looks like,” Johnson said.

Johnson is already planning another J-term trip back to Egypt next year. He is hoping to increase the number to 12 students, which is still a small group compared to other Taylor groups going on J-term trips. The smaller, more intimate group allows for better processing and reflecting, since that’s sometimes more difficult to do with a larger group, according to Johnson.

Traveling to an unconventional location like Egypt is more than simply sightseeing or trying new foods; it’s about using that experience to process how it impacts life here in the States.

“It’s not just about what people are able to see, but it’s also about how they’re able to think about those things and to think through what they saw [and] how it impacts us,” Johnson said.