Art Students and Alumni Create Mural for Nearby Town 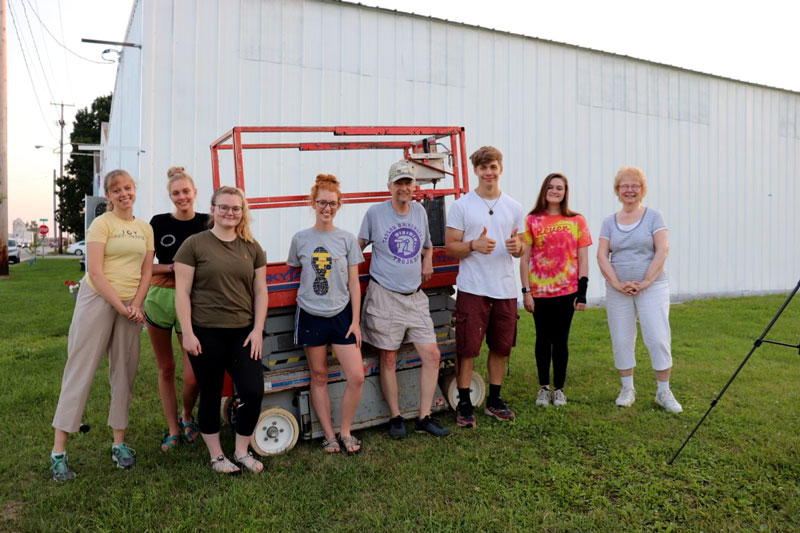 At Taylor University, Graphic Art majors get many opportunities to apply their skills in design, illustration, or photography as undergraduates. Whether in print or online, strong and effective visual communicators are always in demand. Alumna Abby Braswell ‘21 used her skills to bring life and color to Matthews, a small town a few miles away from Taylor.

From Gas City to Matthews

The 1,500-square foot mural in Matthews was a long time coming. Braswell had worked on her first mural in Gas City as part of a painting class with her professor, Art Department Co-Chair Laura Stevenson. Stevenson had approached local business Mama Pearson's Soaporium about painting a mural on the building. After developing the design all semester, Braswell, her classmates, and Stevenson painted the store’s outside 2-story wall during the summer of 2020.

The next year, Braswell was contacted by someone who had seen her work and wanted the same added color on a prominent wall on a building in Matthews. After planning for two months, developing the design, and going back and forth with the client, Braswell was ready to start the painting process. But she needed a team to help her complete the mural over the summer, so she contacted fellow art alumna Kate Turner ‘21 to help her finalize the design.

“I needed a little more help, direction, and a fresh set of creative eyes,” Braswell said. “I brought (Turner) on and she did the color, and she really, really helped me. (She) spent a lot of hours helping me do the placement of some objects and just really helped me finish up the final piece of the mural (design).”

During the course of creating the mural, Braswell received support from her parents and the Matthews community. Her dad helped with supplies and painting, and the community offered everything from moral support to hot meals. Gloria Slater, a town council member, got together with some members of the community to host a luncheon for Braswell and her team one Friday afternoon.

“We all got to eat lunch, and it was a nice break; we got to just laugh with each other and get to know the people outside of work,” Braswell said.

Also aiding Braswell in design and execution was senior Bailey Spiegel, a Studio Art major. He helped trace the design and color in the lines, using his experience from his art classes and his side business where he paints longboards. 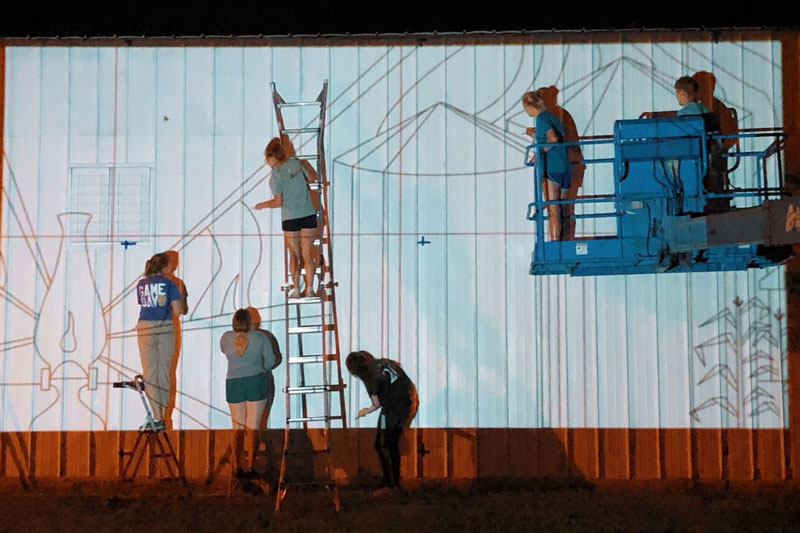 The mural also aided Spiegel in preparing for a future career in freelance work.

“I totally think (the mural) helped me with my classes and my career,” Spiegel said. “I saw a lot of examples of working with a client and with contracts.”

After over 200 hours of designing, planning, painting and spending long nights on site, the project was finally complete. Although she had thoroughly enjoyed the project, Braswell was ready to focus next on her own projects such as designing notebooks.

A Future in Art

Through painting the Matthews’ mural, Braswell gained practical experience working with clients and maintaining a strict schedule. It’s also helping her current career as an art teacher at Traders Point Christian Academy in Whitestown, Indiana. She loves inspiring the next generation of art students.

“I would really love to teach art and do projects with my students. Maybe we could do something like a small mural,” Braswell said. “I am very passionate about (hands-on art), and I want to be creative and open up opportunities for that.”

Prior to coming to Taylor, Braswell considered attending a large state university, but once she visited Taylor’s campus, she knew it would be her new home. After talking with art professors such as Jonathan Bouw, Braswell felt supported by his encouragement, and she felt more confident in her choice of Taylor.

“Taylor felt the most welcoming, homey and somewhere where I could just see myself fitting in,” Braswell said. “That’s kind of why I chose Taylor. I remember looking at all the art programs, and all the other schools weren't very personable. All the other schools wanted me to be there, and I just remember Professor Bouw being like, ‘Hey, I want you where God wants you to be.’”

For more about Taylor’s Art program and other hands-on experiences that art students have gained, check out the Art program page!