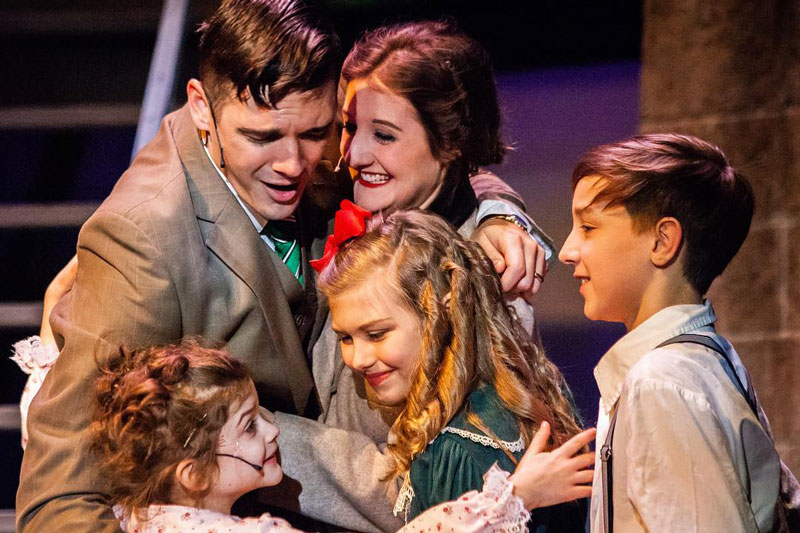 Students studying Theatre & Dance at Taylor experience both breadth and depth in their learning. With plenty of vocal and instrumental ensembles, theatre productions and study abroad options to help hone their talents, they take their God-given passions to new levels.

Leah Perry ‘16 studied Theatre Arts and was involved in 15 shows during her four years. This rich foundation led her to be a theatre director and teacher at her high school alma mater, Cincinnati Christian High School, after she graduated.

Perry was in fourth grade when the 2004 film version of The Phantom of the Opera was released. She reluctantly went to see it with her mother (she had her heart set on another movie), unaware the experience would redirect her life.

“I fell in love with musical theatre after seeing the film and had never been so moved by a story or a character before,” Perry said. “From that day on, I told everyone I would be an actress.”

At Taylor, Perry declared a theatre arts major and added a Professional Writing minor. Her Christian liberal arts education shaped her into a well-rounded performer and storyteller with versatile skills in front of and behind the curtain.

One project that particularly challenged Perry was when she directed a full-length play for the course Play Directing. Perry chose The Boys Next Door, and the process was unlike any theatrical endeavor she had ever experienced. She said it was more rewarding than any role she had ever portrayed onstage and it was a show that she will forever cherish.

“There was for sure a stretch of intense prep time as I directed The Boys Next Door,” Perry said. “However, that time and my entire four years of Taylor theatre prepared me for where I am today.”

While at Taylor, she designed and led hair and make-up for three years, stage managed an opera, was dance captain for a musical, and had major roles in productions. She took design classes and gained skills in painting, lighting, carpentry, and prop design. She studied dance and acting methods and also helped build the sets and take them down. Now, as the only teacher and director in her high school’s theatre department, it is her responsibility to make sure all the above are successfully accomplished for each show.

In addition to the skills Perry took away from Taylor’s immersive theatre program, she also said the people in the Taylor community impacted her and continue to inspire her today. She said her theatre peers created spaces for vulnerability, personal growth, and bold strength that she had not known before diving deep into art alongside them. Although they now live and work in many different states, she recalls their time on stage at Taylor fondly and said she considers many of the women she performed with dear sisters. Her director, mentor, friend and teacher, Assistant Professor Tracy Manning, especially left her mark.

“She helped me see our God in the world around me, in the faces on the street, and in the stories we hear from our aching world,” Perry said. “She not only taught me the bedrock of theatre, she taught me how to fill it with life. She is why I pursue meaningful art and hold high standards for what I engage with.”

Perry prepared to advance her career in acting and spend her life auditioning, rehearsing, performing, and filming during her senior year at Taylor. However, as graduation approached, she received a phone call from her high school theatre director who was seeking to retire. He asked her if she would like to intern with him for a year and then transition into his role at Cincinnati Christian High School. While Perry believes there are plenty of great career opportunities in the world of theatre outside of teaching it, she felt this opening was guidance from the Lord. She accepted the offer and completed her senior year with ease and peace.

In her role as a high school theatre teacher, Perry teaches two classes back-to-back at the end of the school day. The first is Technical Theatre, which consists of students who enjoy backstage work, such as set design and construction, painting, and building props. Then, she teaches Performance Theatre, which is a class devoted to inexperienced performers, enhancing their onstage presence, performance skills, monologue prep, and character development.

Perry’s advice to students seeking to study theatre is to embody servant-leadership by learning all these aspects of theatre. Lighting and sound, costuming, hair and makeup, carpentry—each moving part is essential and rewarding in their own unique way.

“As you prepare, train, and rehearse for the professional world of theatre, don’t miss the opportunity to learn all the other elements of theatre in an intimate way,” Perry said. “The art of stage performance is not just about the ones on the stage. It is very easy to be swept away in a self-centered mindset if one’s only goal is to be the lead in every show. Continue to train and practice the craft that best suits your sets of talents, but don’t deny the theatre or yourself of the chance to learn all areas of this beautiful field of art.”

After the school day, Perry leads the rehearsals for the fall play, winter play, and spring musical. This is usually a different group of students than who are in her classes and she enjoys seeing a full spectrum of theatrical students during the day. From stage makeup to set design, casting and directing, Perry does it all.

“At the end of the day, it all falls on my shoulders, and I would have had no foundation without Taylor University’s multi-dimensional theatre,” Perry said.

Perry has directed 11 productions since graduating from Taylor. Two years ago, she directed The Women of Lockerbie, which won “Best Play” in a Cincinnati high school theatre competition.

While this award was very special, the prize was not the biggest honor she felt they received. This show was the first production Perry’s students were a part of that did not have the primary goal of entertaining the audience, an undertaking that was both a challenge and a triumph.

“They had never done serious theatre before, and this is a gripping, dramatic show—it is a story of terrorism, heartbreak, grief, and denial,” Perry said. “I had to push and push my students to find levels of emotion they have yet to experience in their real lives. We had hours of conversation about coping with loss and death. They asked me, ‘Why is it okay to make the audience cry?’ This probed me to teach an alternative meaning of art they had never recognized as teenagers.”

Perry said she was able to navigate her students through this process because she walked through it herself at Taylor when they performed A Piece of My Heart. She credits her training and experiences at Taylor for her success in this endeavor and The Women of Lockerbie became her favorite production thus far.

Many of the stories Perry engages with, whether with her students or with her husband in community theater, challenge and stretch her faith. She said she is constantly inspired to seek the Lord in her artistic pursuits. She filters everything through Scripture and said theatre brings her closer to the Lord because it demands she stay in tune with His truth.

“The quality of art I made in college and the quality I strive for with my students can only be explained by my faith,” Perry said. “The Lord calls us to excellence in all areas and we are asked to present our gifts to Him. I worship Him through my art because He was the first storyteller. I honor Him by retelling stories He already told. I honor Him by portraying themes of redemption, forgiveness, reconciliation and love in a broken and angry world.”