Working to Close the Education Gap 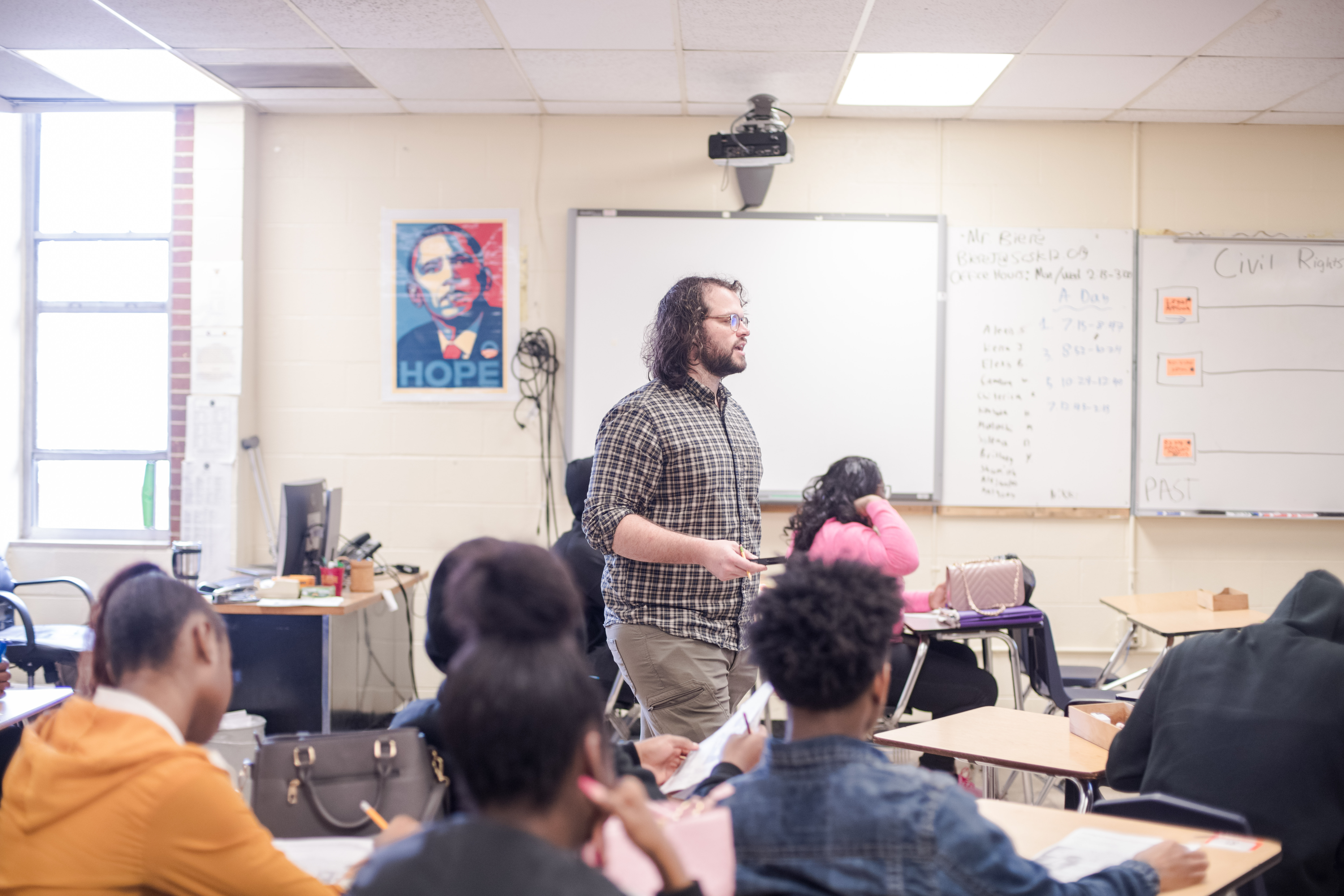 Joel Biere ‘16 thought about pursuing a career in teaching but he also wanted to explore other options. That’s why he, like 20% of other Taylor freshmen, entered college as pre-major, or undeclared, to test the waters.

Students in the pre-major program are able to take their time narrowing down their interests because they are not required to declare a major until their junior year. In the meantime, they sample a variety of disciplines to prepare for a diverse range of career opportunities through Taylor’s liberal arts curriculum.

Through Taylor's pre-major program, Biere soon discovered his passion for Social Studies Education, a career path that would eventually bring him to earn a master’s degree in Urban Education through the competitive Memphis Teacher Residency program post-graduation.

Immersed in Classrooms Local and Abroad

Taylor’s Education program seeks to develop competent, caring, and reflective teachers who are excited about their calling and prepared for world service. Taking education classes in a liberal arts context like Taylor allowed Biere to experience interdisciplinary perspectives, which helped him become a well-rounded educator.

Biere’s interest in History was sparked by one of his favorite Taylor professors at the time, Dr. Steve Messer. After taking classes in U.S. history and African American history with Messer, Biere realized he personally did not receive a very in-depth history education during high school. He fell in love with the complexity and nuance of the field and decided that becoming a teacher would combine this passion with his enthusiasm for mentorship.

“My drive to teach history is only partly about the content I’m teaching, maybe 75 percent,” Biere said. “It’s also about building relationships with young people who are trying to figure out life, developing young minds through history content, and more importantly, learning how to think.”

During his time at Taylor, Biere put these skills to practice in real classrooms starting his freshman year. Since Taylor education students teach at two different schools and grade levels during their senior year, Biere also gained experience at both a public school in Marion, Indiana, and abroad at an American expatriate school in Yaoundé, Cameroon.

In Marion, Biere faced the challenges of curriculum development and classroom management. He got a taste of how difficult teaching can be, which was a wake-up call and growing experience for him.

In Yaoundé, teaching in an American expatriate school meant Biere was teaching some of the wealthiest kids in the region—kids whose parents worked as diplomats, at the World Bank, or in the U.S. military. While he was grateful for the opportunity to teach abroad, it hurt him to pass by so many other children living in poverty as he traveled to the school each day.

That time in Cameroon confirmed a calling Biere felt stirring in his heart for some time: he wanted to teach in schools with greater need, as he knew wealthy populations had greater educational advantages. If he truly believed in the power of education for personal and economic development, he thought, then he wanted to target his efforts toward kids who may not have the same opportunities.

Armed with this perspective and a wealth of experience under his belt, Biere then set his sights towards the future.

Biere was concerned to learn that on average, students in lower-income neighborhoods often struggle to get scores that meet the ACT and SAT college readiness benchmarks. If these students had been born in a wealthier ZIP code nearby, according to a visualization tool called EdGap.org, their average scores could have gotten them into hundreds of colleges across the U.S..

Biere wanted to play a small part in closing this gap. So when David Montague—the director of the Memphis Teacher Residency (MTR) program—came to recruit at Taylor, Biere was sure to pay attention to his pitch.

MTR seeks to help close the education gap by training excellent teachers equipped for under-resourced communities around Memphis, Tennessee. Biere was especially drawn to MTR’s view that educational inequality is one of the greatest social justice and civil rights issues in America today, and that they seek to combat this injustice because of their Christian values.

Biere applied to enter this competitive program and was accepted, which began his three-year journey of continued learning, mentorship, and urban classroom experience. The end of his journey with MTR resulted in him earning a Master’s degree in Urban Education, which has taught him to take an asset-minded approach in his teaching.

“It’s easy for some people to talk negatively about kids in poverty since they’re carrying all sorts of stuff and don’t always have good relationships,” Biere said. “But being asset-minded instead asks, ‘What does this kid bring to the table?’ It’s about finding their strengths and wondering how I can fan that flame.”

“That kind of stuff gets me excited,” Biere said. “Ultimately, I can’t teach the gospel to kids in a public school, but what I can do is give them the asset of exercising their ability to discern and think. History is really cool and I definitely wouldn’t want to teach any other content area.”

Biere said teaching in an economically disadvantaged public high school is no easy task. The difficulties of classroom management, maintaining good parent relations, and teaching in a school with poor test scores are significant obstacles that teachers in other settings do not experience to the same extent.

When facing feelings of inadequacy when standing at the door of his classroom each day, he leans on Christ and relies on Him to give him strength.

“The love and the joy of teaching comes from seeing the Lord show up in the classroom,” Biere said. “These kids have a lot to teach me; when they say something profound I love that.”

Coming to Taylor was instrumental in Biere’s journey toward teaching in an urban setting. He also recalls how being a Personnel Assistant (PA) on his floor in Samuel Morris helped him grow in his leadership skills. He now tries to carry and build the principles of Christian community with him wherever he goes.

“Taylor gave me a long-lasting and amazing community. It’s unique to see that community extending beyond,” Biere said. “Because of this expectation of what community looks like, it’s been easier to be intentional about that here in Memphis.”

Looking back, Biere is especially grateful for the education department’s emphasis on real classroom experience. He is thankful for the way his senior year student teaching placements shaped his trajectory toward the MTR program and encourages incoming education students to make the most of this time.

“Take advantage of the student teaching year—don’t be afraid to do stuff that’s not comfortable because teaching is not comfortable,” Biere said. “Don’t just dip your toes in the pool, but dive in.”

Taylor’s Education program seeks to equip students to teach in a variety of contexts. To expose students to the numerous paths they can take education degrees, they are introduced to Montessori schools, public and private schools, and schools in urban settings.