Tuning in to Real-World Experience 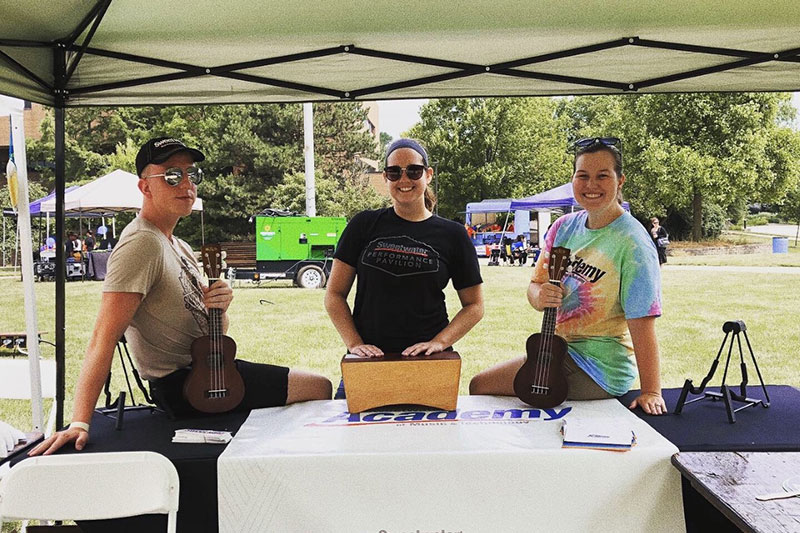 Junior Music Education and Special Education major Moorea Reiskytl hopes to be a band director or music teacher one day. Her internship at Sweetwater Sound, a music technology and instrument retailer, helped her practice the administrative side of a career in music and gain valuable skills to equip her for a classroom of her own.

During the summers, Sweetwater conducts music camps. Moorea supported Sweetwater’s assistant director in organizing information about students attending their music camps, helped set up and tear down equipment, answered guests’ questions about music lessons, and ran the front desk at the Academy of Music to be available for the students.

Moorea found the customer service aspect of her internship to be a growing experience as she interacted with campers and made connections with people working in the music education industry.

“Taylor has prepared me through the standard of excellence that is always expected,” Moorea said. “In my classes, we are always encouraged to go above and beyond—not just to get a good grade but to prepare for our futures. This has helped me immensely in keeping up with the pace at Sweetwater. The culture of servant-leadership instilled in me at Taylor has helped me excel at the ‘people part’ of my job!”

Leaving on a Happy Note

Going into her internship, Moorea was well-versed in concert band and marching band, but had a lot to learn about rock music, guitars, amps, and cables. Now, she feels like a more well-rounded educator and believes she can be a better resource to her students in the future.

During her time at Sweetwater, she received plenty of praise for her hard work, and was even approached by one of her campers interested in a career similar to her own goals.

“The camper was telling me how much fun he had at camp, and then started asking me about my internship,” Moorea said. “He said that he loved Sweetwater and wanted to apply for the same internship next summer since he just graduated! Interacting with the rock camp kids encourages me when I think about my dream of teaching high school band someday—they are amazing kids who will have music in their life in an awesome way.”

In addition to being inspired by the talented students she met, Moorea believes God gave her a glimpse of what her future in music could look like through this internship. She is grateful for all the ways she was stretched as a both musician and future teacher.

“God definitely put certain people at Sweetwater in my life this summer for a reason,” Moorea said. “There have been many good relationships cultivated, and a lot of awesome conversations because of that. God used these people to pour into me all summer and lift me up in different ways. I am so thankful for this experience.”