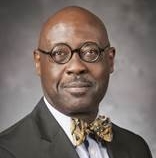 Jennings’ visit is being hosted by the Taylor Honors Guild.

He will be the featured speaker during chapel services at 10 am, that day. He will also spend time with faculty and students in selected settings throughout the day.

Jennings is an ordained Baptist minister and has served as interim pastor for several North Carolina churches. He is in high demand as a speaker and is widely recognized as a major figure in theological education across North America. He holds degrees from Calvin College, Fuller Theological Seminary (MDiv), and Duke (PhD).

Writing in the areas of liberation theologies, cultural identities, and anthropology, Jennings has authored more than 40 scholarly essays and nearly two-dozen reviews, as well as essays on academic administration and blog posts for Religion Dispatches.

His book The Christian Imagination: Theology and the Origins of Race (Yale 2010) won the American Academy of Religion Award of Excellence in the Study of Religion in the Constructive-Reflective category the year after it appeared and, in 2015, the Grawemeyer Award in Religion, the largest prize for a theological work in North America. Englewood Review of Books called the work a “theological masterpiece.”

"Dr. Willie Jennings is one of the foremost theological thinkers in a generation. His work on theology and race has set the benchmark for critical inquiry into race and Christian identity,” said Dr. Andrew Draper, Assistant Professor of Theology and Director of the Honors Guild at Taylor. “Dr. Jennings speaks from a confessional Christian perspective and draws from the best in contemporary cultural studies and critical race theory. For Taylor to host Dr. Jennings testifies to the University's quality engagement with contemporary social issues and theological thought. Taylor faculty, staff, and students benefit from hosting Dr. Jennings as they think through what is at stake in the formation of a diverse Christian community. The Taylor Honors Guild seeks to host a diverse array of scholars at the top of their respective fields and is proud to partner with the Staley Visiting Scholar Series in welcoming Dr. Jennings to campus."