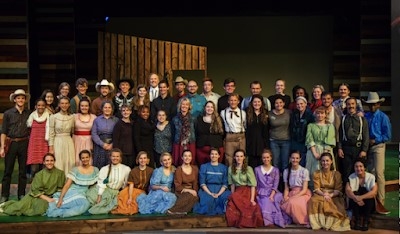 Taylor University’s Theatre and Lyric Theatre has achieved Third Place in The American Prize in Musical Theater Performance competition, 2017-18, for Oklahoma! a musical by Rodgers and Hammerstein.

Taylor’s entry, directed by Tracy Manning, Assistant Professor of Theatre Arts, Dept. Co-Chair, Managing and Artistic Director of Theatre, was selected from applications reviewed recently from all across the United States.

According to officials from The American Prize: The American Prize National Nonprofit Competitions in the Performing Arts grew from the belief that a great deal of excellent music being made in this country goes unrecognized and unheralded, not only in our major cities, but all across the country: in schools and churches, in colleges and universities, and by community and professional musicians. With the performing arts in America marginalized like never before, The American Prize seeks to fill the gap that leaves excellent artists and ensembles struggling for visibility and viability. The American Prize recognizes and rewards the best America produces, without bias against small city versus large, or unknown artist versus well-known.

David Katz is the chief judge of The American Prize. Professional conductor, award-winning composer, playwright, actor and arts advocate, he is author of Muse of Fire, the one-man play about the art of conducting. Joining Katz in selecting winners of The American Prize is a panel of judges with varied backgrounds and experience including professional vocalists, conductors, composers and pianists, tenured professors, and orchestra, band and choral musicians from around the United States.

“Most artists may never win a Grammy award, or a Pulitzer, or a Tony, or perhaps ever even be nominated,” Katz said, “but that does not mean that they are not worthy of recognition and reward. Quality in the arts is not limited to the coasts, or to the familiar names, or only to graduates of a few schools. It is on view all over the United States, if you take the time to look for it. The American Prize exists to encourage and herald that excellence … If The American Prize helps build careers, or contributes to local pride, or assists with increasing the audience for an artist or ensemble, builds the donor base, or stimulates opportunities or recruitment for winning artists and ensembles, then we have fulfilled our mission.”

“We are grateful that the American Prize has recognized the quality of Taylor University Theatre’s production of Oklahoma!” said Dr. Conor Angell, Associate Professor of Music, Lyric Theatre and Voice. “It affirms the level of training taking place in the Department of Music, Theatre, and Dance.”

About Taylor Theatre and Lyric Theatre: Taylor University Theatre and Taylor University Lyric Theatre are award-winning programs that collaborate annually to produce operas and musicals. These programs push students to artistic excellence as singers, dancers, actors, directors, set designers, stage managers, and scriptwriters. The Lyric Theatre program supports the liberal arts mission of Taylor University by providing a broad range of performance experiences that span historic and contemporary operatic and music theatre periods, genres, and styles.  Lyric Theatre is open to all students by audition.  Performances include fully-staged productions and semi-staged “scenes” productions. The primary goal of the ensemble is to create live performances in which students demonstrate dramatic confidence, vocal ease, and aesthetic sensibility. Recent productions have included Gianni Schicchi, Working, The Marriage of Figaro, I Love a Piano, Oklahoma!, Amahl and the Night Visitors, I Love a Piano, Kiss Me Kate, Dido and Aeneas.