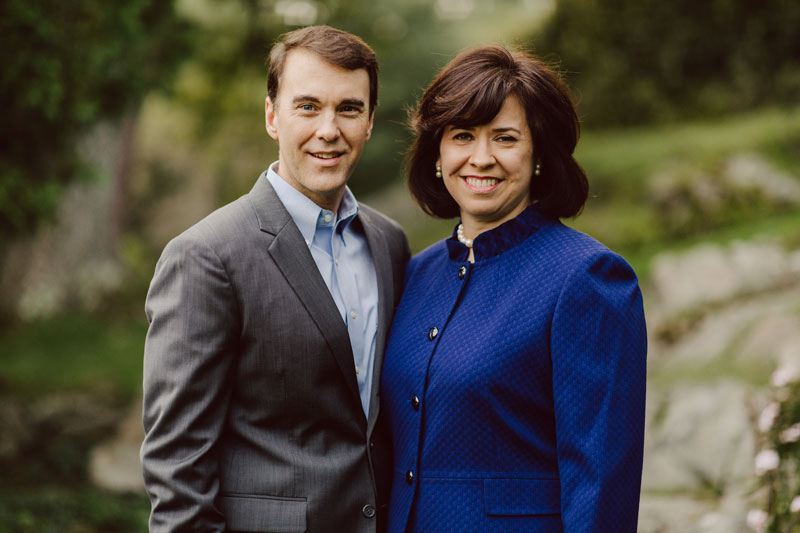 UPLAND, Ind., March 16, 2021—The Taylor University Board of Trustees today announced the election of D. Michael Lindsay, Ph.D., as its next President. The appointment comes after a rigorous, competitive and international search led by the University’s Presidential Search Committee.

“Dr. Lindsay is a gifted individual of deep personal faith and proven servant leadership. He excels in areas of innovation and creative adaptation, and he is uniquely qualified to lead the University forward with humility, wisdom and courage,” said Chris Goeglein, M.B.A., Board Chair and Search Committee Co-Chair. “A respected Christian leader, Dr. Lindsay has a broad understanding of the complexities facing Christian higher education. His spiritual and intellectual development in cultivating and discipling the next generation of servant leaders is truly a calling.”

In response to his appointment, Dr. Lindsay commented that he and his wife Rebecca look forward with great anticipation to being a part of Taylor’s vibrant campus community. “Taylor is one of the world’s foremost Christian institutions, and I thank God for the wisdom, strength and faithfulness that have characterized the School’s leadership for decades,” he said. “We are humbled to be called by God and honored by the Board’s selection to serve the University, advance its distinctive mission in providing excellent, Christ-centered higher education and strengthen its promising prospects for future growth and development.”

“In addition to seeking an individual with a personal, growing and contagious walk with the Lord, the Search Committee also sought candidates with the ability to articulate a compelling vision for Taylor consistent with its mission,” said Manuel Rosado, Board Vice-Chair and Search Committee Co-Chair. “We listened with love and attention to the Taylor community before embarking on this journey. Throughout the process, our committee emphasized spiritual discernment and prayer, and it was clear that those who love Taylor were prayerfully supporting this important effort.”

Dr. Lindsay was the unanimous selection of the Presidential Search Committee, and he was elected unanimously by the Board of Trustees. He will enter the Office of the President on Aug. 16, 2021, assuming the role from previous Taylor Board Chair Paige Comstock Cunningham, Ph.D., J.D., who has served as Interim President of the University since Aug. 15, 2019.

“The Taylor University Board, faculty and campus community are extremely grateful to Dr. Cunningham for her outstanding leadership, steady governance and faithful commitment to fulfilling the vision of the University,” said Goeglein. “Not only have the Institution’s foundational positions and policies been strengthened during her tenure, but she provided stability in a critical time with the COVID pandemic. All of us will be forever grateful for her exceptional and sacrificial service to our alma mater.”

As Dr. Lindsay steps into this role, his extensive experience and strong track record of success meets all the desired requirements for the next Taylor University president. A scholar, public intellectual, author and advocate for Christian orthodoxy, he has conducted far-reaching studies on leadership and the role of evangelical Christianity in American culture. Lindsay is also a visionary who excels in strategic planning and in marshalling resources and people to bring those plans to completion.

Since 2011, Dr. Lindsay has served as president of Gordon College in Wenham, Massachusetts. He previously announced his intention to step down as Gordon’s president effective June 30, 2021. Under his leadership, the school experienced record years of opportunity and growth, representing banner results in terms of fundraising and endowment growth; campus diversity, academic and student program development; sponsored research; athletic success; student satisfaction; and faith expression on campus. Gordon recently ended its best fiscal year ever and this spring is completing the school’s most ambitious and successful fundraising campaign to-date, including the largest gift ever given to a Christian college.

Prior to arriving at Gordon, Dr. Lindsay was a member of the sociology faculty at Rice University, where he won multiple awards both for his teaching and academic research. He is the author of two dozen scholarly publications and numerous books, including Faith in the Halls of Power, which was nominated for the nonfiction Pulitzer Prize in 2007, and his award-winning View from the Top, which has been translated into Chinese and Japanese. His forthcoming book, Hinge Moments, will release April 27, 2021, with InterVarsity Press.

Dr. Lindsay has been married for 25 years to Rebecca, an accomplished teacher and speaker who will serve as Taylor’s Ambassador for the University. They are the proud parents of three daughters, Elizabeth (17), Caroline (10) and Emily (10).

“The Taylor University Board of Trustees enthusiastically welcomes Dr. Lindsay, Rebecca and their three daughters to our campus community,” Rosado added. “We look forward to working together to facilitate his entrepreneurial vision of leading, empowering and equipping a thriving team to move creatively and strategically into the future.”

For additional information regarding Dr. Lindsay and Taylor, visit www.taylor.edu/about/president/.

Since its founding in 1846, Taylor University has become one of the nation’s premier evangelical independent, non-denominational Christian liberal arts institutions, including being ranked 12 times as the No. 1 Midwest regional college by U.S. News and World Report. Offering 120 undergraduate and graduate degree programs, as well as many opportunities for study and service abroad, Taylor’s enrollment is diverse, with students from over 40 states and more than 30 countries.

The Board of Trustees is dedicated to the historic, orthodox Christian faith affirmed in the University’s Foundational Documents, including the Statement of Faith, and embraced and embodied in the Taylor University community and educational experience, and will continue to passionately pursue Taylor’s unique position in Christian higher education. For more information, visit Taylor.edu. 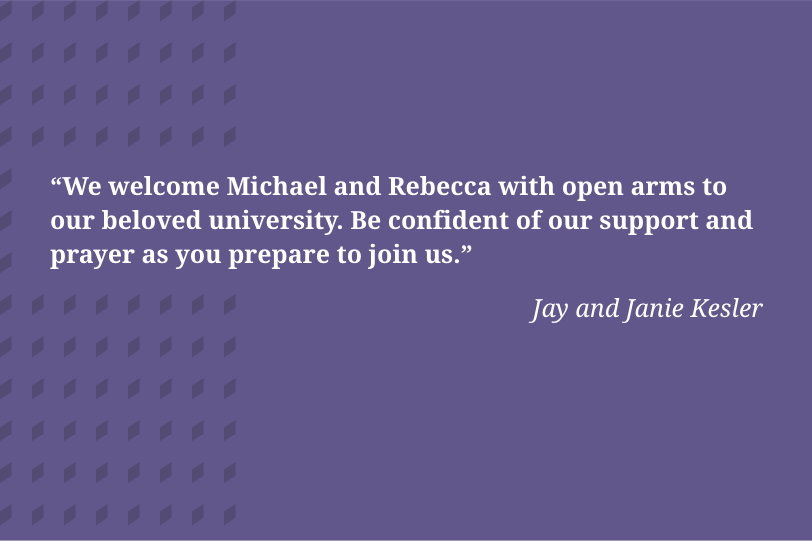 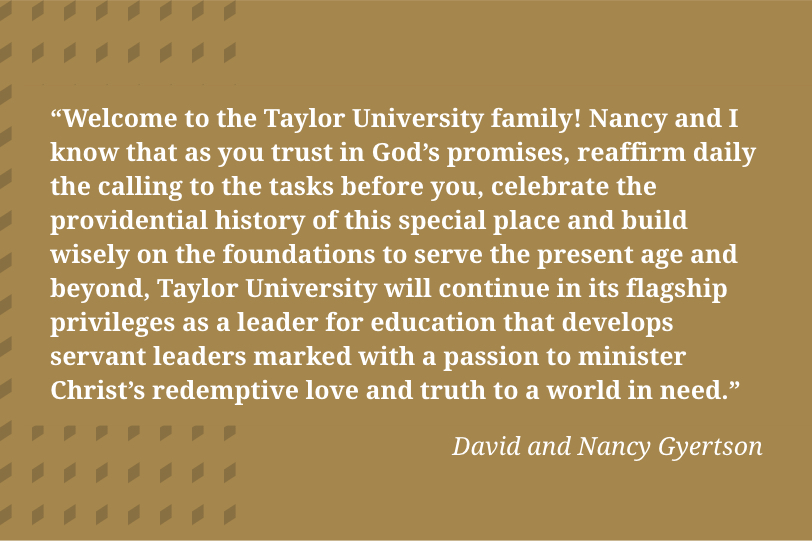 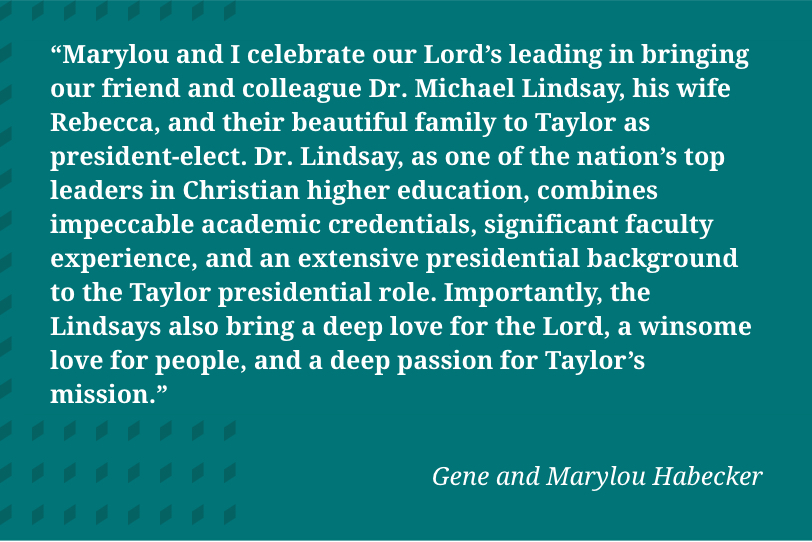 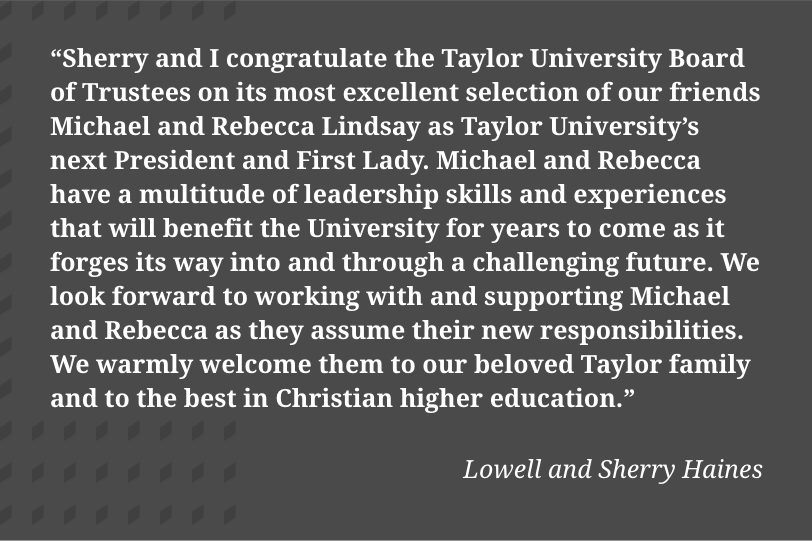 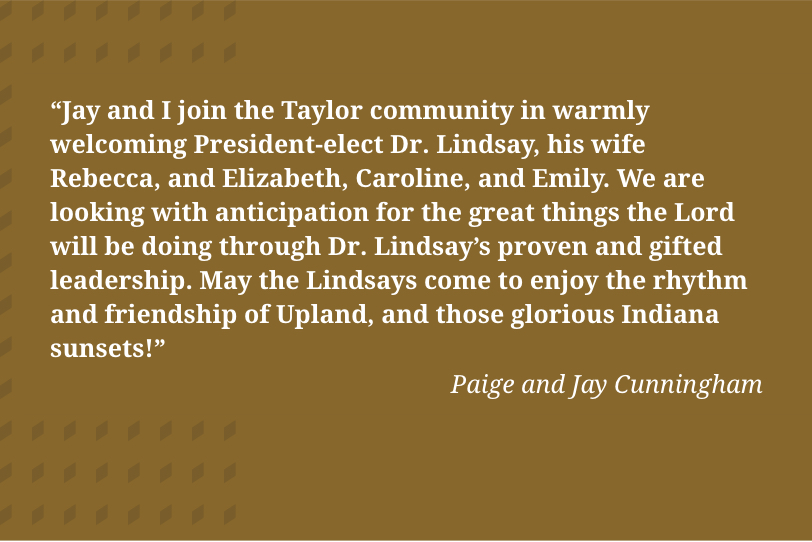