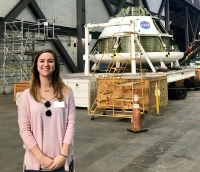 She was selected from a field of more than 100 applicants for the 16-week position with the National Aeronautics and Space Administration (NASA).

In her internship role, Moore incorporates math lessons into existing NASA curricula, creates demonstrations of what NASA’s robots on Mars can do, and teaches classes at the visitor’s center.

She also helps judge student engineering and math competitions and travels to conferences to teach about STEM subjects and present about current and past NASA missions.

Though NASA is primarily engineering-based, Moore said it is an opportunity to spread awareness about the importance math plays in the industry.

“It is rare to find a mathematician on Center among the thousands of engineers,” she said. “But one of the building blocks of engineering is mathematics. I have taken it upon myself to never let people forget that.”

Moore says her selection for this position is largely due to the influence of her Taylor professors.

“If it weren’t for my professors at Taylor, I highly doubt I would’ve gotten this internship,” she said, adding the skills she has developed at Taylor—educating different audiences, public speaking, and mathematics—are proving valuable in her internship.

Moore said she hopes to return to NASA on a permanent basis after graduate school.