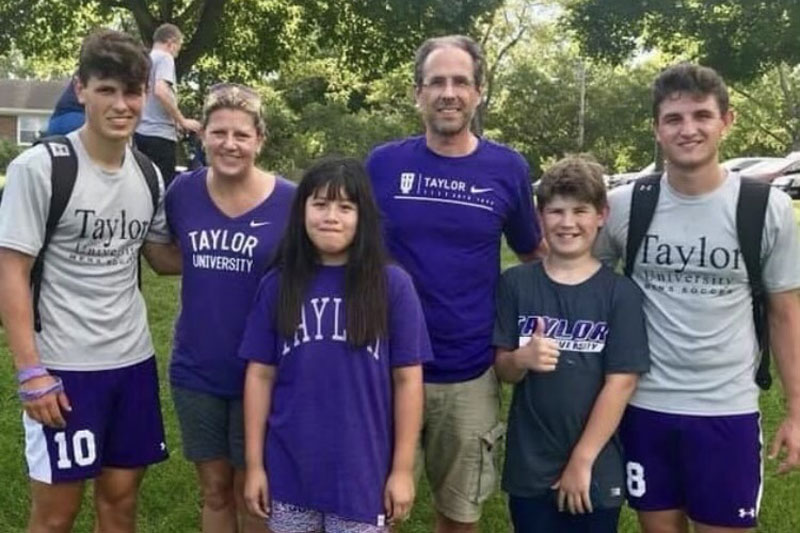 Taylor strives to create an environment where students are involved, engaged, and passionate about their experience in a way that extends well past their time on campus.

For alumni Andrew and Laurie McNeil (‘92), Taylor has been an important part of their story both as students and now as parents.

Laurie McNeil arrived at Taylor in the fall of 1988 to pursue a degree in Elementary Education and to run cross country. Originally interested in attending another school, she talked to the cross country coach who pointed her to Taylor after she said that building a relationship with Christ was a priority to her.

“I started digging into the Bible,” Laurie said. “Taylor gave me that excitement in my walk with Christ so that when I left Taylor, I continued to explore that.”

Andrew McNeil spent a semester at a large state school before realizing that was not the environment that he wanted in a college. He took a year off to bike across the country before transferring to Taylor as a History major in the spring of 1989. After graduation, he attended law school at the University of Michigan (Ann Arbor).

“I came to Taylor with a real interest in expanding my foundation in the Bible,” Andrew said. “Taylor prepared me pretty well intellectually to compete and hold my own against students who had gone to Ivy League schools. I was a little intimidated at first, but I realized I was as capable as they were.”

After Andrew graduated from law school, the couple settled in Indianapolis where they raised their four children.

Andrew and Laurie’s oldest sons are also recent graduates of Taylor. Like their parents, both men were initially uncertain about applying to Taylor. God had other plans.

Originally attending another university, much like his father, Ethan McNeil didn’t feel like it was a good fit. After some prompting from his parents, he transferred to Taylor and hasn’t looked back. He graduated from Taylor in 2020 as a History major and is now a member of Taylor’s Master of Arts in Higher Education (MAHE) 2021 cohort.

For Jack McNeil, recent Finance major graduate, the fact that his parents were alumni was a reason to not want to attend Taylor, even going so far as to commit to playing soccer at another school.

“I knew I had to switch my decision because something just didn’t feel right,” Jack said.

It was an unexpected song lyric that convinced Jack that Taylor was right for him. In the fall of 2017, Jack arrived on campus to find that he was not only living in the same residence hall as Ethan, but just down the hall from his brother, one more wink from God to reassure his decision.

Jack and Ethan both graduated from Covenant Christian High School in Indianapolis which, much like Taylor, is dedicated to providing their students with a strong education and fostering a dedication to Christ. The transition from Covenant to Taylor made sense. Jack recalled a few classes from Covenant that covered similar material to some of Taylor’s foundational courses which prepared him well for the college level.

For Jack, attending the same school as his family has made explaining certain traditions and Taylor catchphrases easier, as they are already familiar with them.

“The best part of this is just that they are passionate about the mission of the University,” Jack said. “I don’t have to explain ‘intentional community’ to them.”

Andrew echoed his sentiments, praising Taylor’s ability to stay committed to its foundation and beliefs, even through leadership changes, budget cuts, and the pandemic. Having a parents’ perspective of Taylor has only strengthened the McNeil's appreciation for the institution and the work it does in the lives of its students.

Watching their sons be a part of Taylor has been a joy for Andrew and Laurie. Returning to campus for soccer games, Airband, and commencement, Andrew and Laurie still sense the community that drew them to Taylor and are grateful for the way it embraces their sons even now.

Andrew and Laurie have two younger children still currently attending Covenant, one of whom already has his sights set on being a Taylor student.