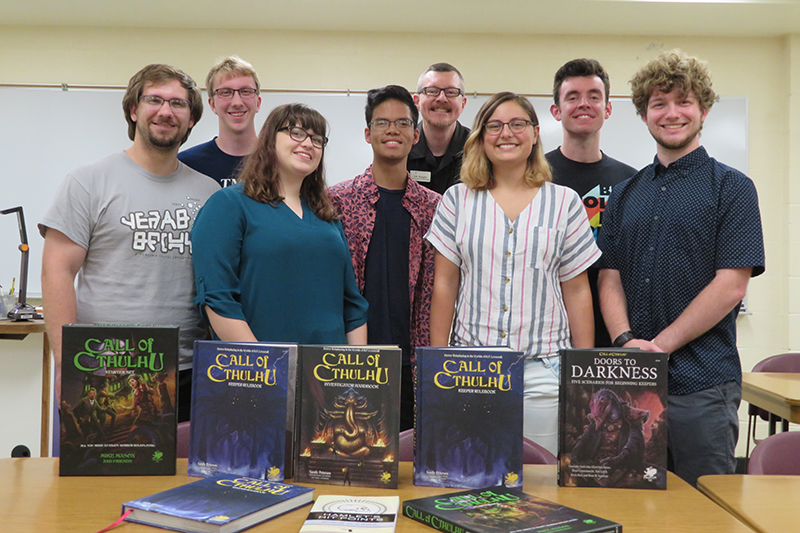 Many writers dream of becoming award-winning authors. Thanks to a recent class at Taylor, that dream became a reality for one group of students before even graduating college.

Writing as a Career

The Professional Writing major has always emphasized gaining experience in the field. Students are encouraged to try everything from writing articles to proofreading manuscripts in order to get hands-on experience. Most freshmen are published within their first semester and all students graduate with robust portfolios.

Professional writing majors are required to take classes such as editing and freelance writing, but they also have the opportunity to take more specific courses through the different writing seminars the major offers.

Writing and Editing for Gaming

In 2017, the Professional Writing department debuted a new class: Writing and Editing for Gaming. This class served as an introduction to the role-playing game (RPG) and board game community, where students could learn about the various roles involved in publishing a game.

The course was taught by Director of Academic Technology and User Services T.R. Knight, who has over six years of experience as a freelance editor in the tabletop game industry. Over the course of the semester, various guest speakers and projects gave students a taste of the world of games, including editing real examples of published rulebooks. The class was a resounding success.

“I had a freshman from that first class and numerous students from the second class approach me and talk to their department chair, requesting I teach a follow-up course that was more focused on publishing an RPG book,” Knight said. “They really wanted to experience the full process from beginning to end of publishing.”

With that in mind, Knight contacted companies for students to work with. Chaosium, a game publisher, expressed interest, and a partnership was born.

A Different Type of Storytelling

In fall 2019, seven students signed up for Tabletop Game Writing Lab. They drew from what they learned in the prior class to brainstorm, write, edit, and lay out an RPG scenario of their own. Knight once again taught the class, and he invited Mike Mason, Chaosium’s creative director, and Lynne Hardy, Chaosium’s associate editor, to provide feedback and guidance.

Through collaboration with Chaosium, the class created a scenario set within Call of Cthulhu, Chaosium’s main game line. The students decided to add their own personal touch to the story by setting it in Indiana. They met in and out of class to discuss plot, characters, and everything in between.

“We were all new to the medium,” said Rayce Patterson, a member of the class. “Writing RPGs is very different from writing a book because instead of saying ‘here’s the story, read it,’ we’re saying, ‘here are the story elements, put it together however you like.’ It’s like giving a kid Legos without the instruction book.”

Bringing Their World to Life

With the plot planned out, the students began crafting the actual story. Due to the variety of skills required for this project, most found themselves drawing from what they had learned in other classes.

“I primarily utilized skills I learned in Writing and Editing for Gaming and Professor Linda Taylor's Editing class,” said Elijah Oates, another student from the class. “Both gave me a good grasp on structure, succinctness, and the best way to portray a creative product.”

As they worked, Mike Mason and Lynne Hardy provided feedback based on their own extensive experience with the game. They offered advice on the plot, read through the students’ work, and promoted the project to their own circles.

The students also edited each other’s work, which helped them find conflicting plot points and unify their writing voice. Each student took charge of a different aspect of the project, including compiling the written sections into one cohesive document, making sure there was enough art, and laying it all out in InDesign.

Within one semester, this group of seven students completed a project that often takes larger groups far longer to finish. They uploaded their completed project, dubbed Refractions of Glasston, through Miskatonic Repository, an online collection of user-made resources for Call of Cthulhu, and waited to see how it would be received.

Competing with the Pros

Within just a little over a week, over 1,000 people had downloaded the game. Players and professionals alike left reviews and posted their thoughts about it. This was the first time a class like this had ever tackled such a project, and many were curious to see the final result.

Inspired by the positive feedback, Knight submitted Refractions of Glasston to compete in the ENNIES, the biggest award show event for tabletop roleplaying games in the industry. Major publishers and independent writers alike submit work to win fans’ votes for categories like Best Adventure, Best Art, and Best Rules.

On July 31, it was announced that Refractions of Glasston won a Judge’s Spotlight award. Out of hundreds of entries, it was one of five games to receive special recognition thanks to its quality and unique creative team.

“I was blown away that we were even considered for the ENNIES,” Oates said. “It's so weird to think I'm an award-winning author now. Hearing Professor Knight talk about how this never had been done before made us feel like we had something special, but to be recognized in a massive award show was just crazy.”

A Future for Games

With this major achievement under its belt, the Professional Writing program is looking toward the future.

“This award was extra special as it reflected well on this first time ever teaching this course, showing the potential for college students to be involved in the game industry academically and professionally,” Knight said. He is already in contact with other game companies, and plans on teaching the class again.

For students who plan on pursuing careers involving games, the award provided an opening into the industry. Even those who had no plans on continuing to write games saw it as a good lesson in teamwork and the benefits of collaboration.

“I’d love for this class to happen again, even if I can’t be a part of it,” Patterson said. “I think the opportunity is so cool and if anybody is interested in RPGs and tabletop games then it’s not really something you should pass up.”