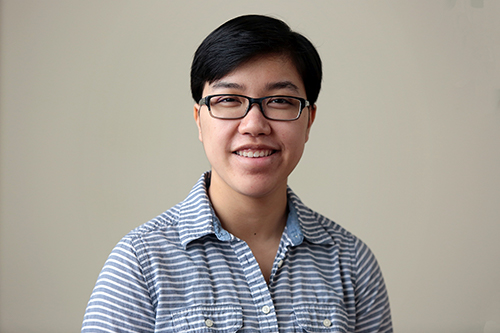 Upland, Indiana—Taylor University student Erica Mitchell has been selected as a presenter at the 257th National Meeting of the American Chemical Society (ACS) in Orlando, Florida, March 31-April 1.

Mitchell, a junior majoring in chemistry and minoring in physics and mathematics, will present findings from her computational chemistry research project, which was conducted under the guidance of Dr. Brandon Magers, Associate Professor of Chemistry at Taylor University. She will also accept an award on behalf of the American Chemical Society Student Chapter of Taylor University. This student chapter, sponsored by Magers, is an officially recognized university chapter of the ACS and has received a Commendable Award (the ACS’ second highest honor) for their work during the 2017-2018 academic year.

“From my freshman year, I was unsure as to what I wanted to do with chemistry, believing the only jobs were laboratory technician or professor,” Mitchell said. “My academic advisor, Dr. Magers, is a computational chemist and, due to my interest in physics, at the end of freshman year he told me to start thinking about doing research with him for the upcoming academic year since I need research to fulfill my degree requirements.”

“The research I have done has prepared me for work beyond Taylor University by giving me experience,” added Mitchell, who also was able to participate in a research for undergraduates project at the University of Mississippi. “Experience is what many graduate programs are looking for now and since my work is also likely to be published, that even further pushes me ahead … The culmination of my combined research and achievements at both Taylor University and the University of Mississippi puts me ahead and makes me stand out among thousands of applicants.”

According to its website (acs.org), the American Chemical Society was founded in 1876 and chartered by the U.S. Congress. It is the world’s largest scientific society, and its mission is to advance the broader chemistry enterprise and its practitioners for the benefit of Earth and its people.

More than 12,000 college students and professors from throughout the United States are expected to attend. Mitchell’s trip to the conference is being funded in part by a Spring 2019 Eli Lilly Travel Award, which also allows her to attend a number of special events at the conference as well as a luncheon during which she will be recognized.