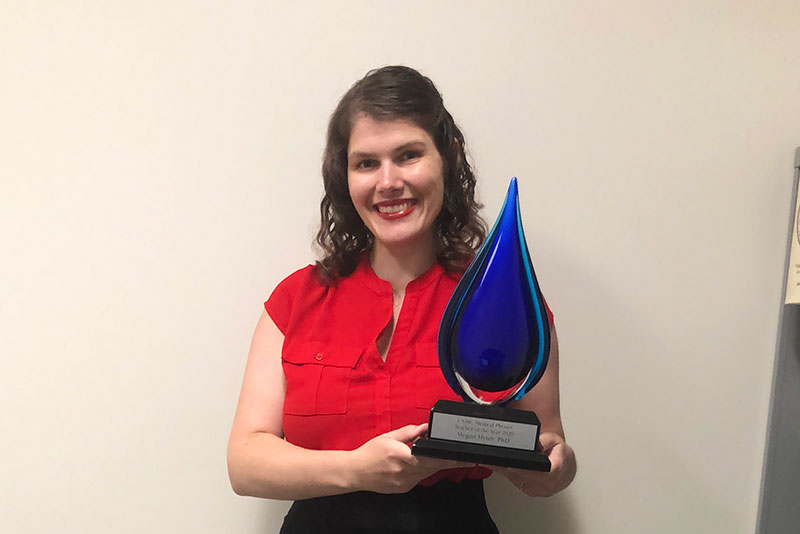 Taylor alumna and medical physicist Megan Hyun ‘10 was commended by her department at University of Nebraska Medical Center (UNMC) in July 2020 with the Medical Physics Teacher of the Year award.

The award was the first of its kind, designed to recognize faculty achievement and excellence in teaching and mentorship.

Hyun’s time at Taylor was instrumental in her choice to become a professional who cares deeply about her patients and students, and it all started when she first stepped onto campus as a conflicted freshman.

When Hyun was 17, she told her father she wished she could “do math and heal people at the same time.” She dreamed of going to medical school and planned to major in Biology at Taylor, even though deep down she was disappointed she might neglect her love for mathematics in the process.

She continued to wrestle with how she could combine her two passions up until she arrived on campus for freshman orientation.

That day, Hyun’s randomly assigned roommate introduced her to her dad: professor and co-chair of the Physics and Engineering Department, Bob Davis. Davis told Hyun about his other daughter’s job as a medical physicist, a career Hyun hadn’t considered before.

“These little pieces started falling together that felt like the voice of God telling me, ‘Hey, this is where I want you to be,’” Hyun said. “I don't think I've ever felt that way about anything else in my life as strongly as I did at that moment. So I changed my major at orientation to Physics… I felt like it was God's path for me.”

From that moment on, Hyun was single-minded in her pursuit of medical physics. She added a Mathematics minor and loved her math classes, but she couldn’t wait to incorporate medical training into her education.

Finally, her chance arrived her junior year when she did an REU (Research Experience for Undergraduates) summer internship at Indiana University. There, she worked on a proton therapy project seeking to prevent children with cancer from getting secondary cancers later in life from radiation.

Back at Taylor, she assisted some professors as a TA (Teaching Assistant) and tutored other students in quantum mechanics, modern physics, and a few labs and study tables.

Her love of learning and teaching others led her to attend graduate school at University of Wisconsin-Madison, where she earned her PhD in medical physics. Since earning her PhD, she has become more and more confident that she is where she needs to be.

As a professor and radiation oncology physicist at UNMC, Hyun interacts with patients while also teaching and mentoring students from undergrad to residency.

“Observing the physics professors at Taylor was really instrumental in learning what a good teacher looks like,” she said. “I think that's something special about Taylor because it's a smaller school and a Christian school—I saw the same professors often, so I got to know them as people. I really felt like they cared about me as a person, and if I was struggling with something personally, I felt like I could bring it to them. That's something that I try to take into my teaching as well.”

She adores this relational aspect of her job, whether she is watching students’ eyes light up with understanding or helping patients with their treatment plans. Working with people gives her energy and inspires her passion for what she does.

When she is not teaching or helping patients, Hyun has a number of other clinical responsibilities. Hyun often ensures equipment functions properly, helps make sure radioactive material is used safely and effectively, and uses computer modeling and calculations to determine how to deliver radiation while sparing healthy tissue.

One mundane yet crucial part of Hyun’s work is checking patient charts. Looking over patients’ treatment plans to make sure every aspect is documented appropriately is tedious work and often takes all day, but Hyun has found a way to make the process more meaningful.

“I try to make it feel a little bit more personal sometimes by praying for each patient as I go through the list,” Hyun said. “Because each one is a human being with a family, and I know cancer is a devastating thing—and some of our patients are children, some of them have no idea what's going on, and some of them don't speak English. Remembering that each chart represents humans made in the image of God and that He loves them is a good way to personalize those tasks for how important they are.”

Hyun was thrilled when she first heard she won her department’s Medical Physics Teacher of the Year award.

“I felt really honored and kind of humbled, too,” Hyun said. “Receiving a reward for something that you've done in the past can make you want to do even better in the future, so it really gave me more excitement to continue to innovate in education.”

Hyun’s husband Alex is a philosophy professor who specializes in ethics, and one day they hope to bring more ethics education into medical physics residencies and graduate programs. She said the recognition rekindled a fire in her to pursue more projects and keep moving forward.