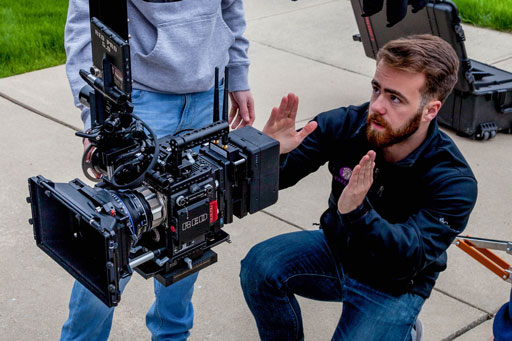 Senior Tim Hudson’s experimental film “Gaspard de la Nuit” won First Place in the Broadcast Education Association’s Festival of Media Arts competition that includes entries from 275 schools nationwide. Hudson’s film will go on to compete in the Best of the Festival competition against all other first place winners.

The Indy Film Festival in Indianapolis selected four Taylor documentaries for screening: “The Aviators: A Father/Son Story,” “Wild Winds: Spirit of the Bison,” “MTXE: Mental Toughness, Xtra Effort,” and “The Bladesmith.” The four short films will screen April 29-May 19. The 2021 festival will be hosted online in 2021, due to Covid-19 restrictions.

Central Michigan’s Adrian International Film Festival selected two Taylor films for screening. “The Aviators: A Father/Son Story” and “Wild Winds: Spirit of the Bison” will screen April 24-25. “The Aviators” features a father and son duo in rural Indiana who are united by their passion for flying and “Wild Winds” is about the caretakers of a buffalo ranch in northeast Indiana.

Finally, the University of Pikeville in Kentucky hosted its annual Film & Media Arts Festival, and five Taylor films were among the official selections. “Bo” by Jake Vriezelaar ’20 screened in the fiction short film category and was made in Professor John Bruner’s Narrative Filmmaking class in spring 2020. It features two sons who attempt to help their family during a drought.

Taylor’s Film and Media Production has earned over 450 recognitions and film festival acceptances, including twelve Crystal Pillar nominations from the regional Emmy organization in 2020.