Sock it to 'em 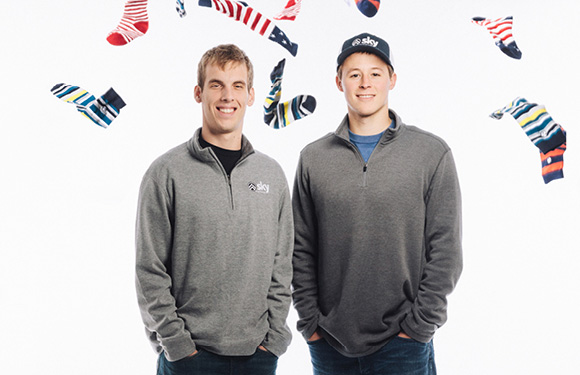 The Taylor men’s basketball team matches from their warm-up jerseys and athletic shorts, down to their socks: simple white crew socks with two black bands across the top.

The socks are from Sky Footwear, a business venture with the mission of spreading hope to the homeless.

Back in high school, Hendricks served the homeless in his hometown of Bloomington, Ind. His eyes were opened to his neighbors’ situations and he felt compelled to act.

“I found myself connecting to many of their stories,” said Hendricks, “and my heart began to break as I learned about the struggle, pain, and hopelessness that most of them face.”

In 2015, Hendricks pitched Sky Footwear to Promising Ventures’ Shark Tank, Taylor’s entrepreneurship competition modeled after the ABC show of the same name. Sky Footwear would be a shoe business and donate a backpack for every pair of shoes sold. Hendricks won second place, gaining funding for his venture.

Earlier, Cellier had expressed interest in helping Hendricks run his previous business, XLSneakerSale. When Hendricks sold the business, Cellier approached him about starting a new business together, and they cofounded Sky Footwear.

Over time and after talks with family and friends, Sky's focus shifted from shoes and backpacks to socks.

The shift was practical: “Socks are the number one requested item from the homeless shelters,” Hendricks said. It also fit a trend Hendricks noticed of people wearing and showing off socks with crazy designs and colorful patterns.

“People warned us going into it, ‘Be careful doing business with your friends,’ but I think it’s actually benefited us and strengthened our relationship.”

Officially launched on August 20, 2016, Sky Footwear follows the “buy one, donate one” business model, donating a pair of socks to a homeless shelter for every pair purchased. Every month, Sky partners with a new shelter.

From communicating with suppliers to creating a website to managing international shipping, Cellier and Hendricks put in hours of work to get Sky Footwear off the ground.

Playing basketball together provided Cellier and Hendricks with a solid foundation for both a flourishing partnership and a strong friendship.

“We’ve seen the ups and downs of each other…so we’ve already been through the trenches of a relationship,” Hendricks said.

“People warned us going into it, ‘Be careful doing business with your friends,’ but I think it’s actually benefited us and strengthened our relationship,” Cellier added. “I think we found out that we work well together.”

During preseason conditioning, Cellier and Hendricks went to the shelter with some of their teammates to hand out the socks donated for that month.

Since its launch this past August, Sky has donated over 1,460 pairs of socks to homeless shelters in locations ranging from Bloomington to Indianapolis, Ind., and Toledo, Ohio.

Sky first partnered with Wheeler Mission in Indianapolis. Late September during preseason conditioning, Cellier and Hendricks went to the shelter with some of their teammates to hand out the socks donated for that month. “Our guys on the basketball team have been on board one hundred percent,” Cellier said.

Sky Footwear’s other partnering shelters have included Cherry Street Mission in Toledo, Shalom Community Center in Bloomington, and for the month of January, Milwaukee Rescue Mission in Milwaukee, Wis.

As for Sky Footwear’s future, plans are still in the works. Cellier will graduate this May and Hendricks will graduate next year. Both would like to take the business full-time if it becomes possible.

“I’ve enjoyed doing it. It’s been a blast working with Keaton,” Cellier said.

Handing out the socks personally has had an impact on Hendricks. He has come to realize that homeless people are thankful for anything.

“A small gift, as simple as a pair of socks, meant a lot to the individuals,” he said.

At the end of the day, Cellier and Hendricks aim to simply spread hope. “You may never know what can spark a change in someone’s life [and] make their day,” Hendricks said.