Shooting for the Stars 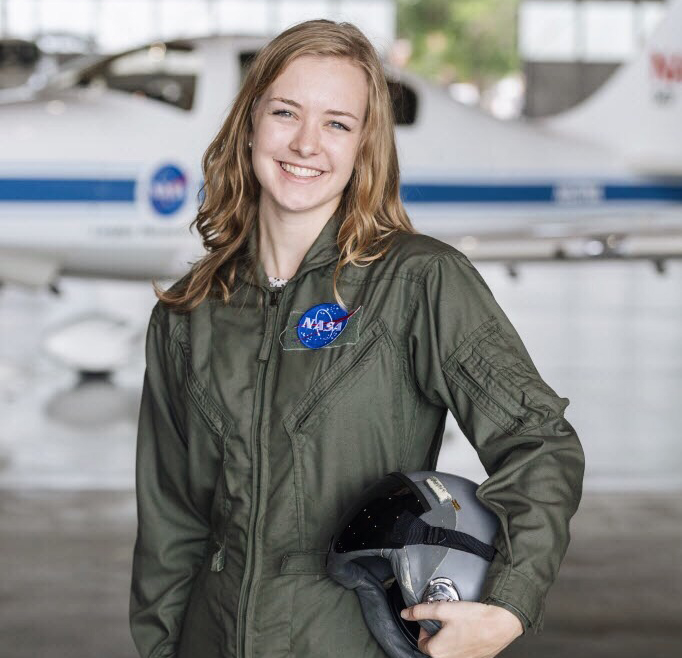 Junior Hannah King never dreamed she’d have the chance to work at NASA, but after lots of hard work and dedication, she will be interning at the Langley Research Center in Hampton, Virginia, this summer.

King will intern at NASA for approximately 10 weeks, starting during the first week of June up and continuing through the second week of August.

Although she doesn’t know the specific project she’ll be working on while at Langley, King will be leveraging her experience from her Mathematics major and Physics minor to analyze data from the SAGE III, or Stratospheric Aerosol and Gas Experiment, project. According to King, the data gathered from a device on the International Space Station (ISS) during the first two SAGE missions helped shape what scientists know about the hole in the Ozone layer.

King has dreamed about this opportunity for years. Her interest in working with NASA was sparked by the 2016 feature film “Hidden Figures,” which depicted the real-life story of women doing research for the program. And the film takes place at the Langley Research Center, the same place where Hannah will be working and the original center for the NACA organization before it became NASA.

King applied to the NASA internship program last year, but was unsuccessful in receiving a position. She instead pursued a research opportunity at the University of Texas at Tyler during the summer.

“When I heard about [the NASA opportunity] my freshman year, it seemed really distant, like this dream that I wouldn’t reach,” said King. “But now, knowing I’m going to work there and seeing all the hard work I put in leading up to this, seeing last summer maybe I didn’t get it and I worked with a really incredible research opportunity, everything along the way was a gift and eventually got me to this point.”

When asked about King’s successful entry into the NASA program, Dr. Derek Thompson, an Associate Professor of Mathematics and King’s academic advisor, didn’t shy away from crediting it all toward her hard work. He explained the typical three-stage act he and King tend to go through together when she faces a “crazy challenge—whether an exam, a research opportunity, an internship, or something else,” he said, for the first act.

“Second, she tells me how insurmountably difficult the challenge is,” said Thompson. “Finally, in the third act, she goes and completely obliterates the challenge. I just make sure my phone is on and my email is open to listen during act two, and then she goes and does the rest.”

King is not the first Taylor student to intern at NASA. Ellie Grace Moore, a junior Mathematics Education major, did her internship with NASA last spring, although she worked at the Kennedy Space Center in Florida.

King said she’s most excited about being able to apply her knowledge and skills she’s learned from classes. She’s also looking forward to the opportunity to learn about different roles at NASA that she might not have previously known about.

“I think, in my mind ... there are just one or two jobs that I could possibly do, but I know NASA’s so much bigger than that, and there are many different possibilities and different roles,” she said. “Even some roles that I don’t know of yet. So seeing how my strengths can fit into the roles and if there’s going to be something that I feel is going to be really fulfilling. I think that’ll be good to see.”

She feels the most challenging part of the internship will be facing her, often falling susceptible to “imposter syndrome.”

“I think as individuals, as a whole, but also as females in STEM, it’s easy to go into projects and worry that ‘Oh I don’t have this, this, and this,’ and then it definitely makes you a little nervous and makes [work] a little bit harder,” she said. “But I think one thing I did learn last summer is ... as long as you do your best and just be yourself, then that’s enough because the person [who hired you] knows who they’re hiring even if you’re worried that they don’t.”

Her advice for any students looking to follow in her path is to continue working hard and letting yourself dream. “I would say if you feel like you are being called to do that or you feel like work like that is fulfilling, then pursue it—no matter how big the goal is or how big the dream is,” she said.

Thompson believes King’s success of getting the internship is fantastic and speaks highly of the Mathematics department at Taylor, calling it one of the best in the country.

“It was true long before I got here. Jeremy Case, Mark Colgan, Ron Bendow, Matt DeLong, and others created an incredible program that I was lucky enough to join,” he said. “If there’s a prestigious program or internship in mathematics, our majors have done it.”

As for the future, King is still deciding between an academic career or a job in an industry setting. Last summer’s research opportunity provided experience with the academic side, so she said, “Hopefully this summer will give me an idea of what it looks like to work with a company and what those different roles look like.”

Thompson’s advice for King? “You deserve this. Go have the time of your life,” he said. “I’ll have my phone on, just in case.”