Running Towards a Medical Career 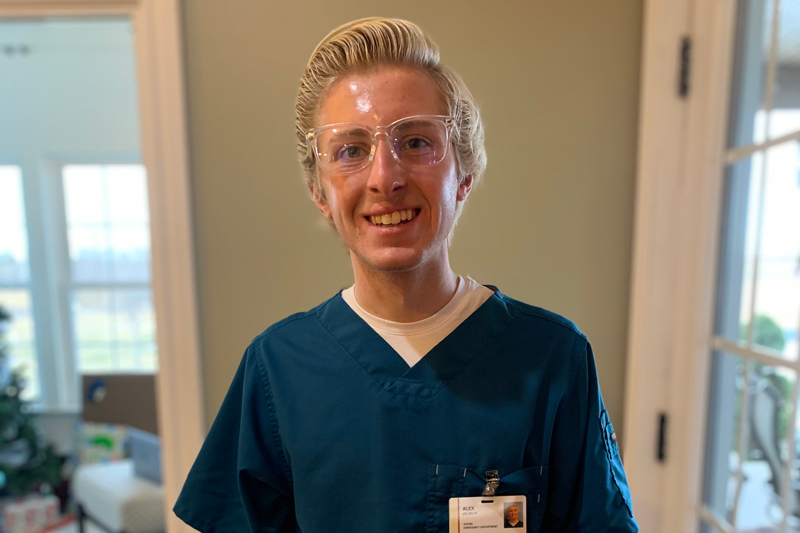 Some schools might force you to choose between pursuing a challenging academic workload or being a successful student athlete. Not Taylor. Senior Alex Helmuth exemplifies how you can be a busy pre-medical student and still take part in the sport you love. In fact, all of Taylor’s athletic teams average a 3.0 or higher GPA, placing Taylor first in the nation among NAIA schools.

As a Biochemistry Pre-Med major with minors in Spanish and Philosophy, a cross country and track scholarship, a volunteer position at the Diabetes Clinic, and a job working as a medical scribe, Helmuth makes staying busy his business.

“It's definitely a time management, priorities/decision-making process,” Helmuth said. “It's a craft—you need to be on your A-game; you really need to make sure you are setting yourself up for success academically and athletically. Sometimes you have to sacrifice things to make other things a priority, and that's something I've done and I don't really regret it.”

Helmuth was raised by a nurse practitioner mom, so his desire for a career in medicine came early. He also knew that he did not want to give up his love of running. He was concerned that if he went to a college on an athletic scholarship, his time would be torn between his degree and his passion.

“I was originally looking at a bigger institution that had more medical opportunities,” Helmuth said, “But I definitely wanted to further my running, and a lot of colleges basically said ‘you have to choose between academics and athletics—it's going to be hard to balance both.’ But Taylor didn't say that. I talked to the coaching staff here, and they were very open minded about how I can choose to do a harder major, like Biochemistry or the Pre-Med routes, while also running. They sold me on that and the rest is history.”

Applying Classroom Knowledge in the ER

Choosing a Biochemistry Pre-Med major came easily, and as Helmuth took classes through every summer, he realized he had credit hours available to add on minors in Philosophy and Spanish. Helmuth originally added the Spanish minor because he wanted the chance to study abroad in Ecuador, but because of Covid-19 and conflicting scheduling, this dream never became a reality.

However, Helmuth found he can still use his Spanish knowledge in his career.

“I truly want to become fluent in Spanish; I would love to be bilingual as a physician, regardless of what specialty,” Helmuth said. “When I go to medical school, I want to find a medical program that has a Spanish concentration where they develop Spanish-speaking doctors. With Spanish being so frequently spoken in America, I would love to have that opportunity to be bilingual, and I would love to bring in medicine and Spanish and combine them into one.”

Helmuth has already been able to use his Spanish knowledge at his job in the ER as a medical scribe. His job includes following around a healthcare professional and transcribing their notes, collecting the patient’s information, and documenting the entirety of the patient’s visit.

Helmuth frequently meets Spanish-speaking patients on his shift, and he tries to make them feel as comfortable as possible by communicating with them in their language.

Working in the ER as a medical scribe, Helmuth has encountered pain in countless forms. These hardships include witnessing death and having to transcribe the death certificates while simultaneously wrestling with his faith.

“I think the one most challenging parts that (teachers) never told me in training is when you have to see death happen,” Helmuth said. “I'm now at twenty death certificates that I've had to type up—the time of death being called, the family coming back and telling them the patient did not make it—that will never get easier. You get a different view and outlook on healthcare because we sometimes can't do enough to save a patient.”

Helmuth is able to talk about a hard shift with the doctors he follows as a scribe, but sometimes the hurt follows him home. His job encouraged him to learn how to healthily address traumatic situations, including giving these struggles over to God.

“We are way more finite than I originally thought we are,” Helmuth said. “Life is a gift, regardless of if you have faith or not. Seeing the beauty of life that God has given us has been something that I've worked on not taking for granted. It's put in perspective that we might not always know the answers, but we have opportunities to play the role that we were given.”

As Prepared as Possible

Helmuth is still deciding which medical specialty he wants to pursue, but he knows he wants it to be high-intensity to mimic the adrenaline in the ER.

He plans to apply to graduate programs at the end of the semester, but Helmuth doesn’t plan on jumping right into another degree program right away. Instead, he wants to take a gap year to focus on his running and pursue marathon training in hopes to hit Olympic running time by November.

Helmuth views his multiple passions as a strength that benefits him as a medical school applicant and a person, and he hopes he won’t ever have to sacrifice one of his passions to pursue another.

“From an education standpoint, I definitely feel as best prepared as possible,” Helmuth said. “We have opportunities at Taylor that get you direct patient interaction that you might not get at a bigger institution. You can grow as a student but also grow as someone who wants to pursue medicine. Participating in athletics and being a leader on the team—all these experiences helped me become a more person-focused applicant.”

At Taylor, we’re 100% committed to helping you find your specific calling in healthcare. You will have many options, and we’re here to help you discover your best path. As a student-focused university, we’ll be there to advise and support you throughout the entire process—all the way through applying to graduate school. Schedule your campus visit today to see our academic programs and outstanding community in action.