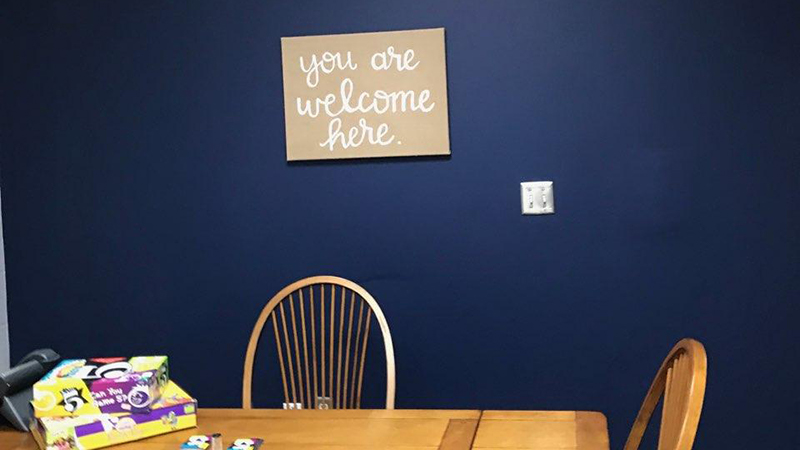 Those items aren’t usually part of a welcoming and comfortable atmosphere, which is exactly what members of the Student Social Work Organization thought when they toured TRU Harbor, a 16-bed residential therapeutic center for girls who have been rescued from the sex trafficking industry.

Last spring, the students visited to see what they could do to help the center. Located in New Castle, IN, the facility was a former juvenile justice facility and had been closed years prior to TRU Harbor renovating it. As a program of the Youth Opportunity Center, TRU Harbor is the first residential facility in Indiana to specifically care for survivors of sex trafficking, according to senior Alora Pradel, one of the member of the SSWO.

“Sex trafficking is modern day slavery. It is a multi-billion dollar industry worldwide that preys on our vulnerable brothers and sisters,” she said. “As a department that fights for the worth and dignity of every individual, we [the Taylor Social Work department] knew we needed to support this organization that brings new life to those who have been robbed of their freedom.”

After meeting with the director of the facility, the group wanted to partner with the center in a way that would be the most helpful in the center’s eyes. “We did not want to come in with our own ideas of what ‘helping’ would look like, so we met with [the director] to learn more about their particular needs,” said Pradel.

TRU Harbor allowed different organizations to “adopt” rooms in the center, which meant creating a welcoming and restorative space that was also functional for the center’s needs.

Taylor’s Social Work majors decided to furnish and decorate the family visitation room, since it was “your typical criminal justice type of setting, with everything bolted to the floor,” according to Cathy Harner, Taylor’s Director of Social Work and former faculty advisor for the SSWO.

“We knew that would be a space where young women could be with their families that they had not seen in a while, and we wanted that space to feel as healing and home-y as possible,” said Pradel, since the facility is for girls ages 11-18.

To furnish and decorate the room, the group raised just over $4,450 through partnering with local businesses. The Jumping Bean, for example, set aside a day where they donated a quarter of each cup they sold to the group’s efforts. The baristas were also willing to donate their tips for that day, resulting in $400 from the Bean alone.

Another fundraising effort came through the Social Work department’s Community Advisory Board, after Pradel presented the project to the board. “Unexpectedly, the multiple members of the board gave very large donations, some over $1,000, for which I can never fully express my gratitude,” said Pradel.

The group went to Webb’s in Gas City and Comforts of Home in Marion to purchase two gray couches, a dark brown coffee table, and a dining room table with four chairs. They also supplied original artwork, created by a student, and games, like Apples to Apples, for the families to use when they visit the girls.

To honor the SSWO’s adoption of a room, TRU Harbor invited the Taylor students to its open house on April 19th, which displayed signs on the rooms detailing which group furnished and decorated them.

However, when the students toured the area, they noticed the social workers’ room had all the old furniture from the family visitation room. “[Seeing the old furniture] broke their hearts. It was just sad,” said Harner.

So the Social Work majors used some of the extra money from the fundraisers to purchase new furniture for the social workers’ office, in addition to a bookcase for the reception area.

They also wanted to do something for the girls themselves and decided to make therapy blankets for them. Therapy blankets are two pieces of fabric that are cut along the edges and tied together.

“We want to be able to be the hands and feet of Jesus as we’re giving, so [the SSWO] made therapy blankets,” said Harner. “The idea with those was they’d keep them in storage and as a girl came, they would get this as a gift from our kids.”

“We wanted to provide these for the girls because when they transition out of TRU Harbor, they are sent with as many personal items as the organization can provide them, so we wanted each girl to be able to have her own therapy blanket,” said Pradel. “It is something soft and safe that they can call their own.”

The group enjoyed working with TRU Harbor and supporting their efforts, and the feeling was mutual. Dr. Katrina Mallory, the Program Director of TRU Harbor, praised the Taylor students and Harner for thoughtfully investing in the girls and the facility’s mission.

“[The students] were also very interested in knowing more about human trafficking in general, so they asked me a lot of questions about what trafficking looks like in Indiana and just trying to do whatever they could do to learn more about it, so I really appreciated that because I feel like, even beyond them just donating things for our girls—which is, of course, awesome—they were trying to learn as well,” said Mallory.

“[TRU Harbor] seem[s] to really be doing good and meeting the needs of a population that’s typically forgotten about,” said Harner. “A lot of times we tend to blame the victims and if we can actually intervene and help, that’s what social work is for—finding the people.

“I’ve been impressed with our students,” continued Harner. “They’ve been able to pull together to actually make such a difference. It was never a hardship for them.”