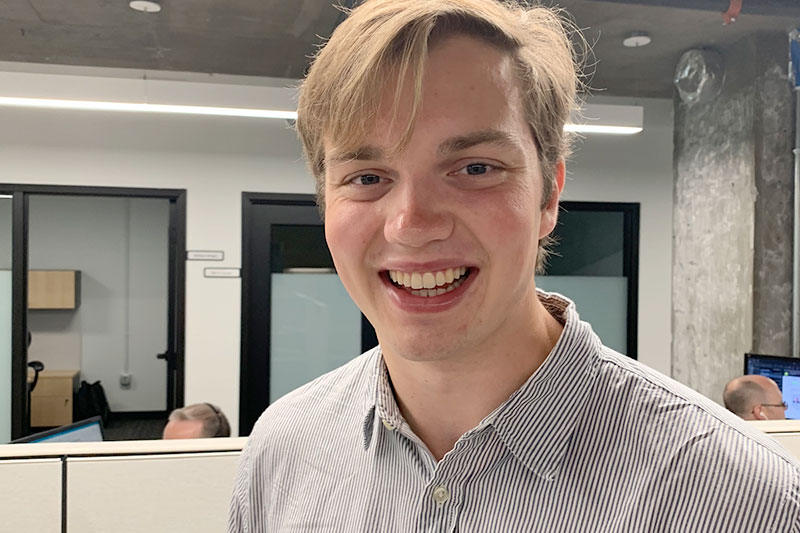 Developing real-world skills requires real-world experience. That’s why at Taylor, students are not only challenged in the classroom, but guided through practicums and internships with professionals in their field.

For recently-graduated Multimedia Journalism major Justin Chapman ‘20, an internship with Indiana Business Journal (IBJ) was just the experience he needed.

Justin connected with Indiana Business Journal during a field trip with his Magazine and Feature Writing class his junior year. He acquired an internship there the following summer, an experience which appealed to him because he was excited to push himself as a writer and reporter.

During his internship, Justin called and interviewed sources, wrote stories, and did research for IBJ. He even got multiple stories published and gained valuable experience by being pushed out of his comfort zone.

Before his internship at IBJ, Justin wrote news and sports stories for Taylor’s student publication, The Echo, which primarily focuses on local events and Taylor-affiliated news. After working for IBJ, he feels more confident writing about topics he is less familiar with, such as hotel grand openings and investments.

“One thing Taylor has taught me well is to prepare,” Justin said. “When going into an interview, I learned to have questions in mind and make sure my angle is clear for the story. If I do bad reporting, then the story will be poorly written. So, when I'm assigned a story that I don't know much about, doing research and making sure I have good questions is critical.”

Growing Confidence as a Reporter and Editor

Justin felt more confident in his abilities after stretching himself at Indiana Business Journal. He developed a new appreciation for the industry and the people working within it, cultivated curiosity for the stories all around him, and practiced new ways to think outside the box, all of which have helped him grow as a reporter.

“As always, God was present in every situation,” Justin said. “When I felt overwhelmed and under-qualified to do the work I was tasked with, I always felt a sense of peace and confidence to move on and do my best… When I was joyful, I noticed how God gave me these gifts to write and communicate, and when I used them well to glorify Him, a sense of satisfaction followed.”

During his senior year, Justin was editor-in-chief of The Echo, leading dozens of other student writers and editors in the pursuit of a good story every week. On top of that managerial role, Justin still wrote regularly for the sports section, keeping him in the practical work of writing stories. He’s thankful for his preparation though Taylor’s Communication department and for those who believed in him along the way.