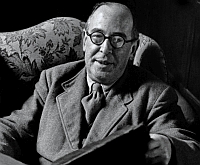 Dr. Matthew Dickerson, professor at Middlebury College and author of several books on the writings of C.S. Lewis and J.R.R. Tolkien, will appear at Taylor University February 8-10. He will speak on Monday and Wednesday morning during the 10:00 a.m. chapel services. He will also present talks on the two legendary authors during Monday and Tuesday evening sessions to which the public is invited. There is no charge for attendance.

The Christian Agrarianism of C.S. Lewis and J.R.R. Tolkien

Dickerson’s appearance is being co-sponsored by Taylor’s Staley Distinguished Christian Scholar Lecture Program and the Center for the Study of C.S. Lewis and Friends.

Matthew Dickerson is a professor at Middlebury College in Vermont and the author of several books. His most recent published works include a fantasy novel titled The Gifted (AMG, 2015), a medieval historical novel The Rood and the Torc: the Song of Kristinge, Son of Finn (Wings Press, 2014), and two works of creative non-fiction nature-writing: Downstream: Reflections on Brook Trout, Fly Fishing, and the Waters of Appalachia (with David O’Hara, Cascade Press, 2014) and Trout in the Desert: On Fly Fishing, Human Habits, and the Cold Waters of the Arid Southwest (Wings Press, 2015). He has also published several books, book chapters, and articles on the writings of J.R.R. Tolkien and C.S. Lewis including Ents, Elves and Eriador: the Environmental Vision of J.R.R. Tolkien (with Jonathan Evans), Narnia and the Fields of Arbol: the Environmental Vision of C.S. Lewis (with David O'Hara), and most recently A Hobbit Journey: Discovering the Enchantment of J.R.R. Tolkien’s Middle-earth.

He holds a PhD in Computer Science from Cornell University where he also did graduate work in Old English Language and Literature. At Middlebury College, he is a member of the Department of Computer Science, an affiliate of the Program of Environmental Studies, a past Director of the New England Young Writers Conference at Bread Loaf, and a regular contributor to the Writing Program. His songwriting and recording has received national radio airplay first with the blues band Deep Freyed and more recently with the roots gospel and roots Americana duet Dickerson and Nop.