Learning as They Serve 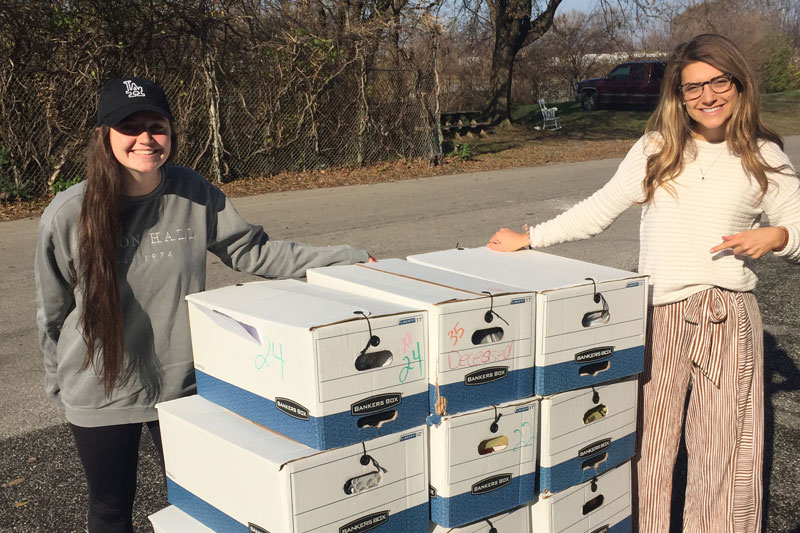 Taylor’s academic programs equip students to think critically, find creative solutions, and develop a sense of God-given purpose in their disciplines through service and hands-on experiences.

For students studying Public Relations (PR), another opportunity comes through Taylor’s PR Cases & Campaigns course. Students create and execute campaigns for real clients and are expected to deliver quality results, all of which opens the door for valuable service learning.

Prior to the pandemic, Associate Professor of Communication Donna Downs would select four local clients for students to work with over the course of a semester. These clients could include a local private school, a fitness studio, a nonprofit organization, or even an animal shelter. Students split into teams to help these clients meet their goals.

“Students learn as they serve and serve as they learn,” Downs said. “Working with real-world clients helps them take the class seriously; they know they’re responsible for results not just to me but to those outside the university.”

This year, to reduce the amount of off-campus contact and potential viral transmission, Downs decided it would be best to have the entire class focus on one campaign.

Choosing their goal was the next step, and sophomore Claire Nieshalla approached Downs with an idea that had been on her heart for years: bringing awareness to the opioid crisis in Indiana.

While in high school in her hometown of Zionsville, Indiana, Nieshalla won the title of Miss Fall Festival’s Outstanding Teen. Bringing awareness to substance abuse was her platform during the pageant, and she organized an event where the public could properly dispose of unneeded and expired prescription drugs from their medicine cabinets. The event was the first of its kind to take place on a public high school campus, and Nieshalla wanted to bring it to Taylor as well.

“I chose my platform to be substance abuse prevention because it's an issue in our county, in our state, in our nation, and our world,” Nieshalla said.

Downs liked the idea and connected with Marion General Hospital’s Community Opioid Response and Evaluation (CORE) group, which became a partner to fund their class campaign.

“For this class, the main goals are learning to create a case study and learning to create a public relations campaign,” Downs said. “Students began by completing case studies of the opioid crisis in the Midwest, which gave them insight into the problem. They then focused on Indiana, more specifically Grant County, and learned the different steps of how to create a campaign, from research to planning to implementation to evaluation.”

To get the vital initial context, Nieshalla referred to a national statistic that stated, “Misuse of prescription drugs is highest among young adults ages 18 to 25, with 14.4 percent reporting nonmedical use in the past year. Among youth ages 12 to 17, 4.9 percent reported past-year nonmedical use of prescription medications.” Equipped with this knowledge and further case study research, the class rallied together to brainstorm a campaign plan.

The class split into four groups, each with their own objective. One raised awareness of the opioid crisis in 4th through 6th graders local to Grant County. One connected with local churches to provide materials for their congregations. One reached out to nearby universities, and one planned the drug take-back event.

Junior Ela Alvarado worked on the team that built relationships with local churches. She enjoyed using the skills she’d learned from previous classes, noting how the digital tools classes at Taylor helped her design educational infographics and brochures, her Social Media Strategy class showed her how to write succinctly, and PR Writing & Production helped fine-tune professionalism.

This interconnectedness was present throughout the development of the campaign, solidifying why Alvarado loves her field of study.

“I’ve always loved communication in all its forms, whether that was videos or pictures or writing,” Alvarado said. “I think what compelled me the most about PR was the writing aspect and I knew I wanted to really hone my writing skills through the major. I consider myself a very versatile storyteller, so I like that PR involves all forms of communication...That's what I love the most about my major—no matter what I want to do after Taylor, I know I have a lot of open doors.”

Alvarado said PR Cases & Campaigns equipped her with additional experience in problem solving and accommodating clients’ needs, experiences which she found incredibly rewarding. In fact, one of her favorite projects during the semester-long campaign was creating a video for Hope House, a Christ-centered recovery program in the nearby city of Marion. The Chief Empathy Officer of Hope House, Shane Beal, shared his journey of recovery, and Alvarado was encouraged to hear how God worked in his life.

“Being able to edit that video and use my God-given skills to promote that story about suffering with each other and helping each other to become more like Christ was very beautiful,” Alvarado said. “It's just amazing how God really works to share a message of restoration through social media and through our work as communicators.”

Meanwhile, Nieshalla and her event planning group worked hard to prepare the take back event itself. All was going according to plan and everything was lined up for the event on November 21, when suddenly two of their partners for disposing of the drugs fell through. This component was crucial; the day would not be possible without proper disposal.

Uncertain how to proceed, the group circled together in Downs’ office and prayed for a solution. A few days later, after making several phone calls, Nieshalla got in touch with Covanta in Indianapolis. Covanta supported their campaign mission so much that they even discounted the disposal price for the drugs, a welcome surprise for the group.

Two days before the event, Nieshalla stopped to pray at the drug take back day’s location. She grieved over the precious lives lost to addiction and overdose and asked the Lord to bless their efforts. Their goal was to collect 200 lbs. of prescription drugs.

Communications for the Community

On the day of the event, from 8 am to 4 pm, the PR Cases & Campaigns class worked with local law enforcement to collect the prescription drugs from individuals and families. It functioned like a drive-thru in Gas City’s Neighborhood Fresh Market parking lot—cars pulled up, exchanged their drugs for a goodie bag, and masked students wished them a happy Thanksgiving as they drove away. 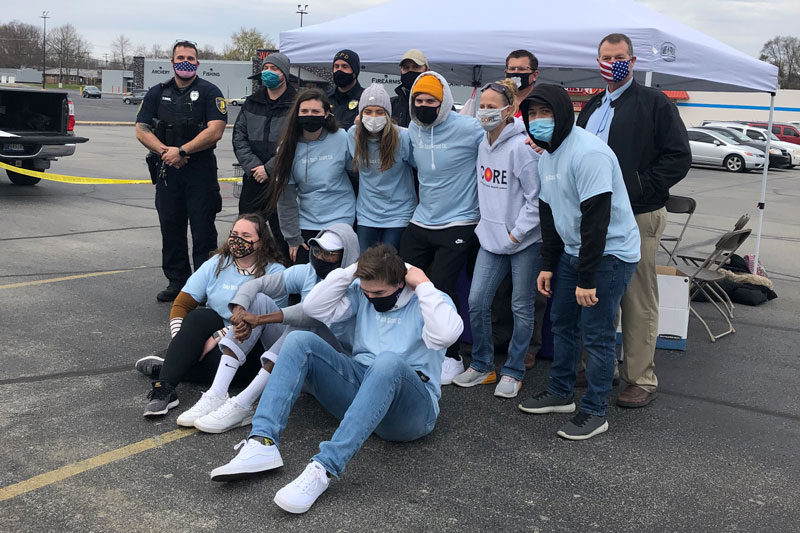 In total, the group collected 174 lbs. of unneeded or expired drugs. Even though they did not meet their weight goal, they were delighted they met each of their other objectives.

“We really felt like we were working on a real campaign, and we were,” Nieshalla said. “We went into this semester saying if one life is changed, if one bottle of drugs is dropped off that is no longer vulnerable for abuse, then we were successful, and it was much more than that. We heard a lot of stories that day—including one couple whose son passed away two weeks before from overdose. We know firsthand, after hearing story after story, that we’re making an impact.”

Through the PR Cases & Campaigns class, Nieshalla, Alvarado, and their classmates used their passions and talents to explore an issue some were unaware of. They took advantage of this opportunity to engage in civic responsibility while developing their skills as communicators.

“As their professor, I’m proud of my students and their accomplishments,” Downs said. “In their final reflections, all believed they learned and grew from the experiences of the class, and they understood the impact they made and can continue to make in this community and those in which they live. The essence of serving God and others comes alive even more when we see the rewards of our labor.”