Jazz Ensemble Presents A Tribute to the Beatles 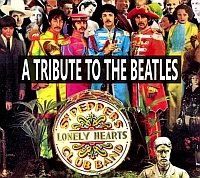 The Taylor University Jazz Ensemble will present A Tribute to the Beatles, an evening of Beatles music arranged for big band, on Tuesday, November 14, at 7:30 pm. in the Rediger Chapel/Auditorium.

The music's arranger is Mike Tomaro, director of the jazz studies program at Duquesne University in Pittsburgh, Pa. Included in the program are Beatles classics that include: Come Together, Here Comes the Sun, Lady Madonna, Norwegian Wood, A Hard Day’s Night, Blackbird, and We Can Work it Out.

The Beatles burst upon the American music scene and wider culture on Sunday, February 9, 1964, when the band made a televised appearance on the Ed Sullivan Show, a program that was watched by an estimated that 73 million viewers and launched the phenomenon of “Beatlemania.”

This concert is sure to bring back memories for older audience members while providing new insights for younger guests who enjoy Beatles music. A large audience is expected, so come early to get a good seat!

There is no charge for admission and the entire community is invited.