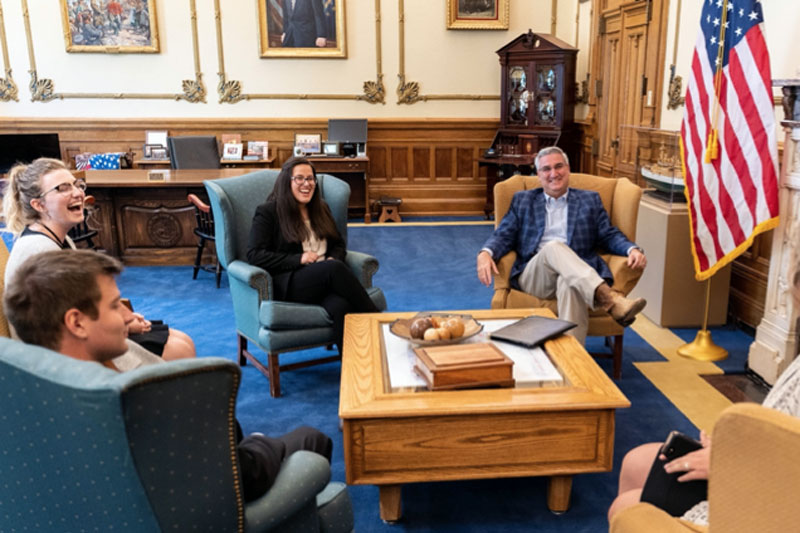 Students who major in the Social Sciences at Taylor learn to analyze information, think abstractly, write and present information well, work with clients and ask challenging questions. They are equipped to promote redemption and change in our increasingly complex world. The Social Sciences emphasize the importance of embracing and learning from history, appreciating human diversity and recognizing the interconnectedness of social life.

For alumna Abby (Crump) Chapman ‘19, studying Social Work prepared her to become the Indiana Main Street Outreach and Organization Manager for the Indiana Office of Community and Rural Affairs (OCRA). In this role, Chapman has been able to live her passion: to be a helpful resource to the individuals and communities around her.

A Heart to Help

Chapman had a heart to serve others from a young age. She grew up in a people-centered family with her mom, a nurse who did some case management in hospital settings; her sister, a social worker; her brother, a mental health therapist, and her dad, a pastor. Chapman knew she wanted to create positive change in her community, too.

When Chapman considered coming to Taylor, she was torn between two career paths that could accomplish this goal: Psychology and Social Work. She thought she might end up being a therapist like her brother, but was drawn to social work because of the numerous possibilities within the field.

“When I came for an overnight visit at Taylor, I sat down with Cathy Harner, who used to be the head of the social work department before she retired,” Chapman said. “The way she talked about the social work program and how the realities of the profession and our faith come together really pushed my decision over the edge.”

When Chapman came her freshman year, she was thrilled with her choice to declare social work as her major. She described the degree as “holistic,” and she still got to take psychology courses, business courses, and others she found interesting. She liked being able to try different things, getting a taste of other fields of study while still pursuing social work.

This diverse background would give her a strong foundation for her eventual state government job as Indiana Main Street Outreach and Organization Manager.

“On the education side of things, I don't think there's anything more valuable than having an education that is well-rounded,” Chapman said. “Obviously, going to a liberal arts school, that's something we just do—we get to take classes in history and music and all these different areas.”

Chapman completed two practicums to earn her social degree. One J-Term, she worked in Washington, D.C. as an intern at Girls Inc., an organization that inspires girls facing poverty and prejudice to be strong, smart and bold. She also did an internship with Affordable Housing in Marion, where she discovered her new interest in community development.

“Within the social work department, I love just how hands-on everything is—we weren't just sitting in a classroom talking about it, but often we would have to go out and do projects in the communities, and work with people we actually do real life interviews with,” Chapman said. “Nothing is better than just going out there and actually trying to do what you're learning, and I loved how across the board at Taylor they are big about having those real-world experiences.”

When Chapman graduated and began her job hunt, she found The Governor's Fellowship, a year long program for postgraduates to see what state government work looks like. Graduates get three-month rotations to see different agencies, gain broad experience and network.

Chapman was accepted into this program, and when she was asked about where she wanted her first rotation to be, she said wanted to work at the Office of Community and Rural Affairs (OCRA). She became very connected at that agency and asked if she could stay for another three months. She ended up remaining at OCRA because of how much she loved it.

Once her time as a Governor’s Fellowship was up, a new position was created in the agency to work with Indiana’s Main Street organization. Main Street is a local and national nonprofit movement dedicated to the revitalization and preservation of historic downtowns across the country—and in Indiana, this mostly involves rural communities.

Chapman applied and was hired in January of 2020, a few short months before Covid-19 would shake the globe.

Pre-Covid, Chapman traveled 2-3 days out of the week to one of the 128 Main Street communities her agency serves. There, her day could involve meeting with a community director, who might show her around the downtown area and ask questions. She might travel there to do an assessment for their accreditation status, or go to celebrate a grant they’d been awarded for a new streetscape, water infrastructure or perhaps a historic renovation. Each day brought something new and different, something she liked.

Now, Chapman does most of these meetings over Zoom, a transition not unique to her situation. In her phone calls and digital meetings, she talks to directors having issues in their communities so they can share, process, and brainstorm next steps. Chapman oversees a lot of project management, like scoring and reviewing grants and advocating for communities to be accredited by Main Street.

“My social work classes gave me a foundation and so much knowledge to be able to go into this job confidently,” Chapman said. “But I also think back to those other things that had nothing to do with my social work degree that still really help me today.”

Chapman’s advice for students considering social work is to be willing to hear a variety of perspectives, even those they may have strong opinions about.

“One of the biggest things that I would stress to someone coming into the program is to be willing to listen and learn from one another—your peers, your professors, other people, even just those on your floor at Taylor,” Chapman said. “I think that's one of the greatest things that I learned through the social work program—how to listen to others’ experiences that weren't like mine, which then allowed me to be able to work through any of my own biases. Be willing to learn and don’t be afraid to enter into conversations that might feel a little bit uncomfy.”

Beyond her social work education, Chapman said her spiritual development at Taylor was enriched by working as a DA (Discipleship Assistant) her sophomore year and a PA (Personal Assistant, similar to an RA) her junior year.

She said these roles taught how to sit in conflict and work with all types of people with different ways of approaching things. Creating a sense of community even amidst times of tension prepared her in a way she didn’t expect.

“Pre-college, I was a very conflict-averse person—I did not like conflict, did not want to be a part of it and it scared me,” Chapman said. “But now, I can be much more bold and I can talk through it and process it well, so these experiences at Taylor made me a better Christ follower. Having a firm foundation of faith and what I believed when launched out into the real world has really been my base. I couldn't do anything I'm doing without the Lord, so having my faith be built up at Taylor was just awesome.”

She said that living alongside others at Taylor introduced her to devoted friends, people who she considers her support system to this day. Whether meeting people in her major, residence hall or on her two Spring Break Missions Trips to Russia, she expressed gratitude to those who made her Taylor experience the transformative four years it was.

“There really is no community like what Taylor has to offer,” Chapman said. “One of the coolest things about Taylor's community is that you get the opportunity to meet so many different people and you get to live with people in a really close knit community—which can be hard and challenging and a lot of other pieces, but can also be really, really rewarding and give you some of your greatest lifelong friends.”